I Want to Marry a Lighthouse Keeper 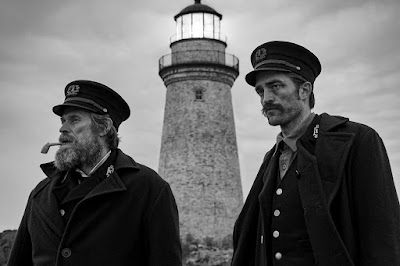 I use the phrase “fever dream” a lot, I’ve realized, but sometimes there is simply no better way to describe what it is that I’m seeing. The Lighthouse is probably most easily described as that, a sort of slow but onrushing descent into insanity. Everything about the film is designed to enhance that feeling. The story, ultimately, feels like H.P. Lovecraft attempting to tell his own version of a Poe story like “The Tell-Tale Heart.” I have no other way to explain this movie, and there’s a part of me that doesn’t really want to try. This is a film that touches something deep and primal and not easily put into words.

At the same time, I’m reminded of a Ray Bradbury story called “The Fog Horn” about two men in a lighthouse. One night, the fog horn attracts a primal creature from the depths of the ocean that has seemingly fallen in love with the noise that the lighthouse makes. Frustrated, the creature eventually knocks the lighthouse down, and then is despondent over the death of the thing that it loves. There’s a deep sadness in that little story, a weird longing and a primal ache, and a little bit of the madness that drives a film like The Lighthouse.

Late in the 19th century, or perhaps early in the 20th, a man named Ephraim Winslow (Robert Pattinson) signs up for a stint as a lighthouse keeper, typically called a “wickie.” The job involves a four-week stint on a deserted New England island under an irascible man named Thomas Wake (Willem Dafoe). It doesn’t take Winslow long to notice that Thomas Wake has some odd behaviors. Despite that the manual says that the two of them will trade off jobs regularly, Wake decides that the lantern is his responsibility. He keeps the area locked, and Winslow believes that he is stripping down to his skin while alone with the light.

As the person in charge, Wake is comfortable giving the worst jobs to Winslow, and he doesn’t shirk in doing just that. Winslow is given all of the difficult and messy jobs, and Wake does nothing but complain about his work ethic. It’s also soon revealed that Winslow is frequently hounded by a one-eyed gull that he has been told to leave alone. Wake, a former sailor, is convinced that sea birds contain the souls of dead sailors, and killing one brings nothing but pain.

But how much of this is real? How much of this is Winslow slowly losing his grip on reality? Certainly the mermaid (Valeriia Karaman) he believes that has washed up on the shore of the island is a part of his imagination. Or is it?

The Lighthouse is a film in which every part of it has been designed to elicit a particular mood. This is a dangerous film in the sense that it evokes something very primal. There is a darkness here that isn’t simply about two men being perhaps abandoned in a lighthouse for four weeks together. No, there is something much deeper and darker here, and everything from the film stock to the lighting is there to make the film look disturbing and primordial.

Robert Pattinson made a great deal of money for his roles in the Twilight films and is now essentially doing what he wants. What he wants is making movies like The Lighthouse, and I say good on him. Willem Dafoe has always been more than a little around the corner. The two men are perfectly cast here, both dependent on each other and antagonizing of each other.

In fact, this is one of the aspects of The Lighthouse that really makes it work. Winslow’s slow mental decline could be just that—him losing his mind due to the isolation and abuse from Wake. Or it could be something Wake is doing to him. Wake’s story of why he is no longer a sailor changes; sometimes it’s because he broke his leg while other times it’s because of scurvy. The two men clearly hate each other, but are dependent on each other, and have moments of obvious homoeroticism. Or is this just more of Winslow’s fragmenting sanity manifesting as well?

I don’t really want to say a lot here. Again, I don’t think I have the words, but I also don’t think I want them. This film is like insanity placed on film and dragged shrieking across the screen. If the next They Shoot Zombies and/or 1001 Movies lists don’t contain this film, I have to wonder what the hell they’re thinking.

Why to watch The Lighthouse: It’s indescribable.
Why not to watch: I don’t know that it will ever make sense.