Columbus Has Red on Him 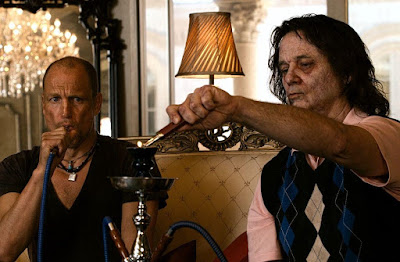 As mentioned recently, I collected a bunch of movies to watch during the stay-at-home order. It was more than 50 movies from my collection and from libraries. I’m nearing the end of that initial stack of movies and realized that there were two that would make a great double feature: Zombieland and Shaun of the Dead. I mean, how often do you get to watch two genuinely classic zombie comedies together? Other than every day, I suppose—I do own them both. Anyway, it seemed like a great opportunity for a double, and I hadn’t done one of those in quite some time.

Zombieland in many ways is the American answer to Shaun of the Dead in that it’s clearly a zombie movie and clearly a comedy. The two are otherwise vastly different; Zombieland is an entirely American movie in every aspect of it. The character archetypes are fully American, the storyline, the goals of these characters, all of them scream that this was a film meant to very much be America’s response to the British film.

We’re not going to get character names here (until the very end). More or less at the insistence of one of these characters, we’re going to be referring to everyone by the names of cities. In the case of two of them, these are the cities they come from. But that’s neither here nor there. We start a month or two into the zombie apocalypse with our main character, who will be dubbed Columbus (Jesse Eisenberg). Columbus is kind of an odd survivor aside from the fact that he has a lot of phobias and nervous habits. He has survived by making a series of rules to live by and sticking to them religiously.

We get a little bit of backstory, sort of how he started surviving in the zombie world, which included killing his next door neighbor (Amber Heard) once she turned. He’s given his name by Tallahassee (Woody Harrelson), because that is where he comes from and where he is heading. The two spend a few days together travelling east when they encounter a pair of sisters, Wichita (Emma Stone) and Little Rock (Abigail Breslin), who will become their foils, at least for a time. Wichita and Little Rock manage to scam the two men not once, but twice, but eventually, they four reach a sort of uncomfortable truce.

Wichita and Little Rock are headed west to the coast because of a rumor that an amusement park called Pacific Playland is zombie-free. Columbus, learning that his hometown (and thus probably his parents) has essentially been destroyed, decides to follow along with them. Having nowhere else to go, Tallahassee goes, too. Eventually, they wind up in Hollywood where they meet Bill Murray playing himself. Eventually, the sisters head off, and Columbus needs to figure out what he’s going to do.

There isn’t a tremendous amount of plot in Zombieland, and that doesn’t really matter. Aside from the fact that it takes place in the zombie apocalypse, Zombieland is about Columbus and his desire to find a place for himself in the world, and to find a family. I’m going to dip into spoiler territory here for just a moment—and if you’re reading this blog, this won’t be a spoiler for you. This is one of those very rare horror movies where the main cast escapes more or less unscathed. Sure, there are deaths here, but our main quartet makes it to the closing credits in one piece.

What Zombieland does very well is, in presenting us with character archetypes—the nervous dweeb, the overconfident survivalist, the pair of con artists—is give those archetypes real character. These are more than just bare bones, but come across as real people. They have backstories and history and more than simply quirks.

All of this is great, but ends up being meaningless if the movie isn’t any good. Fortunately, Zombieland is as good as they come when it comes to a horror comedy. The comedy moments here are real and are genuinely funny, and there a few very good scares. For a zombie movie, there’s also surprisingly little gore. This is the way horror comedies should be done. It manages to do what very few films in this genre can do. There are some good scares that work, and some genuine laugh-out-loud comedy. It’s close to a template for how this should be done. 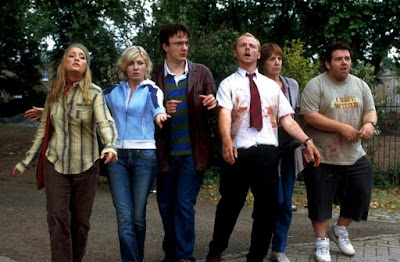 But let’s be honest, here: the true champion of the horror comedy for the current century is Shaun of the Dead. There have been a few contenders (the aforementioned Zombieland, Slither, What We Do in the Shadows, and The Cabin in the Woods come to mind), but Shaun of the Dead reigns supreme. Much of this comes from the tremendous script, and much comes from the pitch-perfect direction of Edgar Wright. Shaun of the Dead is about as close as we might come to perfecting the horror-comedy subgenre.

Shaun (Simon Pegg) is a typical late-20s loser, living with his bigger loser friend Ed (Nick Frost) and the disagreeable Pete (Peter Serafinowicz). Shaun is having trouble with his girlfriend Liz (Kate Ashfield), who wants more to her life than drinks at The Winchester, the local pub, every night. Liz’s friend Diane (Lucy Davis) and her boyfriend David (Dylan Moran) urge Liz to move on from Shaun, something she does when Shaun once again fails to do anything remotely like changing his dead-end life.

The joke, of course, is that all of this happens to Shaun at the beginning of the zombie apocalypse. After a night of drinking, he and Ed manage to get home safely and blissfully unaware of the fact that the dead have come back to life around London. In fact, the next morning, Shaun goes out on a short errand is remains unaware that there are zombies around him everywhere. He is brought to a realization when one walks into their house, and suddenly he and Ed decide to come up with a plan to survive the day. That plan is to take Pete’s car (Pete having been bitten the previous night), rescue Shaun’s mom Barbara (Penelope Wilton), kill her husband Phil (Bill Nighy) who has also been bitten, rescue Liz, and then head back to the Winchester until it all blows over.

The genius of Shaun of the Dead is that everything that Shaun and Ed plan is what happens through the course of the movie, but none of it goes according to plan. In fact, we’re given clues throughout the movie of exactly what is going to happen. The night the zombie apocalypse begins, Ed suggests a day of drinking to Shaun, and everything that Ed suggests is what transpires the following day, just not in the way that either of them expect.

While I think this might be worthy of the title of the premier horror comedy, and certainly the best one of the last 20 years, Shaun of the Dead actually doesn’t go in for a great deal of horror. There are some great gore moments, but nothing here that is particular scary until the very end of the film when the zombie swarm gets very large. It’s a film that instead trades on comedy, and trades on it very well.

That’s the thing: Shaun of the Dead is really, really funny. It’s funny in general, but since it’s a movie that is also a loving parody of the zombie genre, it’s funnier the more you know of classic zombie films. There are a couple of moments that mean nothing to someone who doesn’t know a film like Night of the Living Dead are screamingly funny to anyone who does know the genre.

Could Shaun of the Dead be a better film? Perhaps, in the sense that it could go for a few real scares over the course of the film. At the same time, that might change the pacing of the film or alter the wonderful chemistry of the cast, the genius of the script, and the brilliance of Edgar Wright’s direction.

I do want to mention Wright for just a minute here. Wright is a favorite of genre fans—he hasn’t directed a huge number of feature-length films, but most of them have gotten a good deal of acclaim. Even the one I genuinely didn’t like--Scott Pilgrim vs. the World--contained a number of Wright’s signature elements. His direction is the best part of the film. There are so many moments cleverly done—Shaun flipping through television channels in a way that lays out the zombie attacks without him realizing it, for instance—that move plot or provide exposition cleverly and in unexpected ways.

I’m guessing anyone who reads this blog has seen Shaun of the Dead. If you haven’t, rent it today; it’s worth the couple of bucks.

As a last little bit of trivia, it’s worth noting that both of these films are feature-length debuts for both directors.

Why to watch Zombieland: The most American version of a zombie film possible.
Why not to watch: It’s good enough that it could stand to be longer.

Why to watch Shaun of the Dead: It is the best horror comedy of a generation.
Why not to watch: No good reason—it’s that good.