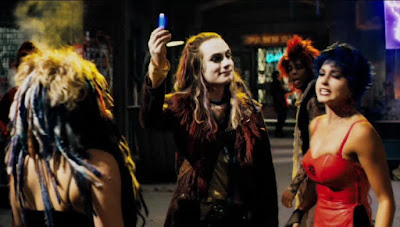 I genuinely hate Repo!: The Genetic Opera. “Hate” is not a word that I toss around lightly on this website, but it fits for this film. I’m prepared to take whatever flak is going to come my way for taking this stance.

This was actually the third time I’d watched Repo!. Back in my podcasting days, my partner Nick Jobe picked this movie for a particular episode. I honestly don’t remember the theme of that episode, but I remember that this was Nick’s choice. And, Nick told me, I should watch it twice, because it’s better on the rewatch. I’m not going to say that Nick lied; I am going to say that he and I have a different opinion of this being better on the rewatch.

It’s also a case where that first viewing was either so noteworthy or so traumatic that I remember some of the details of it. It was definitely winter, because there was a severe snowstorm, and I had to get a hotel room near my campus because there was no way I was going to drive the 40 miles home on black ice. So I watched this damned thing in a hotel room. It was a thoroughly miserable night.

So let’s talk about the basics here. About halfway through this current century, there is a plague of organ failures. A company called GeneCo provides artificial organs and transplants, and creates payment plans for those who can’t afford them. Anyone who can’t keep up with payments has those organs forcibly removed by Repo Men, who more or less have a legal right to assassinate anyone in their attempt to reclaim GeneCo property.

GeneCo is run by Rottissimo Largo (Paul Sorvino), who goes by “Rotti.” He might as well be named Evil McBadguy, but no matter. None of his children seem prepared to take over the company, which is a problem, since Rotti has just been diagnosed with a fatal illness. It’s worth noting here that evidently murder is no longer a crime in 2056, because when he gets the news that he’s dying, one of his bodyguards pulls out a pistol and shoots the doctor. Rotti’s eldest child, Luigi (Bill Moseley) murders a number of people in the course of the film and screams a lot. Pavi (Kevin Ogilvie of Skinny Puppy fame) frequently has surgery to replace his face, which is now essentially a mask. Daughter Amber Sweet (Paris Hilton for some reason) has changed her name to try to make it as a singer. Also, she’s addicted to surgery and a drug called Zydrate that is a painkiller and that can be synthesized from dead bodies. Getting this so far?

Our narrator is a man known as GraveRobber (Terrance Zdunich, who also co-wrote the original musical), a man of the pastiest of complexions who survives and pays off his organ transplants by collecting Zydrate from the dead. He has a chance meeting with Shilo (Alexa PenaVega), a sickly teen kept in her room by her doctor father because she is easily infected. However, she likes to sneak out to her mother’s mausoleum, which is evidently connected by a tunnel to her house. Or something.

Anyway, time to soap opera this shit outta this thing. Shilo’s dad (Anthony Head) is actually the head repo man. This is because he is being blackmailed by Rotti Largo, who was originally engaged to Shilo’s mother. When she dumped him and then became ill, Largo slipped poison into her medication and then blamed her husband, forcing him to work as a repo man. He also kept the life Shilo a secret, even from Blind Mag (Sarah Brightman), forced to work as GeneCo’s spokesperson because of a bad contract. Mag happens to also have been Shilo’s mother’s best friend. Following this? Got all of the incestuous pathways down? Good!

The lone bright spot for me is the song Zydrate Anatomy, which is catchy and fun. Oh, wait—at one point Paris Hilton is singing on stage and her face falls off. That’s pretty great, too.

Nothing else here makes any sense. In one of the opening scenes, as GraveRobber meets Shilo, he is expositioning about what he does, and he starts screaming about how he robs GRAAAAAAAAAAVES! Meanwhile, there are guys with flashlights and guns searching for him about 10 feet away, and they can’t seem to find him. Pavi Largo, for some reason, sounds like every other sentence out of his mouth is going to be “It’sa me! Mario!” while neither of his siblings nor his father sounds anything other than bland American. Murder legitimately seems to be legal. Luigi Largo kills people more frequently and with less thought than Baron Harkonnen. And this is just the tip of the iceberg.

If Shilo’s dad hates being a repo man, why does he evidently like it so much? Blind Mag tells everyone that her last concert is coming up, knowing that it will mean that a repo man is going to be sent to remove her eyes and probably kill her. So why announce that? If Shilo is so desperately sick, why does she never actually get sick all of the times she sneaks out of her house? What kind of economy could possibly be based on organ transplants? I get, visually, why everyone is in bondage gear, but why is everyone in bondage gear?

None of this gets to the absolute horror of Paul Sorvino singing.

I hate this film. I hate it so much, and now that I’ve watched it three times, I’m never going to watch it again.

It’s worth noting that there was some concern that there as a copyright infringement case here between Repo!: The Genetic Opera and Repo Men from a couple of years later. Repo Men does have some real similarities to Repo!, and was based on a book that was published after Repo! was released. However, it was based on a short story written years before, so if anything, Repo! might be the plagiarism.

Why to watch Repo!: The Genetic Opera: “Zydrate Anatomy” is almost worth the entire film.
Why not to watch: It makes as much sense as a flavored suppository