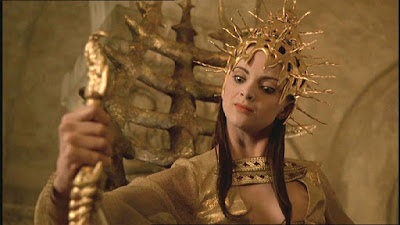 For anyone who has read any H.P. Lovecraft, there’s an intense desire to see his work appear on the big screen. Part of this is because of Lovecraft’s weird descriptions of things never really fully describes things. He used words like “non-Euclidian” without really providing a solid idea of what that should mean to the reader. Lovecraft also loved indescribable horrors from beyond space and time. These days, it’s easy to take these stories at a kind of face value rather than attributing his rampant, severe racism to why there were indescribably horrific alien “things” in the world and instead deal with the critters and monsters and lost drowned gods he actually created. Lovecraft’s work should be easy and welcome fodder for horror filmmakers, and yet films like Dagon seem to come mainly from Stuart Gordon.

Dagon is clearly adapted from the canon of Lovecraft if you know even a little bit about the man’s oeuvre. Specifically, this is an adaptation of the stories “Dagon” and “The Shadow over Innsmouth,” with the biggest change being that it takes place on the coast of Spain rather than the east coast of the United States. It’s also potentially the wettest film I have ever seen, and that includes movies that take place underwater.

Paul Marsh (Ezra Godden), an entrepreneur of some stripe, has a dream where he meets a shark-toothed mermaid. He’s actually sailing off the coast of Spain with his girlfriend Barbara (Raquel Meroño) and friends Vicki (Birgit Bofarull) and Howard (Brendan Price). A sudden squall knocks the boat against some rocks. Vicki is trapped below decks. Howard stays with her while Paul and Barbara take the small inflatable raft to the nearby town.

Things are immediately…upsetting. Everyone in the town is physically strange in many ways. They have odd-colored flesh, strange bulbous eyes, webbed appendages, or other bizarre physical traits. Barbara is taken to the local hotel while Paul is taken back out to rescue Vicki and Howard, only to find that both are missing. Barbara is missing by the time he gets back to town as well. He’s given a room in the hotel only to discover it is filthy, leaking from the ceiling, and in terrible disarray. He also manages to attract the attention of the locals, who shamble toward him not unlike zombies.

Eventually, Paul meets Ezequiel (Francisco Rabal), who is evidently the last human in the town of Imboca. While the language barrier is a difficulty, eventually Paul is led to understand that years before, the people of Imboca were led away from Christianity from desperation caused by a lack of fish nearby and extreme poverty. The people then begin worshipping Dagon and suddenly the sea is filled with fish and gold. Of course, Dagon exacts a price as well—in this case, the people become more and more mutated and fish-like.

Eventually, Paul meets up with his mermaid (Macarena Gomez) who is a sort of high priestess of the cult, and also something actually close to a mermaid—her lower limbs are more tentacle/eel-like than fishtail. But is Barbara still alive? Is Vicki? And what do the fish people really want from these outsiders?

There are a lot of interesting choices made in Dagon. If you pressed me on why Ezra Godden was given the lead role in this, I would reply that his passing resemblance to Jeffrey Combs at his Re-Animator had to be at least in his favor. They don’t quite look like brothers, but they do look like they could be cousins. This would be par for the course for Stuart Gordon and screenwriter Dennis Paoli, who almost certainly named the Barbara character after one of their muses, Barbara Crampton.

Godden makes some choices here that work better than you might expect. A lot of what he does is influenced by silent film comedies. It’s not funny, and I don’t think it’s necessarily supposed to be that funny. His Paul Marsh is clumsy, though. He frequently loses his glasses (which were evidently an homage to Harold Lloyd), drops things, and fumbles with things. Again, it’s not particularly funny, but it does add an interesting quality to the character.

Dagon is a vicious film, though. It’s mean in a lot of places, and there is gore that shows up specifically because we are dealing with a Stuart Gordon film. It’s a film where not much good happens to anybody in the film. In fact, once things start, we don’t really get a lot of reprieves from a sort of constant and building horror. It’s impressive, though, in the sense that the gross-out stuff is here, but isn’t the focus of the film. There’s a real effort to create the idea of something terrible happening that has built to being out of control and unstoppable, much like Lovecraft’s old gods.

Additionally, most of the effects appear to be practical. There are a couple of moments of what look like an attempt CGI or at least some sort of digital manipulation of the film. These moments are, flatly terrible and even embarrassing. It’s a shame, because a lot of the rest of the film really works.

It’s hard to recommend Dagon because it is so bleak, but it serves as a reminder that until Guillermo del Toro manages to get a Lovecraft movie greenlit, Stuart Gordon reigns as the king of adapting Lovecraft’s particular brand of non-Euclidean insanity on the big screen.

Why to watch Dagon: Not enough Lovecraft gets adapted to film.
Why not to watch: Some of the worst, most unnecessary CGI you’ll ever encounter.