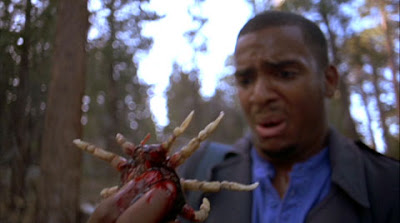 When I tell you that I watched a horror movie from 1993 called Ticks, you almost certainly have a number of initial thoughts and expectations. I’m here to tell you that many of those are exactly right while others are much more in the “pleasant surprise” category. It would not be at all a stretch to suggest that Ticks is clearly a spin on the much more successful Arachnophobia from several years earlier. In fact, in a lot of ways this wants to be a more urban, street-smart version with a different arachnid.

What Ticks has going for it is a very entertaining cast that includes Peter Scolari, Clint Howard, Ami Dolenz, Alfonso Ribeiro, and Seth Green. Interestingly, it also features Virginya Keehne, who has exactly three films listed on her Letterboxd page. Why is this interesting? Because one of them is The Dentist, which I watched yesterday, making this weekend a sort of unofficial mini Virginya Keehne filmfest. (Additionally, I do wonder if, in the post-coital milky afterglow, her partner once leaned in closely and whispered “Virgin-Nah!” in her ear.)

Anyway, we’re going to start with a pot grower named Jarvis (Clint Howard) who is spiking his weed plants with steroids for a more bountiful harvest. The runoff from his grow operation has mutated the local tick population, though, causing them to become roughly the size of a sandwich, fast, and blood-thirsty. Meanwhile, in the local unnamed metropolis, Tyler (Seth Green) is pushed into a wilderness adventure weekend for urban youth. Run by Holly (Rosalind Allen) and Charles (Peter Scolari), the trip includes Charles’s reluctant daughter Melissa (Virginya Keehne), “Panic” (Alfonso Ribeiro), quiet girl Kelly (Sina Dayrit), and couple Dee Dee (Ami Dolenz) and Rome (Ray Oriel). Off they go to the woods, none the wiser of the arachnid plague about to start.

We’ll get a few close calls, an unexplained attack or two, and the almost unconscionable death of Panic’s dog Brutus from a tick attack before things really start going. Rome and Dee Dee run off into the woods only to find Jarvis’s grow operation, and just in time to watch him die from a tick infestation. Clint Howard screaming “I’m infected!” remains one of the true highlights of the film.

Anyway, we’re also going to involve another marijuana growing operation, this time run by Jerry (Michael Medeiros) and Sir (Barry Lynch) who manage to start a forest fire and ultimately unleash the tick horde on our urban campers. Many exploding ticks, people having ticks dig ito their bodies, and gooey squelching commences. Ticks is liberal with its use of squishy insect bits and with people having to yank the arachnids out of their body parts.

Before we get into what really works here—and truly, a lot of it does—I do need to discuss the critters themselves. The ticks are actually pretty good creations. They’re clearly not actual living things, but they skitter around and scuttle across surfaces, and they work really well. However, I can tell you from experience that ticks are almost impossible to squash—they’re like watermelon seeds and about as difficult to crush. The larger ticks in this movie get squicky if someone so much as looks at them funny. Additionally, these ticks aren’t just affected by fire, they explode from it, which is rather unlike a real tick. I’m certain this was just so they had an excuse to have a lot more splattery bits on the screen.

Ticks is also painfully unhip. It desperately wants to be cool and edgy in some ways. That seems to be the function of Panic as a character—to provide some sort of urban credibility to the proceedings. The problem is that he is instantly recognizable as Carlton from “The Fresh Prince of Bel Air,” and so it immediately kills any street cred he might have had. It is entertaining to see him try to act gangsta, though.

But here’s the thing--Ticks isn’t all that bad. I mean, it plays about 7-10 years older than it actually is. It feels straight out of the mid to late ‘80s rather than the mid-‘90s. But it’s a watchable creature feature. It’s not going to match something like Tremors or Slither or even the aforementioned Arachnophobia, but it sticks to its intent, doesn’t veer from the basic idea of giant ticks, provides some decent gore moments, and ends without wearing out its welcome. One of the better moments is when a gigantic tick crawls its way out of the dead body of one of the victims.

So, Ticks is not a great movie, and it probably isn’t even really a good movie. What it is, though, is an entertaining one, and one that is not entirely too dumb to enjoy. I did enjoy watching it despite all of the ten-years-too-old cringe factor, but the story is fun and the creature effects are surprisingly effective.