Let Your Fingers Do the Walking 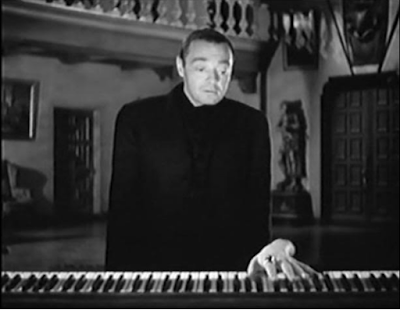 There’s something I love about early horror movies. They’re earnest in a way that a lot of modern horror isn’t. A lot of this seems to be because they had to work a lot harder to do what they wanted. They couldn’t show a great deal of gore, they couldn’t include language, and so they had to go for atmosphere and suggestion. I don’t want to discount modern horror, because there’s some great horror movies out there that have learned a lot of lessons from these earlier horror films as well as the modern ones. A film like The Beast with Five Finger might not work today because of how it works, but it’s a perfect testament to the way horror had to be done 70-80 years ago.

There’s a great deal of films like The Hands of Orlac in The Beast with Five Fingers, because the beast isn’t a man, but a disembodied hand. We’re going to start with a sort of conman named Bruce Conrad (Robert Alda), who is scamming tourists in Italy. It turns out that Bruce is actually a formerly respected composer whose last work was creating new pieces for Francis Ingram (Victor Francen), a respected pianist who suffered a stroke that paralyzed his right side. Also living with Ingram are his nurse Julie Holden (Andrea King) and a musicologist/astrologer Hillary Cummins (Peter Lorre). Ingram, under the auspices of his attorney Duprex (David Hoffman), has everyone declare him sane, mainly so that when he dies, his new will won’t be contested.

What happens next is all the set up. Turns out everyone is in love with Julie. Ingram is, and has changed his will so that she gets everything. Bruce is, too, and confesses his love for her, which is returned. Since Bruce feels that he can only drag her down, he wants her to go away, something she planned on doing anyway. Hillary needs her to stay so that he can finish some astrological research. He tells Ingram about the tryst of Julie and Bruce in the garden, and Ingram goes crazy, attempting to strangle Hillary. Naturally, Ingram isn’t going to live through the night—hallucinating, he falls down the staircase and breaks his neck.

Naturally, we’re going to get all sorts of will reading drama, especially because the previous heir, Donald Arlington (John Alvin) and his father Raymond (Charles Dingle), who are planning to contest the will. This gets more complicated when Duprex turns up dead and the crypt of Francis Ingram has been broken into and his left hand removed. Soon enough, Hillary starts seeing the hand, as do others.

That’s the set up. We’re going to have sightings of the hand, including one spectacular moment where Ingram’s safe is opened to find the original version of the will only to have the hand sitting on top of it.

What The Beast with Five Fingers does really well is create that atmosphere of something spooky and spectral going on. We get piano playing in the middle of the night that we’re told by the other characters is absolutely the playing of Francis Ingram. We get glimpses of the hand, and disturbing moments like Ingram’s ring (with which he was entombed) appearing on the piano. It’s great stuff.

The problem, though, is one that had to be foreseen by the people who made this movie. I’m going to put this under a mild spoiler warning. If you really don’t know movies of this era, this will be a spoiler. If you are familiar with the actors of this era, you knew what I am about to say based on the cast list.

Did you really think for a moment that someone other than a character played by Peter Lorre was going to be the bad guy? Typecasting is such a bitch.

Why to watch The Beast with Five Fingers: It’s the right level of insane.
Why not to watch: Typecasting spoils the surprise.