One Imagines the Horse Was Pale

Film: The Devil Rides Out
Format: Internet video on the new internet machine. 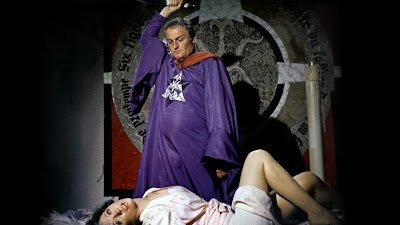 I have a particular fondness for the Hammer horror films of the 1950s and 1960s. I love that they brought back the idea of Gothic old-school horror. The Dracula and Mummy films are great fun. But I also like it when they go off script with a film like The Devil Rides Out, which is not based on a classic monster mythology, but is based on a Dennis Wheatley novel and adapted by Richard Matheson. We’re not going to get vampires or walking dead bodies here, but, as the title suggests, we are going to get demonic possession and rituals. We’re also going to get Christopher Lee playing a good guy, and that’s always a load of fun.

We are introduce to Nicholas, Duc de Richleau (Lee) and his friend Rex Van Ryn (Leon Greene), who are going to visit their friend Simon Aron (Patrick Mower). What they discover is that Simon has moved away from their company because he has fallen in with a satanic coven and is preparing to be rebaptized into the cult, damning his soul for all eternity. To save him, de Richleau and Rex will have to move quickly, because the ritual will occur in a day or two on one of the high unholy days of the church. Also tossed into the mix is Tanith (Nike Arrighi), also set to be inducted into the cult, and with whom Rex has an immediate connection.

What follows are narrow escapes and psychic presences, magical projections, and demonic appearances. Many of these come at the behest of Mocata (Charles Gray)

, the high priest of the cult. Adding spice to all of this is the fact that Mocata has a psychic connection with both Simon and Tanith, and is able to more or less control them from a distance at times. Naturally, he wants nothing more than to induct them into the cult immediately, with only Rex and de Richleau standing in his way. Well, them and the Eatons; Marie (Sarah Lawson), Richard (Paul Eddington), and daughter Peggy (Rosalyn Landor), who live in the area and whose massive house becomes both a base of operations and a sanctuary.

There are certainly some horror elements to this film. We get the appearance of a giant spider at one point, as well as a visitation from the Angel of Death, which, even with the parts of the sequence that involve running the footage backward and forward, is pretty great. But, that said, The Devil Rides Out is far more an adventure film than a true horror film. There’s a rescue scene, for example, that is straight out of old-school film serials, especially because it involves a lot of cultists running in all directions rather than at the people breaking up their ritual.

One of the main selling points of the film is the presence of Charles Gray as Mocata. Gray’s presence is surprisingly malicious for such an odd little film. He’s filled this character with a great deal of menace, and he actually does seem like a real threat for a good deal of the film. Even the fact that Christopher Lee is the real presence here and the real focus of the film, it would be far less than it is without Gray here to act as his foil.

I honestly don’t have a great deal more to say about The Devil Rides Out than I already have. It’s a really entertaining film that surprisingly feels like it has actual stakes throughout. The characters are fun and engaging, the bad guys are a lot of fun, and we get some great appearances of demons and spirits. While not all of this holds up after 50+ years in terms of the effects and for modern audiences a lot of this will look pretty stiff and silly, the story itself really does hold up well and is a lot of fun.

This is not modern horror in the least, and The Devil Rides Out would only really be scary for a very young audience. It’s carnival funhouse scary, rollercoaster scary. If you like this era of horror, this is absolutely right in the wheelhouse and I can’t imagine you not loving it. Even for those with just a passing interest in the genre, there’s a lot here to like. In fact, the only thing I really object to is just how much it ends up relying on Christianity specifically to work. One of these days, some non-believers really need to fight the powers of darkness in a film.

Why to watch The Devil Rides Out: Christopher Lee plays a good-guy occult expert.
Why not to watch: As usual, it ultimately proselytizes.

Posted by SJHoneywell at 3:05 PM

Email ThisBlogThis!Share to TwitterShare to FacebookShare to Pinterest
Labels: horror, Terence Fisher, The Devil Rides Out