Films: Spiral: From the Book of Saw
Format: DVD from Sycamore Public Library on The New Portable. 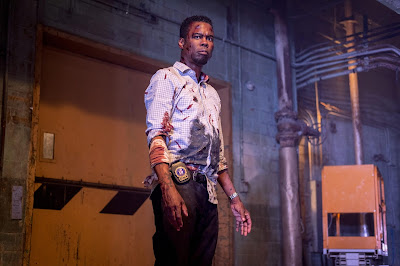 I liked the first Saw movie, I found the second one passable, and I disliked the third one. I didn’t bother with the rest of them. So why the hell did I bother with Spiral, you may ask. That’s a fair question. I saw the DVD on the new acquisitions shelf of a local library, saw that it starred Chris Rock and Samuel L. Jackson, and didn’t notice until I got home that it was also called Saw: From the Book of Saw. Well, in for a penny, in for a pound, so here we go.

Spiral is going to be a movie of two halves, or rather two sides. There are things here that I like and things that I do not. I’m not entirely sure where this leaves me on the movie in general; I’m still working that out, and perhaps by the time I get to the end, I’ll have an answer as far as that goes. Bluntly, there are plot elements here that work really well. What doesn’t work as well is the reliance on gore. The Saw movies have always been at least a little bloody, but this one dives in to that end of the pool with gusto and without real necessity.

What this iteration of the Jigsaw killer is going to give us is a new variation on Jigsaw’s old mission. Instead of finding people who are missing that piece of the puzzle, this copycat is targeting cops who have, in one way or another, betrayed their oath. A cop who frequently lied under oath, for instance, is forced to either rip out his own tongue or die. Another, who pulled the trigger on an innocent man, needs to choose between losing his fingers or his life. And so it goes.

At the center of this is Detective Zeke Banks (Chris Rock). Zeke, we are told, is the equivalent of what passes for a good an honest cop. His backstory is that years before, his partner (Patrick McManus) killed a witness and Zeke turned him in. It got him a commendation, but because of that “Thin Blue Line” bullshit, this makes him a pariah in the department. He’s worked on his own, often going undercover without clearance until he is finally told that he needs to become a team player again. That’s going to happen by giving him a partner, an up-and-coming detective named William Schenk (Max Minghella).

Zeke and William catch the case of what appears to be a hobo hit by a subway train. Of course, it isn’t that—it’s a cop (the tongue guy mentioned above), and we’re immediately down the rabbit hole with more gory murders coming. No one appears to be safe and there are a lot of potential targets. In addition to Zeke and William themselves, other likely candidates include Zeke’s ex-father cop Marcus (Samuel L. Jackson), the precinct captain (Marison Nichols), and just about everyone else with a connection to the precinct.

The initial cat and mouse of this is interesting. After each copycat murder, a package shows up at the precinct for Zeke, often with a piece of the victim (although not a carved puzzle piece in this case). As we get deeper into what is happening, we get more and more graphic detail exactly how these people die. These are not pleasant or nice deaths, and we’re going to get all of the detail when these deaths occur.

And that really is my objection to Spiral: From the Book of Spiral. I don’t object to gore (I tend not to seek it out, either), but I want it to have a point. If the gore tells us something or gives us sone insight or something else, it can be a very useful tool in the filmmaker’s arsenal. Here, it’s gore for the sake of gore, and that’s always going to be a little disappointing. To be fair the Saw movies often did tend to get nasty, but these are extreme.

And that’s a problem, too. The Saw franchise frequently went with the nasty and painful, but the “traps” in this movie are extreme. These aren’t “cut off your foot or die” but “make yourself permanently paralyzed or die” or “cut off all of your fingers and thumbs or die.” It has lost all of the balance that existed in the first movie and, to some extent, the second one.

There are some interesting ideas here, but ultimately, I think I’m going to go back to being done with the Saw franchise.

Why to watch Spiral: From the Book of Saw: It’s an honest attempt to reboot the Saw franchise.
Why not to watch: It’s really just another Saw movie.

Email ThisBlogThis!Share to TwitterShare to FacebookShare to Pinterest
Labels: Darren Lynn Bousman, horror, Spiral, Spiral: From the Book of Saw