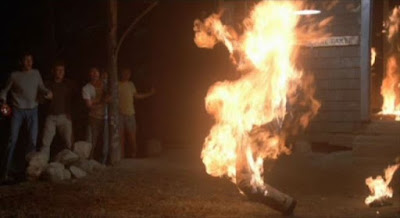 In the massive career of disgraced movie producer Harvey Weinstein, there had to be a beginning point. Well, here it is: The Burning, a 1981 slasher based loosely on the legend of the Cropsey legend from upstate New York. And yes, according to the Wikipedia page on this movie, Weinstein’s sexually harassing ways were in full force even at this early point in his career. Can’t keep a pervert down, I suppose.

Anyway, The Burning is very much a slasher in the vein of Friday the 13th. It’s worth noting that for all of the similarities—and there are a lot of them—this project was started before Friday the 13th became a thing. The parallels are surprising, though. We start in the past, where a collection of teens at a summer camp attempt to pull a prank on Cropsy (Lou David), the camp caretaker. Things go wrong and Cropsy is lit on fire. He survives his horrible injuries, and years later is released from the hospital. Naturally, he’s going to go on a killing spree. I don’t even know why I have to tell you this.

Cropsy is going to mete out the same punishment that we expect from our slasher monsters, although he is going to be a lot less discerning in his victims. Sure, people having sex will get killed, but he’s going to more or less try to kill anyone in his path. Unlike Mrs. Voorhees, though, Cropsy isn’t going to return to the site of his attack and disfigurement. No, he’s going to go to a different camp and start weeding through them.

What makes The Burning interesting is both the commonality with what has become the slasher genre and the clear differences. This is from a time when the genre wasn’t entirely set. Sure, there were some tropes beginning, but you could still get away with some real differences from the standard. For instance, Cropsy is going to rack up a pretty good body count, but a lot of people are going to survive this. There’s also the significant difference of us having a final boy instead of a final girl. That boy, Alfred (Brian Backer) is going to have a lot of final girl qualities in him, but the gender swap here is interesting.

But this is standard in a lot of ways. We’ll get a couple of jump scares and we’ll get some attacks that eventually lead us to the end of the movie. There is one sequence that is really worth noting—a group of the campers finds a missing canoe, and when they approach it, Cropsy jumps out and kills all of them with his weapon of choice—a pair of giant garden shears. It’s a pretty spectacular slasher moment, with some excellent effects, like one of the campers getting his fingers sliced off.

But this is otherwise very straightforward. Cropsy stalks people and either kills them with his shears or they get away without knowing he was there. Eventually, while some of the campers go for help, others have their final confrontation with him. In addition to the scene at the canoe, the big moment in the film is the reveal of Cropsy’s distorted and burned face, and while it doesn’t quite hold up if you pause the film, in the moment, it’s pretty great.

There is a fun reason to watch The Burning, or a couple of fun reasons. This is the first movie of Fisher Stevens, Jason Alexander, and Holly Hunter. In other words, this oddball slasher movie has in its cast two Oscar winners (Stevens won for Best Documentary Feature for The Cove) and someone with both a Grammy and a Tony. If we could scrounge up an Emmy for someone in the cast, The Burning would have an EGOT.

Look, this is not a great movie. It’s not really even that good of a movie. It’s cruel in the way that a lot of slashers are. A lot of people who don’t really deserve to get killed do so simply because the movie wants them killed. It doesn’t have the sort of retributive feel that a typical slasher has. There’s no sense of justice here, no sense that there’s something deserved in what happens. Instead, it’s just a guy with a gardening tool.

Hard to argue with what happened to the cast, though!

Why to watch The Burning: It’s formative for the slasher subgenre.
Why not to watch: You can still sense the stink of Harvey Weinstein on it.