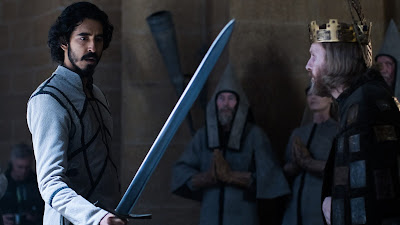 I knew from the moment that the reviews started coming in that I would be watching The Green Knight eventually. On the surface, this is the definition of an Oscar film. The Green Knight has 89% approval on Rotten Tomatoes from critics and a mere 50% from audiences. It’s artsy, based on a classic story, and has a solid cast. This blog looks at seven different Oscar categories. I could see this nominated in four of them at the upcoming Oscars—Picture, Director, Actor, and Adapted Screenplay. I have no idea if it will be a contender, but I think it should be.

The Green Knight is a fairly straightforward version of the Arthurian legend of Sir Gawain and the Green Knight. Rather than spoil what the story is, I’m going to give the basics of the legend, since the film does a good job of sticking to the broad strokes of the story. At Christmas, Arthur and his knights are visited by The Green Knight, who offers a unique challenge. He puts it to the knights that he will suffer a blow from any one of them, if they agree to track him down and find him in a year (in the story, it was on New Year’s Day) and receive the same blow in return.

With no other takers, Gawain steps up and cuts the Green Knight’s head off, which would seem to mean that he’s off the hook for the next year. However, the Green Knight stands up, picks up his head, and walks out. So what does this mean for Gawain? His choice is to find the Green Knight in a year and, with his honor on the line, allow the Green Knight to decapitate him or forego all honor and bring shame and disgrace to himself…but live.

It is a great set-up for a story, and there’s a reason it’s one of the better known and better beloved of the Arthurian tales. It brings together everything that we expect in a tale of the Knights of the Round Table. We have the honor and valor of a knight in question. There is the quest that will almost surely end in death, but if it does not, it will end in triumph and redemption. There is magic and mystery weaved into the story, as well as intrigue, romance (eventually), and more. Toss in the fact that it’s a period piece, and you have a movie that has a lot going for it.

While the acting work across the board here is very good, there are three roles I want to talk about. The first is Alicia Vikander, who plays several roles. She is initial Gawain’s love interest Essel, but is more noteworthy as the Lady who tempts Gawain in the last days of his quest. The second is Barry Keoghan, who plays a scavenger that Gawain comes across near the start of his journey. I don’t generally like Keoghan, who looks to me like Paul Dano if he were made out of Play-Doh. I don’t mind him here, but my thought when I see his doughy mug is to wonder why someone else wouldn’t have been better. However, since he always looks a little plague-y, he fits in a Medieval-themed movie.

But it’s Dev Patel as Gawain who is at the center of this movie, and who should be at the center of this movie. Patel is perfectly cast here, someone who both looks the part and can act the part. I like Patel in general, and this is the best he’s been. He brings a very particular type of gravitas to the screen, one that is hard to describe and duplicate. He gives the impression of something roiling just under the surface in him all the time, of having a depth that he is desperate to tap but doesn’t yet know how. That’s perfect for this version of Gawain, who is not yet a knight, but who is the nephew of Arthur, a man seemingly destined for greatness, but not yet started on that journey. It also fits with the many different versions of Gawain in the legend. Is he the brave knight who faces the Green Knight? Or is he the secular, sin-filled knight who helps bring about the destruction of the Round Table? Is he both? Patel gives us every indication that his Gawain could be either extreme.

The overall design of this film is beautiful, and it’s here that we’re likely to see more Oscar nominations. The Green Knight looks suitably like the age that it is supposed to depict. It is primal and old, filled with ancient places containing even more ancient secrets. The design of the Green Knight himself is worthy of sitting next to any of Guillermo del Toro’s creations and proudly declare himself their equal. Start to finish, this is a gorgeous film. Even the parts that are deviations from the legend (like the psychedelic mushroom-inspired giants) are beautiful to look at. Nothing here feels out of place. This is a lived-in world, one that feels very much like it has a concrete existence. There’s not a frame of this that looks or feels staged. The music fits equally well, and enhances the story and the watching without becoming oppressive.

Is there a complaint? I have really just one. We are frequently treated to intertitles that tell us essentially what chapter of the story we are on. I could have lived without these. I thought they didn’t add anything to the story or the narration, and they pulled me out of the reality of the movie world, which I did not appreciate.

Look, The Green Knight isn’t for everyone, but it is for a lot of people, and they’ll be the ones who find it and promote the hell out of it.

Why to watch The Green Knight: You can expect this will be nominated for a host of Oscars.
Why not to watch: The intertitles have a tendency to pull the audience out of the fantasy.