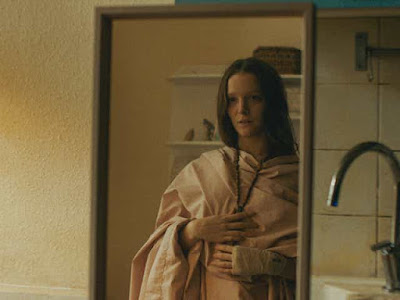 My position when it comes to religion is not a secret, although I haven’t really gone into a great deal of detail on this blog. I am a formerly religious person, believe it or not, but that’s very much in my past. These days, I’m not merely someone who is areligious, but someone who is specifically antireligious. Gun to my head, I will tell you that I think that religion either causes or exacerbates every societal ill we experience, and I can argue that if necessary, although this is not the place for it. Knowing that, Saint Maud was a film that was both difficult and also an encapsulation of exactly why I find religion to be so terrible. It’s also a reminder that “passion” in the religious sense is not necessarily indicative of pleasure, but is synonymous with agony, suffering, and pain.

Saint Maud is a film that explores in very real ways that sort of religious ecstasy, the sort of intensity of feeling where pleasure and pain can no longer be separated. We will be coming at this in the person of Maud (Morfydd Clark), formerly known as Katie. Maud is a nurse who lost a patient despite her attempting CPR. She converted to Catholicism and renamed herself Maud, and takes a job as the equivalent of a hospice nurse. She’s assigned to Amanda (Jennifer Ehle), a former dancer and choreographer who has stage four terminal cancer.

Maud is portrayed in this life as something of an innocent, someone who believes entirely in the purity of her own faith. Amanda, on the other hand, chain smokes, worries about the oblivion of the grave, and frequently pays for sex with Carol (Lily Frazer). Maud becomes increasingly concerned over the state of Amanda’s soul, and in her religious perspective, believes she has been led to the atheistic Amanda in a last-ditch effort to save her soul. For her part, despite her pain and imminent demise, Amanda finds Maud’s faith amusing at best, and is equally amused at Maud’s attempt to keep Carol away from her. Humiliated by this being declared publicly at Amanda’s birthday party, Maud slaps her and is dismissed from her job.

Oh, but we’re just starting on the trip of where this will eventually take us, and rather than spoil much of the second and all of the third act, I’m going to stop here with the narrative. We will be witness to Maud’s stumble into her old habits, her renewed faith, moments of ecstatic religious bliss, and her intense belief that she has been called to some grander purpose by her god, including what she interprets as not only direct signs from the divine, but actual conversations held with it. Naturally, this is not going to end well.

Saint Maud is psychological horror of the most disturbing style. This is an exploration not simply of belief but of the consequences of belief, and our inability in many ways to distinguish between what is fact and what we have convinced ourselves is fact. Maud as a character, initially shown to us as a naif is instead something terrifying: a person so convinced of her own beliefs and what she perceives to be true that she will stop at nothing to impose it on others, no matter the cost. Maud, in a former life, would be Joan of Arc, and would be not merely prepared for the stake, but actively looking forward to it.

One of the most significant realities of Saint Maud is how clearly it demonstrates what I see as one of the greatest dangers of religious faith: confirmation bias. Maud spends much of the film desperately looking for a sign from her god that she begins to interpret everything she sees as the sign that she wants. A circling of clouds, a rustle of wind through the trees, the arrival of an old colleague—all of these become confirmation that her god is alive in her and working in her, and that all she is doing is ultimately right because it has been given divine favor.

That kind of confidence, that complete assurance of being right in all things, is terrifying to me. To absolutely know that you are right and to feel that because of this that you have the right, nay the duty, to impose that truth on everyone else no matter the cost, and no matter the pain caused.

It doesn’t hurt that the last few minutes are, to quote my older daughter, loco bananas.

This is not a movie that is going to work for everyone, but it absolutely did for me. In a world where ideas like Christian nationalism are not merely talked about but earnestly worked toward, a film that shows the potential consequences of that kind of terrifying certainty and desire to use it to control the thoughts and lives of others is chilling.

Why to watch Saint Maud: Man, does this take a hard left turn.
Why not to watch: If you have issues with religion, this could be very triggering.