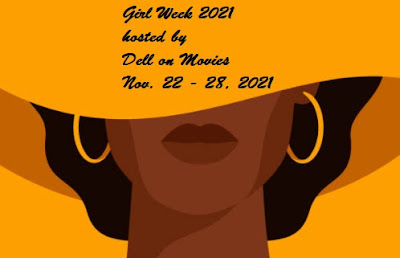 Dell over at Dell on Movies is doing his yearly Girl Week blogathon, and I've decided to participate. I'm hoping to participate several times, but I wanted to make sure I got in at least one review during the week. 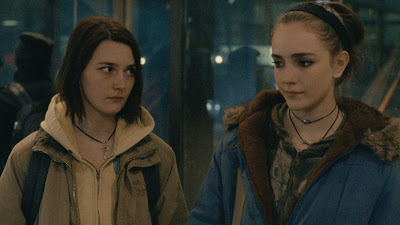 Of the new movies added to the 1001 Movies list, Never Rarely Sometimes Always was the one that I looked forward to the least. This has nothing to do with this being a “woman’s” movie, but simply that it’s a difficult subject. Any relatively regular reader of this blog is going to be roughly sure of my politics in general, so it’s not going to be surprising that I am, for instance, pro-choice when it comes to the abortion question. That said, it’s not a topic that I love talking about. For me, it’s a bodily autonomy issue and a conversation where I don’t generally belong. So, a movie that is essentially “the abortion question” in the person of one young woman is a film I feel only vaguely qualified to discuss.

But that’s what we’ve got when it comes to Never Rarely Sometimes Always. Autumn Callahan (Sidney Flanigan), in rural Pennsylvania, discovers that she is about 10 weeks pregnant. Rather than being given any real counselling, she’s shown an anti-abortion video and talked to briefly about the wonders of parenthood and of adoption. She learns that she is unable to get an abortion in Pennsylvania without parental notification or approval, and her juvenile attempts at causing a miscarriage don’t work. Her third option is to go elsewhere. Eventually, her Skylar (Talia Ryder) susses out the truth. She steals cash from the grocery store where the two of them work and they buy bus tickets to New York city so that Autumn can have an abortion.

That’s the basic plot of the movie. What happens, though, is a series of hoops for the girls to jump through. At her first appointment, Autumn finds out that she is not 10 weeks pregnant as she was told back home, but 18 weeks pregnant and into her second trimester. This means she needs to go to a different facility and needs to wait another day. At that second facility, she learns that she cannot use her parents’ insurance or they will learn of the procedure, which forces her to use the rest of the money she and Skylar have. She also learns that this procedure takes two days, meaning they will have to spend another night in New York somehow, and will need to figure out how to get back home without money for bus tickets.

The title of the film comes from an interview that Autumn sits through at her final clinic. The counsellor (Kelly Chapman) asks her a series of questions about her sexual history. Eventually, the questions she asks are less about her sexual experience and more about potential trauma or abuse she might have suffered at the hands of her partners—“Have you ever been forced to have sex when you didn’t want to;” “Has your partner ever hit or slapped you”—with the possible answers being the title of the film. What we learn from this interview is depressing and terrible and not at all shocking, which is what makes it so depressing and terrible. Autumn has never really had a relationship that wasn’t abusive on some level, and it’s what she has evidently come to expect.

Never Rarely Sometimes Always, then is a film that is about abortion on the surface, but is about so much more below that surface. For Autumn, and one presumes for Skylar and for most of the other young women in their home town, sex is not about something that they do with other people, but something that happens to them. If you want any kind of relationship, sex is a part of the package, because any guy interested will move on to someone else willing to have sex if the girls aren’t. This becomes even more evident when Autumn and Skylar are forced to resort to talking to Jasper (Theodore Pellerin), someone they met on the bus, as a way to figure out how to get home. For them, sex and anything sex-related, is transactional. If they want companionship, sex is the price. If they want anything at all, sex is the price.

This is also a movie about health and healthcare. In much of the rest of the world, Never Rarely Sometimes Always wouldn’t have a plot. Much like a show like “Breaking Bad” wouldn’t exist in a country with socialized medicine or John Q couldn’t exist in a country where healthcare was considered a right rather than a privilege, Autumn’s story wouldn’t have this trajectory without the dysfunctional American healthcare system. Oh, she might well still live in a world and a place where sex was the price of existence, but the consequences of being born into that life would be so much different and wouldn’t continually fall on the shoulders of women exclusively.

Never Rarely Sometimes Always is not a movie that could have been made by a man, and it’s not surprise that director Eliza Hittman was also the writer of the screenplay. Men can certainly be empathetic to these ideas, but will never have this lived experience.

It’s worth noting that just like this movie is about abortion on the surface and so much more underneath, the same can be said for the performance of Sidney Flanigan. She seems disaffected on the surface, but this is to mask a deep numbness, a sense that she has any real agency. She sees the life her mother has and knows this will be her life as well. The opening moments of her performing on stage might well be the furthest a fulfillment of any dream she has might go until she ends up in the same life she sees in front of her. This sense runs deep, even if it’s never expressly spoken.

This is a hard film to genuinely like, but one that is impossible not to respect. Well, I imagine there are plenty of anti-choice folks who won’t like it.

Why to watch Never Rarely Sometimes Always: It’s important, and not just “big issue” important.
Why not to watch: This is a conversation that not everyone wants to have.