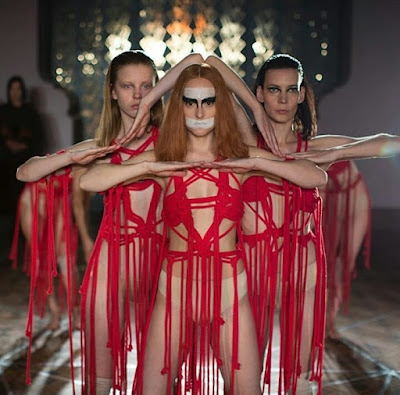 Sometimes, I admit, I’m not that keen on catching up with a movie even if it’s been very favorably reviewed. The rebooted Suspiria from 2018, for instance, got reviews in at least the same area code as Argento’s original. Both of my daughters are dancers, or were; my older one is a professional and teaches ballet and my younger one danced seriously until recently when she started college. Since Suspiria, both the original and this version, deal with dancers who find themselves involved in a coven of witches, I find my connection to it a little…odd.

It’s hard to call this a remake of Argento’s film so I won’t do it. It seems rather more like a reimagining. There are clear connections to the original version, of course, but there are also considerable differences. One of those differences is the length. This new vision of the story is nearly an hour longer than the original. A lot of that hour is going to be dance performances, which are honestly slim in the first film. Another major change is the type of company. The 1977 film is about a ballet troupe, but this modern version is about a modern dance company. That may not seem like a difference, but it really is a significant one.

The elevator pitch of Suspiria is that a young American dancer arrives in West Berlin in the late 1970s to join a dance troupe. She does, and over time she learns that the troupe is run by a coven of witches. In this case, that coven worships three ancient witches called the Three Mothers. They are called Mother Tenebrarum (darkness), Mother Lachrymarum (tears), and Mother Suspiriorum (sighs). Based on those names, it shouldn’t be hard to figure out which of those mothers is central to this story.

Our American dancer is Susie (Dakota Johnson), who is hoping to become a part of the Markos Dance Company. We learn that Susie is wildly talented, and soon rises in the estimate of Madame Blanc (Tilda Swinton), the company’s artistic director. Over time, we learn that there are strange things afoot in the company including a number of missing young women. We see first hand that as Susie performs a dance, her actions have a terrible effect on another dancer. Eventually, it comes out that the coven are using these young dancers as a way to prolong their own lives. This is a significant plot point, since it very much appears that Susie is the chosen next vessel.

Through all of this, there is an old German psychiatrist who is actually played by Tilda Swinton under a couple of dozen pounds of makeup and prosthetics. The doctor begins looking in to the dance company when one of the dancers vanishes after telling him that the school is run by witches. There’s a lot more, of course, but this covers the basics.

The question, of course, is whether or not this is a good film regardless of its connection to Argento’s original. That’s not an easy question. These are very different films despite their similarities. Argento’s film is, at times, almost incoherent. It’s a movie that was designed to feature a couple of specific scenes and to have a particular look. In that respect, this new version is better because the story is a lot more coherent. On the other hand, it’s also a lot more drab. Much of Argento’s film was about the look. It was designed to look like what Argento thought that a Disney horror film would look like and this version is all earth tones and red. It’s not a bad choice, but it is a very different one.

I actually like the dance performance here. It’s aggressive and it fits with the plot and the overall tone of the story. The characters are also not the stand-ins for 12-year-olds that Argento’s film was. But it’s also, for all of the gore and nastiness, a film that feels less feral than Argento’s film. It’s not that it’s somehow cleaner or nicer, but that in giving us something at least remotely more coherent, it has become less wild and unpredictable.

This is a fine film, but I don’t know if it’s a great one. For as much as the original Suspiria makes as much sense as a flavored suppository, it was fascinating to look at and to have wash over oneself. This one is less like that, partly for all of the browns and taupes and tans, and partly because it does feel restrained despite the length. There’s no reason this should be just north of 2 ½ hours long. It wouldn’t be hard to cut a solid 30 minutes of it.

Why to watch Suspiria: For a wonder, it kind of makes sense and the dancing is good.
Why not to watch: It’s at least half an hour too long.