Films: The Mitchells vs. the Machines
Format: Streaming video from NetFlix on Fire! 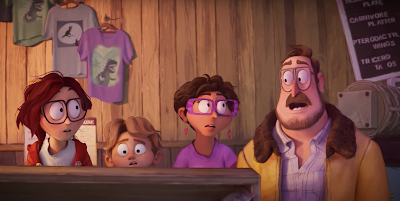 Approaching animated film for this blog is always something interesting, especially since Oscar has gotten more adventurous with its nominations. That said, there are often issues with animated movies, especially when they are clearly made for kids. Oh, they’re often fun and entertaining, but they are also often designed to be funny in different ways for parents and kids. And, because these movies are often made with kids in mind, they are often cruel to the parents. I’m a sucker for an animated movie that deals well with the parent/child relationship. Bob Parr struggles with connecting with his kids in The Incredibles in a believable way. Gru in the Despicable Me movies is clearly a great dad who loves his kids. And now we have The Mitchells vs. the Machines, which is damn near perfect.

There are two stories here that are going to converge. The first concerns the Mitchell family. We’re introduced to Katie Mitchell (Abbi Jacobson), who has always been the weird kid in her town. Katie’s youth has been spent making movies on the family camcorder, a hobby that has gotten her accepted to film school in California. This has proved an additional wedge between her and her technophobic father Rick (Danny McBride), who struggles to understand his daughter. The family is rounded out by mom Linda (Maya Rudolph) and dinosaur-obsessed son Aaron (writer/director Mike Rianda), both of whom are bizarre in their own ways. Katie is desperate to get away from her family and connect with who she sees as her people.

In an effort to reconnect with Katie after accidentally destroying her laptop, Rick decides that the family will instead drive her across country as a final family trip before she starts college. Katie is clearly unhappy with this but puts on a brave face for the sake of the family.

The other story concerns the Steve Jobs-like Mark (Eric Andre), who runs an Apple-like company called PAL. Mark has been selling his iPhone-like PAL for three years, but is now preparing the upgrade, essentially household robots that do everything for the user. As he debuts the product, his old PAL phone (Olivia Colman) is casually tossed aside and discarded. Feeling hurt, she takes over the new household robots, creating a worldwide robot uprising. The robots, sickened by humanity a la The Matrix capture the entire human species and put them into spaceships that will simply blast off into space with no destination (but with free wi-fi). And, of course, of all of the families to avoid being captured, including the Mitchells’s perfect neighbors, it is the Mitchells who manage to avoid being captured. It is now up to them to defeat the robot overlords and PAL and, hopefully, not kill each other.

There’s a lot to love here, and I do mean that. In addition to a very entertaining story and excellent voice work, there are near-constant jokes. The Mitchells’s neighbors are voice by Chrissy Teigen and John Legend, with dino-obsessed daughter Abbey voiced by Charlyne Yi. The interactions between Aaron and Abbey are some of the best of the film. We’re also going to spend a lot of time with Monchi, the family dog, who is frequently mistaken for both a pig and a loaf of bread. As with many an animated film, it’s the animal companion who is the true star.

Another source of comedy comes from Eric and Deborahbot 5000 (Beck Bennett and Fred Armisen respectively), two of the PAL androids that have malfunctioned and instead decide to help the Mitchells, eventually imprinting baby duck-like on Linda.

Here's what makes it all work, though. If The Mitchells vs. the Machines was nothing more than this bizarre family of misfits trying desperate to save the planet with inexpert help from the damaged robots and their mutant dog, there would be a lot to love. But like any good film, this is about so much more. It’s about the relationships between the family members. It’s about understanding who these people in your family are and knowing that despite differences, that they will be there for you.

There’s a trope in many a film and novel about the idea of “found family.” Family are the people who act like family, regardless of blood connection. Shows like “Band of Brothers” are about that kind of bond, and plenty of movies—particularly action movies—are about people who form this sort of familial bond that goes well beyond blood relation. The Mitchells vs. the Machines is the opposite of that. This is not about found family, but about a family that finds itself.

I never thought I would say this, but I think this might actually be a better animated movie than The Incredibles. This doesn’t have a hope of winning the Oscar--Encanto or Luca will win 99 times out of 100, but I’m damned glad this got a nomination, because it’s absolutely a joy.

Why to watch The Mitchells vs. the Machines: It’s pure joy.
Why not to watch: Oh, it could go longer and I’d be fine with it.