I came out of the gate in January a lot faster than I ended last year. While I’m still well below my normal pace, getting through about 30 movies in the month felt like a return to normalcy. A good percentage of those movies are ones that come from this list—I moved a lot of films (and a lot of longer films) off the list. It feels good to be back doing this again even though it’s still less than my normal. 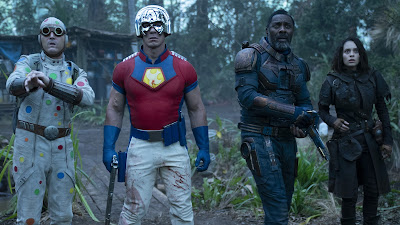 The more I see from both Zack Snyder and James Gunn, the more I see them as versions of each other. Essentially, I think Snyder is a serious version of Gunn. The problem is that Gunn doesn’t work as a serious director. Gunn wants to have fun in his movies, and The Suicide Squad is exactly that. It’s gross and ridiculous, and the ultimate bad guy is a Stay-Puft Marshmallow Man version of Patrick Star with blue highlights. How can you not enjoy watching this? Yes, it’s violent and ridiculous and that’s exactly the point. This is exactly what the DCEU needed—it’s fun. 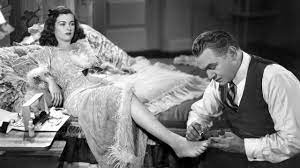 You have to wonder how it’s possible that Edward G. Robinson went his entire career without being nominated for an Oscar. Scarlet Street ranks among his best work. This is a pitch-black noir, one in which nothing good happens to anyone, particularly our sad sack clerk/amateur painter played by Robinson. Joan Bennett plays our wicked femme fatale who is obsessed with her bad apple boyfriend Johnny, played by the always wonderfully oily Dan Duryea. There’s nothing not to like here from the performances to the tight direction of Fritz Lang, with the possible exception of just how bleak it is. Since I’ve watched this, I have to think about what the biggest hole in my viewing history is now. 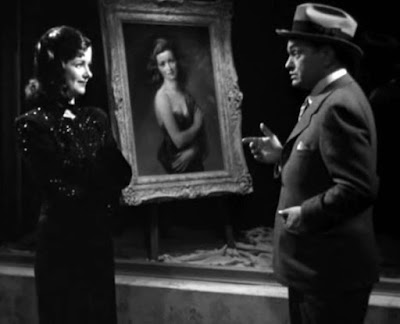 The Woman in the Window was released the year before Scarlet Street, but features most of the same players. This time, Robinson’s Professor Wanley encounters beauty Alice (Joan Bennett) and through a series of circumstances winds up killing her aggressive boyfriend (Arthur Loft). The boyfriend turns out to be a high-powered financier, and the pair are ultimately blackmailed by his driver/bodyguard (Dan Duryea). It’s a dandy noir marred by the ending, which doesn’t really fit the film or the style. All of the players involved did better in their careers, but that doesn’t stop this one from being pretty entertaining for the bulk of the running time.

The Old Guard feels like a riff on Highlander in a sense, although there isn’t a desperate need for everyone to kill each other. No, we have a team of people who are essentially immortal who operate as mercenaries because they generally can’t be killed. Oh, they can be, but most of the time, they come back. The plot revolves around a newly awakened immortal named Nile (KiKi Layne) being found by the current group of four and the pursuit of the immortals by a pharmaceutical company who want to harvest their ability to regenerate for medical research. Sounds corny as hell, but it’s a pretty solid actioner. Charlize Theron as always, is a boss, and I’m always happy to see Chiwetel Ejiofor in anything. 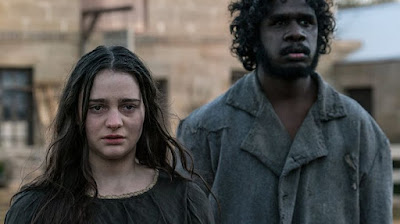 This is another of those films where nothing good happens to anyone involved, which made it a very difficult watch. A woman (Aisling Franciosi) sent to Australia with her husband as a convict is abused and raped by the commander of the local military troupe, who also kills her husband and child. Enlisting the aid of a local native (Baykali Ganambarr), she hunts them down for revenge. The Nightingale is brutal, and it’s a hard film to recommend because of it. Both Franciosi and Ganambarr are terrific in it, all the more impressive for Ganambarr as it is his screen debut. It’s a film I’m glad I watched, but probably won’t watch again. If you get through the first 15-20 minutes, you can probably make it all the way through.

What was in the water in 1965? Those Magnificent Men in Their Flying Machines featured an air race from London to Paris. The Great Race features an auto race starting in New York, heading west across the Bering Strait and then across Asia and Europe…to Paris. It follows in the “grand” tradition of Around the World in 80 Days. Tony Curtis’s perfect good guy faces off against Jack Lemmon’s total bad guy, who is aided by goofy assistant Peter Falk. Natalie Wood as a suffragette journalist rounds out the cast. This is evidently what passed for funny in 1965, but every moment is telegraphed and falls flat because of it. The best thing to come from this is that the Wacky Races cartoons were based in large part on it. 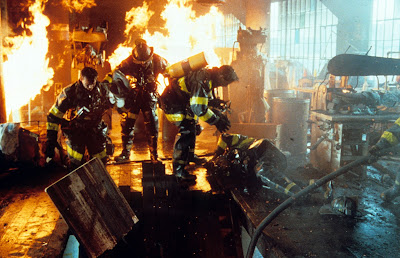 I know a lot of people really like Backdraft, and I guess it was probably a lot more impressive 30 years or so ago. It’s a little surprising this came out the same year as The Silence of the Lambs because there are parts of it that seem like this really wants to be that movie. However, instead of FBI agents hunting a serial killer, it’s Chicago firefighters hunting an arsonist. There will be plenty of rivalry and bad blood between firefighter brothers Stephen (Kurt Russell) and Brian (William Baldwin), with Robert DeNiro playing a fire investigator. The cast is decent and Ron Howard is a good director, but this is very melodramatic and predictable. I half expected the fire to twirl a pencil-thin mustache at one point. 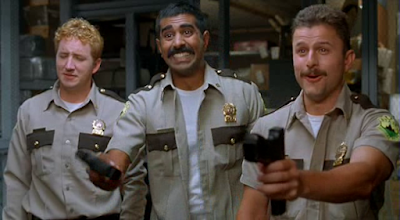 Super Troopers is funny like a cat sliding off a table is funny, or like old National Lampoon bits are funny. This isn’t highbrow humor, but a collection of bits wrapped around a plot concerning a rivalry between Vermont highway patrol and a team of local cops dealing with an influx of drug trafficking. It’s essentially a collection of drug and alcohol jokes and stupid pranks in pursuit of what eventually becomes a plot. There are two opinions regarding Super Troopers. The first is that it’s dumb and a waste of time. The second is that it’s stupidly funny. I’m of the second opinion. I also love that Shakespearean actor Brian Cox agreed to be in this…and he did the sequel as well.

Posted by SJHoneywell at 8:16 AM

Email ThisBlogThis!Share to TwitterShare to FacebookShare to Pinterest
Labels: Backdraft, Scarlet Street, Super Troopers, The Great Race, The Nightingale, The Old Guard, The Suicide Squad, The Woman in the Window, What I’ve Caught Up With