Films: The Man Who Changed His Mind
Format: Internet video on Fire! 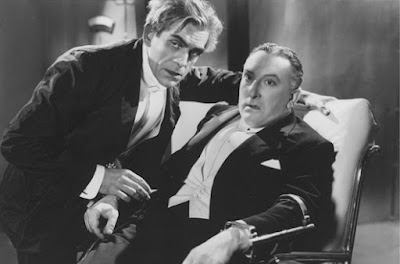 I love a good science fiction movie. One of the things I like about it is that it shares a long border with horror movies. Plenty of science fiction touches on ideas common in horror—the classic science fiction question is to ask us what it means to be human, and the answer is that sometimes it means being a monster. The Man Who Changed His Mind has that old school science fiction flare and that old-school horror sensibilities. It’s barely feature length, clocking in at just over an hour, but it packs a lot into that time.

We start with Dr. Clare Wyatt (Anna Lee), finishing up a surgery and saying that it’s her last surgery for a while. She’s going on to work with Dr. Laurience (Boris Karloff), an eccentric who is an expert in the mind. Claire is pursued by her love interest, Dick Haslewood (John Loder). Dick is the son of newspaper owner and wealthy philanthropist Lord Haslewood (Frank Cellier).

The long story short of this is that Laurience has discover a way to switch the mind of one animal with the mind of another. Naturally, he wants to try this on humans. He gets his chance when his research is shamed at an event and Haslewood, who has agreed to fund him, threatens not only to pull his funding but to keep all of his research and destroy his equipment.

The Man Who Changed His Mind does a number of things really well. First of all, the title itself is a rather clever pun. See, he doesn’t “change his mind” in the sense that he goes back on a decision that he has previously made. No, he literally “changes his mind” by exchanging it with someone else. See? Clever! It’s also rather progressive in giving us a woman who is an accomplished surgeon in 1936. Laurience calls her someone who can understand his work, and she is always portrayed in the film as capable and in charge. She doesn’t wilt at the first sign of danger, and that is quite refreshing. Also of note is Frank Cellier’s manic and fun performance when he is inhabited by the mind of another man. This is handled really well, especially when he is probing others for information that he is supposed to know.

And now for the downside—you knew there was going to be some. The primary downside of this is the overall length. The version I found runs 62 minutes, which is spare indeed. Many things happen very quickly here and these are often suspense moments that could be loosened up and something more made of them. The ending is too snappy as well and could stand to be drawn out a bit more.

It seems unfair to penalize this movie for the lack of a story that goes much longer than an hour, but there is definitely room for expanding the size of the narrative. A lot of what happens here happens very quickly and it doesn’t have to. There’s room to build up the suspense a bit and make it appear that no one knows as much as we hope they do. This could have 20 minutes added into it without a lot of trouble, and it would make for a better film all the way around. I’ll give a specific example here, but it is very much a spoiler, so you’ve been warned if you continue on from this point.

It's not a shock when Dr. Laurience starts switching human minds between bodies, of course, and it’s only a matter of time before he does this to himself. Laurience’s target is Dick Haslewood, who is Claire’s love interest. So, when he makes the switch, there’s a real possibility for Claire to be in the dark about the new mind inhabiting her fiancé’s body. However, she figures this out immediately when she sees Dick, who has never smoked a day in his life, holding a cigarette. There’s a good fifteen minutes of possible film involving her discovering what has happened here that has been left on the cutting room floor (or more likely never filmed). That’s disappointing because this would be worth having.

Ultimately, The Man Who Changed His Mind is par for the course for this era of horror film. It’s too short and gets to the ending too quickly. Tack 20-30 minutes on this and we’ve got something worth a lot more consideration. It’s fine, but it could be so much more.

Why to watch The Man Who Changed His Mind: Proto-science fiction/horror.
Why not to watch: It should be 50% longer because it leaves a lot of suspense out of the final product.

Email ThisBlogThis!Share to TwitterShare to FacebookShare to Pinterest
Labels: horror, Robert Stevenson, science fiction, The Man Who Changed His Mind