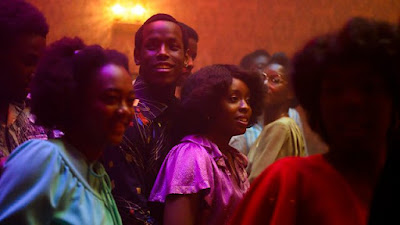 Say what you will about what the streaming market has done to the film industry, there have been some real positives. The amount of money that gets pumped into streaming companies has created an interesting renaissance in not just television but in film and what can be done with these media. The Small Axe anthology series is a case in point. Steve McQueen, fast becoming one of the premier directors working today, created a series of five films dealing with the lives of West Indies immigrants in the UK in the 1960s, ‘70s, and ‘80s. The films are unrelated to each other but are connected instead by themes. Lovers Rock is the second of the five films in the series.

These are actual films, not episodes of a television show. Evidence of that comes from the difference in running times if nothing else; Lovers Rock clocks in at a slim 70 minutes, and even that might feel a little long for the slip of a plot this movie contains. That’s okay, though. There’s not meant to be a great deal of plot here. It’s just the story of a party and of two people who meet there and begin something like a romance.

That’s really it. There are a few events that happen along the way, but really we’re just concerned with putting Martha (Amarah-Jae St. Aubyn) and Franklyn (Micheal Ward) together and getting them to stay together. There will be a few bumps along the way and there will also be a lot of music to help us get there, since virtually all of this is going to take place at a party featuring some very good reggae from the late ‘70s (the story takes place in 1980).

As such, there’s not a lot for what I typically write about here for me to go into, because there really isn’t a tremendous amount of narrative. There are things that happen—Martha stumbling upon what looks to be some very unwanted sex and some ugly threats by the now-frustrated man, her friend leaving the party angrily—but these are more events that happen during the party than they are elements that drive the story. No, the story here is Martha and Franklyn finding each other and being together.

And I cannot tell you how nice that is. I mean it. The fact that Lovers Rock is for the most part a joyous film and the story of people enjoying themselves is such a great pleasure for me.

The reason for that is simple. While I do spend at least some of my time watching horror movies, many of which are goofy and not very serious, a lot of what this blog does is look at the sorts of films that win Oscars or are considered “important” in that film snobby sense. As such, I am frequently forced to deal with topics that are unpleasant or difficult to watch, or that make me angry for a number of reasons. This is especially true with films that deal significantly with race. So many films by Black filmmakers and about the Black experience are about racism, about tragedy, about the perils of being Black in a world that judges on color. To have a film that is about Black folk singing and dancing, having fun and falling in love is an absolute joy. There’s no police raid, no one getting shot for a broken taillight, no one getting busted or killed in a drive-by. There’s none of that. It’s just good music and dancing and while there are some ugly moments, most of it is people enjoying themselves. It’s refreshing.

And so, while I don’t have a lot to say, I can say that I enjoyed this a great deal. The music is good (as the whitest of white guys, it was interesting to me to hear where The Clash got a lot of their sound for the Sandinista! triple album—a lot of this music sounds like they could have sampled it easily) and the people are having fun. I also love the way the language sounds. Our characters code switch from their normal accent to a Jamaican patois and back, often based on the intent of what they are saying and nothing more. It’s lovely to listen to for any language junkie.

Now I want to watch the whole series.

Why to watch Small Axe: Lovers Rock: It really is rather lovely.
Why not to watch: Not much plot.

Posted by SJHoneywell at 6:15 PM