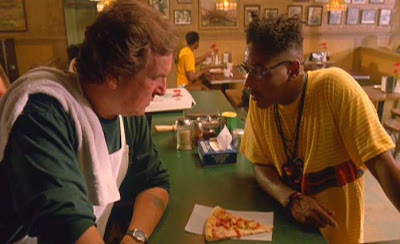 There are many people, many of them critics, who like to discuss particular films as being a part of one country’s cinematic tradition or another. There’s some validity to that, because there are films that could really only be made by the people of a particular nationality. To my mind, French cinema is often distinctly French, for instance. American cinema, though, is sort of the mutt of film styles, much like the country proclaims itself a melting pot. American cinema is all styles. Yet, there are some films that are distinctly American, deal with specific American problems, and could only be made by Americans in America.

One such film is Spike Lee’s Do the Right Thing. It tells the story of a single day in the Bedford-Stuyvesant neighborhood of New York. It also happens to be the hottest day of the summer, and everyone is on edge. What starts as a typical day in the summer quickly and inexorably escalates into chaos, rioting, and disaster. Is it the heat? Is it racial tension? Is it something else? Is it everything at once?

Few of the people on the block go by their real names. Our protagonist, or at least as close as we really have to one, is Mookie (Spike Lee). Mookie delivers pizzas for Sal (Danny Aiello) of Sal’s Famous Pizzeria, which stands at the heart of the predominantly African-American Bed-Stuy block. Sal is assisted by his two sons, Pino (John Turturro) and Vito (Richard Edson). Pino, the older of the two, hates the neighborhood, hates the pizzeria and more than anything, hates the customers who come in. Vito is less aggressive and more attuned to the neighborhood, and is more likely to stick up for Mookie than anyone else.

Mookie, while he delivers the pizzas, isn’t a very hard worker. He frequently takes breaks from deliveries and talks to the other people on the block. Most important for him are his sister, Jade (Joie Lee) and his girlfriend and mother of his child, Tina (Rosie Perez). Also on the block are Buggin’ Out (Giancarlo Esposito), Da Mayor (Ossie Davis), Mother Sister (Ruby Dee), Radio Raheem (Bill Nunn), the stuttering Smiley (Roger Guenveur Smith) and a cast of dozens, including small roles for Martin Lawrence, Frankie Faison, and Robin Harris, who plays the awesomely named Sweet Dick Willie. All of this is overseen by Mister Senor Love Daddy (Samuel L. Jackson), the local DJ.

The bulk of the film is the people on the block dealing with the heat and each other. There’s an undercurrent of racial tension throughout the neighborhood. When a white man accidentally scuffs Buggin’ Out’s new Air Jordans, a riot nearly ensues. The bulk of the neighborhood verbally attacks, upset that the man owns a brownstone in the area, and further upset when he claims to have been born in Brooklyn rather than a white stronghold like Massachusetts. There is equal tension over the local Korean grocery store.

Most of the ire is reserved for Sal, though. Sal likes the neighborhood even though Pino wants to leave it. In a long speech, Sal comments that he’s proud to be a part of the neighborhood, and proud the that locals have grown up eating his food. Pino hears none of it, though, and can’t repress his anger at being forced to spend time in a part of the city he feels is beneath him.

Things start to come to a head when Buggin’ Out notices that the Wall of Fame in Sal’s only has pictures of Italian-Americans on it. Since they are in a predominantly black neighborhood, Buggin’ Out wants, as he says, some brothers on the wall. Things get more tense when Radio Raheem, his gigantic boombox blasting Public Enemy’s “Fight the Power” asks for a couple of slices, but refuses to turn off the music.

Slowly, inch by inch, the tension gets ratcheted up until it finally reaches a breaking point. The end of the film, while perhaps predictable, is predictable only because it is also inevitable. The tragedy here is not that the story essentially ends with a riot, but that like happens so often, things escalate into insanity from such a simple, mundane, banal beginning.

There are no answers here, only questions—the mark in my mind of a great film. The questions are made more difficult by one simple fact: Mookie, the one person who lives in both worlds (and in meta-thinking, the guy who wrote, directed, and produced the film), is also the one who causes the incident inciting the riot at end film’s climax. Mookie is the one who touches off the crowd despite his allegiance to Sal and the pizzeria.

Who’s right here? Doesn’t Sal have the right to hang what he wants on the walls of his own place? Does Buggin’ Out have a point that he should be more attuned to his customers if he wants to be a part of the neighborhood?

This is a film that demands not only to be watched, but to be discussed, at length, and with a mind toward frankness and openness on all sides. Put bluntly, this is Spike Lee’s best and most thought-provoking film. If the 1001 list were reduced to 10% of its size, I’d argue for this film to stay on it. It’s that good, and it’s that important.

Email ThisBlogThis!Share to TwitterShare to FacebookShare to Pinterest
Labels: Do the Right Thing, drama, Spike Lee