So it feels like forever since I’ve watched a movie, and it has been more than a week. The rigors of real life sometimes get in the way of our avocations, and the end of a quarter for me means mountains of grading papers, which means no ability to concentrate on a film. I’ve been aching to watch something, and finally feel like I can watch in peace now that the quarter is done. 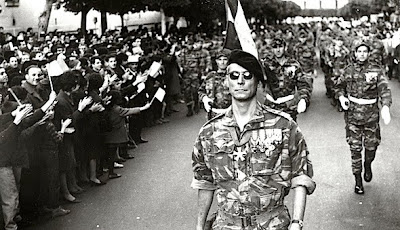 Today’s film is La Battaglia di Algeri (The Battle of Algiers), a film so controversial that it was banned in France the moment the film was exposed, just about. I’m often surprised when a film is banned in some places, France being a place that to me seems like it would have a more open policy on the controversial and unusual. However, having seen the film, I understand why it was banned. I may not agree with the decision, but I understand it.

I can also see that the film would be highly controversial today in this country. Looking at the wars this country is fighting, any film about a battle for freedom, particularly a battle that involves liberal uses of terrorism on the one side, and torture on the other. There’s something here for virtually anyone and everyone to be offended by, and methods used that are distasteful and unpleasant.

This is the story of the Algerian battle for freedom against the French colonial forces occupying the country. The battle took place in the mid-late 1950s, shortly after the French were summarily pushed out of their colonies in Vietnam by the rebellious forces there. The French military, thus, had something to prove, having been recently embarrassed, and took the opportunity to come down on Algeria with an iron hand.

The Algerians, who wanted their freedom, responded in the only way they had available to them—with acts of terrorism. The film is unflinching in its revelation of the methods used on both sides of the conflict. The French torture their captives in their attempts to roll up the various cells of Algerian rebels, claiming only that they use valid interrogation methods to get the information they need to find other members of the FLN, the Algerian resistance. Several scenes of this are depicted, and depicted harshly. Men are nearly drowned, beaten, burned with blowtorches, suspended by their hands and knees, and shocked with electrodes. In one case early in the film, a man is executed with a guillotine. It’s brutal and harsh, and easy to side with the Algerian cause.

However, filmmaker Gillo Pontecorvo does not make that decision an easy one, or even the only possible one. The FLN counters the French domination with random murders of police officers, looting the corpses of guns to use in further assassinations. As a more direct and terrible method, women are recruited to plant bombs in bars, cafes, and at the airport, killing innocents. Again, there is little disguising of the results of such actions. We are shown the innocent civilians before the bomb explosions—young children eating ice cream, teenagers dancing to popular music—and then the terrible results of the terrorist blasts.

By exposing both sides of the conflict in this way, Pontecorvo does not provide any easy answers, but instead gives us nothing but difficult questions. What lengths should people be willing to go for their freedom? Are some methods too far? Is it the soldier’s job to moralize his responsibilities, or simply his task to follow the orders he is given? What right does one country have to occupy and pacify another? What methods can be or should be legitimately used to be victorious in a battle or a war?

Tough questions, and questions worth talking about and thinking about. La Battaglia di Algeri asks them not because the answers are easy or obvious, but because they are so difficult and need to be asked. Avoiding the difficult questions keeps us from moving forward, and forces us to repeat things like this terrible war. It’s worth watching for the same reasons.

Why to watch La Battaglia di Algeri: Asks questions more relevant today than 50 years ago.
Why not to watch: The only answers you’ll get are the ones you come up with yourself.
Posted by SJHoneywell at 10:50 PM