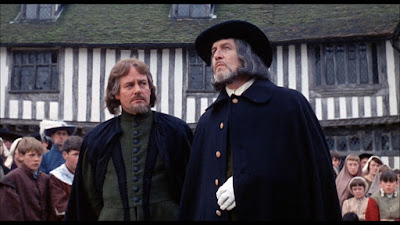 Witchfinder General is one of those movies that comes with a great deal of additional baggage in the vast number of names it goes by. The copy I got was titled Matthew Hopkins: Witchfinder General, and I’ve seen it listed as Edgar Allen Poe’s Witchfinder General. It was also released in the States as The Conqueror Worm another weak attempt to connect this story to the canon of Poe despite it having no connection at all.

Sherman set the Way-Back Machine for the time of Oliver Cromwell and civil war raging across England. While Cromwell’s troops attempt to purge Catholicism from Great Britain, Matthew Hopkins (Vincent Price) moves from town to town conducting trials to find witches. This goes about how you would expect based on what history you know from these days. Someone accused of witchcraft is put on trial and endures a variety of torture, in this case at the hands of Hopkins’s assistant John Stearne (Robert Russell). Eventually, they are put to a final test which is either fatal, proving their innocence or valid confession, or not so fatal, which means a horrible death.

Into this lovely world we have Richard Marshall (Ian Ogilvy), one of Cromwell’s soldiers. Richard wants nothing more than to marry Sara (Hilary Heath), the niece of John Lowes (Rupert Davies), the priest of a small village. This is despite the fact that Cromwell was pretty staunchly anti-Catholic. Anyway, you can almost certainly see where we’re going, right? Matthew Hopkins is riding into town on the word that there are witches about. It’s not Sara who will be accused, but John Lowes, and as has already been discussed, being accused is good enough to get you dead one way or another.

Sara’s part in all of this is to attempt to seduce Matthew Hopkins in an attempt to save her uncle. This works for a time, but not too long, and eventually John Lowes is going to be executed one way or another. Eventually, the word of all of this gets back to Richard, who sends Sara off to another town, and despite the potential penalties of desertion from Cromwell’s army, begins his quest to find and destroy both Matthew Hopkins and his torturer-in-chief John Stearne.

Witchfinder General has a great opening, one that it can’t quite live up to for the rest of the film. In that opening, we see an accused witch being dragged off to her execution, screaming all the way. There are dozens of peasants watching and while she screams and pleads, a clergyman of one stripe or another intones text presumably from the Bible. And, moments later, our witch is hanging by her neck while in the background, Matthew Hopkins rides away.

Much of the rest of the film strives to live up to those opening moments and can’t quite do it. That’s okay, though. Not unlike a film like Black Sunday or The Letter from 1940, the opening is just strong enough that the rest of the film pales in comparison. The reason for that is that it ends up being specifically about Richard discovering that Sara has been more or less defiled by Hopkins and then him setting off on his revenge. There are a few moments here and there where Hopkins invents a new way to kill people (this is really just a new way to light a witch on fire), but otherwise, it’s a drawn out revenge story.

I do appreciate near the end of the film where Hopkins overtly demonstrates just how morally suspect his profession is. As we near the end and Hopkins and Stearne have both arrived in the town where Sara has fled and Richard is closing in, Stearne expresses how terrified he is of having a soldier of Cromwell coming for his head. The response from Hopkins is, while not unexpected, mildly terrifying. All they have to do, he says, is accuse them both of witchcraft and their problems are solved. In a few spare moments, it’s a clear example of the corruption of real power.

Ultimately, this is a fun costume drama, and it’s always entertaining when Vincent Price is allowed to put the bit in his mouth and really run with a truly evil character. I like that even though the ending is rushed it gets very dark in surprising ways. It’s a bit unsatisfying and a bit unfocused, and any attempt to connect this to Edgar Allen Poe is ridiculous. But it’s fun, and I think that might be enough.

Why to watch Witchfinder General: It goes dark in an unexpected way.
Why not to watch: The ending is a bit too quick.