Film: The Favourite
Format: DVD from NetFlix on The New Portable. 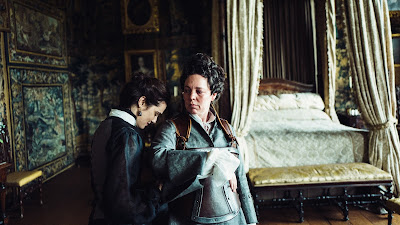 Based only on my prior knowledge, I was surprised at the nomination of Olivia Colman for The Favourite. This is nothing against Colman, who I have loved in television roles for several years. I know her primarily from her work on sketch comedy shows with David Mitchell and Robert Webb, as well as from Hot Fuzz. And thus my surprise; Oscar seems to not so much dislike comedy as not really care that it exists. While I love Colman’s work, she seems like a terrible fit for Oscar’s typical Best Actress category. It was even more surprising to me that she won, and for the same reason.

Well, I’ve seen The Favourite now, and I have to say that there’s a part of me that is still surprised that she won. Again, this is nothing against Olivia Colman. It has everything to do with what feels like category fraud. The Favourite notched three acting nominations—Colman for Best Actress and both Emma Stone and Rachel Weisz for Best Supporting Actress. The problem is that Stone is clearly the main character of the film and gets the most screen time. While it’s true that Colman’s Queen Anne is the emotional and narrative center of the film, she’s not the main character nor does she have the main character arc.

The Favourite is the story of the infighting and machinations of Queen Anne’s court in the early 18th century. Queen Anne (Colman) suffers from gout and otherwise has far too much time on her hands. She spends a great deal of her time with her 17 rabbits; she has one for each of her children that have died. While she rules in name, much of her policy is put in place by Sarah, Duchess of Marlborough (Weisz), who exerts a great deal of influence over the queen through a variety of methods, including sexual favors.

Into this world comes Abigail Hill (Stone), a poor cousin of Sarah. Abigail has been cast down to a low state, having been literally gambled away by her father. She has come to court looking for work and is employed as a scullery maid. However, she takes it upon herself to work up a temporary cure for Anne’s gout, which puts her in favor with the queen, who promotes her to lady of the bedchamber. In this position, she has a great deal of access to Queen Anne, something much desired by Robert Harley (Nicholas Hoult), the cosmetic-wearing, wig-coiffed leader of Her Majesty’s opposition.

While much of the background of the story concerns the war with France, it is the dealings and double-crosses between Abigail and Sarah that take up much of the narrative. Anne is depicted in many ways as someone who is quite unable to make decisions on her own, almost childlike and easily manipulated. And so, the back and forth of manipulation begins, with both Sarah and Abigail doing everything they can to outsmart and outwit the other. This involves finding new ways to spend time with (and pleasure) the queen as well as hurting each other in any way possible.

I’ve classified The Favourite as a comedy, and it more or less is one. That said, it’s a comedy of the blackest and darkest sort. The things that happen here that are funny are also dark and terrible in many respects. Nothing that goes between Sarah and Abigail is friendly. It starts with Abigail’s arrival in court, with Sarah immediately exerting dominance over her poor cousin by verbally destroying her for no reason other than, by virtue of her position, that she can. It’s dark, but there are moments here where the laughs are real and genuine as well as being vicious and pointed.

All three of the female leads are tremendous. In truth, I have to admit that Colman’s category fraud may well be fraud in the other direction. In a completely fair world, both Weisz and Stone would be considered leads as much as Colman is. If we’re going to pick a single lead, I’d go with Stone, but in a world where three actors were once nominated as leads in the same film (Mutiny on the Bounty in 1935, for the record), there’s no reason it couldn’t happen here.

The genius of Colman’s work here is that for a good part of the running time, Anne is clearly childlike, confused, and unable to make a real decision. And yet, as the film goes on, it becomes more and more possible that this is an act designed to make people thinks she is helpless and easily taken advantage of. Colman plays this perfectly, and it’s impossible to tell moment by moment how much she really knows or cares until she reveals the truth.

I’d also like to give a shout to Nicholas Hoult. Hoult is a fine actor, and I think he may well get himself a golden statue one of these days. I’d have loved to have seen him nominated here, because he holds his own with Stone, Weisz, and Colman as much as they hold screen attention against each other. The Favourite is fascinating because it’s not sure what it’s going to end up being. Is it a comedy? Kinda. A romance? Sorta. A drama? Substantially, but not exclusively. In that respect it needs to know a little more what it wants to be, but whatever it is, it’s worth seeing.

Why to watch The Favourite: Towering performances all around.
Why not to watch: It’s not sure what it wants to be.