Wednesday Horror: Let Me In

Film: Let Me In
Format: DVD from Cortland Public Library on The New Portable. 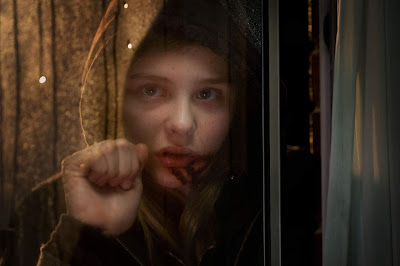 A movie like Let Me In puts me in a very difficult position as a reviewer/critic and as a movie fan. The original version of this movie, Lat den Ratte Komma in has been regularly (and rightfully) hailed as one of the great horror movies of the current century and one of the better takes on the vampire myth in general. The problem with it in the eyes of American film companies is that it wasn’t an American movie. Watching it meant dubbing or reading subtitles while listening to the original Swedish, and what sort of American wants to do that? And so, a mere two years later, Let Me In, a version of the movie that appears to change only the names of the characters and the location of the story, was produced.

Here’s the quandary: Let Me In is a good movie. It genuinely is. It’s well cast and acted throughout. The story is a good one that has seemed to survive its translation from the Swedish into English without much loss. Kodi Smit-McPhee is a great choice for the bullied young boy (he looks like a professional victim), and this also features Chloe Grace Moretz early in her career. There’s also a good role for Richard Jenkins, who is a damn fine actor. And yet I still feel like this has the scent of reheated leftovers in a large way.

As a side note, Richard Jenkins grew up in the town I live in, and he still shows up now and then. Last year, the local arty theater did a Richard Jenkins film festival, showing nine or ten of his movies, one per week, for a couple of months, ending with his Oscar-nominated performance in The Shape of Water. The films were selected by Jenkins himself and included a few train wrecks like Eat, Pray, Love but didn’t include this one despite its critical acclaim. I think that says something.

I’ll keep it simple in terms of the plot. Owen (Smit-McPhee) is roughly 13 and living in Los Alamos, NM with his mother, who is in the process of getting a divorce from her husband. Owen is small and meek, which makes him a target for bullies, especially Kenny (Dylan Minnette). Meanwhile, Abby (Moretz) and what appears to be her father (Jenkins) move into an apartment in Owen’s complex. Abby is an odd girl, and over time, Owen discovers that she is a vampire and that her “father” is more her servant/handler, who kills people, drains their blood, and uses that to feed her. When he is killed in an accident, Abby is left on her own, and while Owen would like to protect her, he is unable to protect himself from increasingly violent and terrible bullies.

It’s a good story. In fact, it’s a good enough story that even a retreaded version like this one is difficult to screw up badly. Let Me In, for any number of reasons, is a good movie, and I hate that I have to say that, because it also feels so damnably lazy in so many respects. This isn’t a case of someone creating a new take on the vampire myth or telling an old story in a new way. This is a case where an already established movie has been given a fresh coat of paint that is almost exactly the same color as the original.

There’s so much here that I don’t understand. One of the main visual points of the original film is the setting and the timing of the film. It takes place in the winter, and the fact that Abby (Eli in the original) is unaffected by the cold is important. So I get that because of its altitude it gets cold and snows in Los Alamos, New Mexico, but why set the film there? Why not somewhere more known for cold? This story would work just as well in northern Michigan or in Minnesota.

That’s a little frustrating, but I can live with it. A much more frustrating issue for me is that there’s nothing new in this version. While it’s not a shot-for-shot remake of the original film, it might as well be for all of the difference there is in the story. Even the scene where the attacked neighbor bursts into flame in sunlight is here—there’s nothing here that didn’t exist in a movie from two years previous. The only real change is in the language because evidently people won’t watch something with subtitles.

And that’s what angers and frustrates me. If I’m honest, I can’t say that this isn’t a good movie, and had this been the only version of the story that existed, I would love it. But it’s not. There’s a better version available, and there’s no reason for this movie to exist.

Why to watch Let Me In: The story appears to be more or less bulletproof.
Why not to watch: Seriously, why was this needed?

Email ThisBlogThis!Share to TwitterShare to FacebookShare to Pinterest
Labels: horror, Let Me In, Matt Reeves, romance