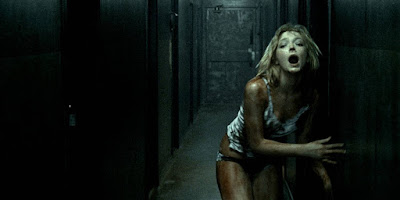 There are times when I watch something, get to the end, and really wonder what the hell I’m going to say about it. Cold Prey (Fritt Vilt in the original Norwegian) is one of those films. This is the sort of film that, when it finishes, feels like you haven’t really seen anything at all. It’s almost entirely transparent in that respect. There isn’t so much a plot as there is a series of consecutive events, many of which involve a killer with a pickaxe. And then, a touch more than 90 minutes after it starts, the credits roll, and not a single person’s life is different in any meaningful way.

A group of five young people head out to the middle of nowhere to go snowboarding, because (surprise, surprise) winter sports are a big deal in Norway. Our five are Jannicke (Ingrid Bolso Berdal), her boyfriend Eirik (Tomas Alf Larsen), newly minted couple Ingunn (Viktoria Winge) and Mikal (Endre Martin Midtstigen), and fifth wheel Morten Tobias (Rolf Kristian Larsen). They get to a completely out of the way part of the mountain and start down. And, just like mom always said, it’s all fun and games until someone gets hurt. In this case, it’s Morten Tobias, who takes a bad spill and breaks his leg.

Desperate to find help, the group spots a hotel and heads for it. It turns out that it’s been deserted for 30 years, but the group needs a place to stay and Morten Tobias is in a lot of pain. Into the hotel they go. They explore a little bit, find a few creepy areas of the hotel, and settle in for the night. Mikal and Ingunn have a fight, she storms off, and that’s when Ingunn learns that they are not alone. The hotel has another resident and he’s both armed and insane.

And that’s literally it. Five people get hunted by a dude in a huge winter coat and wielding a pickaxe until the credits roll. We’re given some sort of attempted justification of who the killer is and why he’s a killer, but it’s almost entirely pointless. By the time we get to this big reveal, the actual identity of the killer doesn’t matter at all. It’s entirely pointless and the reveal isn’t that revealing. Instead, it just feels like an excuse to have things happen in a particular way.

We’re not even really given a great deal of characterization of the five people. Morten Tobias is evidently the joker of the group and he’s apparently got a thing for Jannicke. That, plus his broken leg, sums up the entire character. What do we know about Ingunn? Only that she thinks sex with Mikal right now is too fast and that she’s evidently still a virgin. Of Mikel and Eirik we know almost nothing of importance. And Jannicke is in that respect the blandest final girl you can think of. If you’ve seen this film, I challenge you to relate to me one character trait that Jannicke possesses.

Cold Prey seems to exist in a very specific niche. On the one hand, it’s not that scary and while there’s blood and some medical nastiness regarding the broken leg, it’s pretty tame. There’s not an actual story here beyond people trapped in an abandoned building have to fight against a killer. There’s no character depth or growth, and even the bad guy seems like he’s walked onto the set from another movie.

But is Cold Prey bad? It’s not great. For a film that carries this little plot, you might think that it would be long on gore, but that’s not the case. It’s just people in a hotel getting attacked. They don’t even run through the hotel that much.

There’s a movie buried in this somewhere. There’s a potential story there that is interesting and worth seeing as well as being worth making. Sadly Cold Prey isn’t that movie. Give me at least one character worth caring about and a bad guy who isn’t just a plot device and we can talk. Until then, there’s nothing here worth a second look or a second of your time.

Why to watch Cold Prey: “Pickaxe” is not a common slasher weapon.
Why not to watch: It’s essentially plotless.