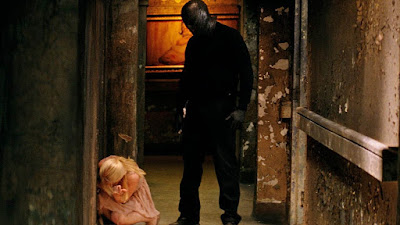 I got an Amazon Fire for Father’s Day, which will be one of the ways I end up watching a lot of streaming movies in the future. The Collector may be the first movie I’ve reviewed with this viewing method, but it’s not the first movie I watched on this device. I broke it in with something better and far less odious.

The horror world has a number of subgenres. For instance, there is the torture porn subgenre, of which I am very much not a fan. There’s also the home invasion subgenre, which has a surprisingly large number of films in it. The Collector from 2009 (not to be confused with the vastly superior film of the same name from the ‘60s) is a bit of both. It’s also a film that requires a vast amount of suspension of disbelief. To make The Collector work in your head, you have to make a lot of allowances for what is happening on the screen. This is a reverse of Home Alone, where the home intruder has managed to set up a number of dangerous and potentially lethal booby traps. How? When did he find the time to do this? Shut up and turn your brain off and watch the movie.

See how many logical leaps we can navigate here. After our initial scare scene, we meet Arkin O’Brien (Josh Stewart), who works as a handyman for the very wealthy Chase family. Arkin is also cursed with a wife who has multiple debts due to loan sharks. Why? Plot. And so Arkin is going to sneak into the Chase house and steal a gigantic, fist-sized ruby that they have. Why do the Chases have a massive ruby? Plot. At least this made sense in The People Under the Stairs.

Sadly for Arkin, though, the night that he chooses to rob the Chases happens to be the night that a psychotic killer, the collector of the film’s title, has decided to attack the Chases as well. We learn eventually that this killer essentially “collects” people. He breaks into a house and kills everyone but one person, who he takes with him—although this is ultimately not really clear. What is soon evident is that the father, Michael (Michael Reilly Burke) and his wife Victoria (Andrea Roth) are getting the brunt of the Collector’s abuse. Older daughter Jill (Madeline Zima) is out (don’t worry, she’ll be back and will be the film’s one brief foray into nudity), and younger daughter Hannah (Karley Scott Collins) is somewhere hiding in the house.

Now, here’s where things simply do not make any sense to me, and they shouldn’t make much sense to anyone who spends more than 30 seconds thinking about this movie. The Chase’s house is covered in elaborate booby traps. And I do mean elaborate. Michael Chase grabs a golf club at one point which leads to a series of Rube Goldberg-style events that eventually see him snared and hoisted up by his leg and then dropped down the staircase. There are multiple traps like this. One room is lined in bear traps, for instance. How did he have time to do that? How did he have time to rig massive booby traps that fling people across a room or hang dozens of fishhooks from a ceiling?

Beyond that, The Collector isn’t a film that is about anything but causing as much pain on people as possible. It’s very much a torture porn film, and not one that offers things that break this up or do anything other than just show us things that are ugly. A film like Martyrs is a hard watch, but there’s a point to it. It’s not a movie I want to watch again any time soon, and probably will never watch again, but the movie and the filmmakers had something to say. The same is true of a film like Requiem for a Dream or Funny Games. Saw (at least the first one) at least puts the characters in a terrible position. These are films that had a purpose. The audience left with something even if they had to go through a cinematic hell to get to it.

The Collector is not this. This is cinematic nihilism. There’s nothing in this movie to recommend it. It’s an ugly spectacle designed to see just how much depravity and pain can be put on the screen. How much will the audience be willing to sit through? Let’s find out.

What’s worse is that it doesn’t even earn its stupid ending.

Why to watch The Collector: You have 90 minutes to kill and a taste for cinematic nihilism.
Why not to watch: It’s pointless, dumb, and requires more willful disbelief than any science fiction, fantasy, or magical realism film.

Posted by SJHoneywell at 6:58 PM