Presumably, Right by the Cow

Films: Over the Moon
Format: Streaming video from NetFlix on Fire! 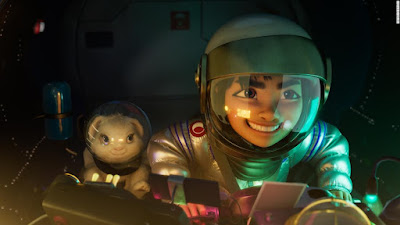 Once upon a time, there was a group of animators who really, really wanted to work for Disney. They tried as hard as they could, and they learned how to make characters that looked like they belonged in Disney movies. They studied all of the Disney tropes, trying to incorporate all of them into their movie. We’ve got a full musical complete with upbeat and downbeat tunes and a reprisal. We’ve got a plucky lead who is misunderstood and has a particular knowledge set that dwarfs that of adults. We have an animal sidekick, comic relief that shows up half-way through the film, and even an annoying sibling. Hell, there’s even a dead mom! And yet, Over the Moon is not a Disney film, but one from NetFlix animation.

Over the Moon is the latest animated film in NetFlix’s desire to be the streaming service that is all things to all people. I think it’s a smart movie. There are a lot more foreign language films on NetFlix right now, and I think that’s a good thing. Over the Moon is a film based in a Chinese culture—I can’t say for sure which specific region of China this is, but it’s clearly China. I think that’s good, since there are stories from everywhere worth hearing, and representation of other people is important, too. I just wish that this one had been better.

We are introduced to Fei Fei (Brycen Lee in the first few minutes, then Cathy Ang for the rest of it) and her parents, who we will know as Ma Ma (Ruthie Ann Miles) and Ba Ba (John Cho). We’re going to get a lot of reduplicated names, by the way. There’s going to be a Nai Nai and a Ye Ye as well. Anyway, Fei Fei loves the stories her mother tells her about the moon goddess Chang’e (Phillipa Soo). According to the legend, Chang’e became an immortal and her lover was killed. She retreated to the moon, accompanied only by her friend Jade Rabbit, where she longs to be reunited for her lost love. Fei Fei chooses to believe these stories, and when her mother gets sick and dies, she believes them even harder as a way to stay connected to her mother.

Four years later, Fei Fei is about 13, but still believes in Chang’e. But her father has moved on a little and is looking to remarry a woman Fei Fei comes to know as Mrs. Zhong (Sandra Oh), who comes complete with an 8-year-old son named Chin (Robert G. Chiu). Fei Fei reacts badly to all of this and decides to build a rocket to go to the moon to prove that Chang’e is real, and off she goes with her pet rabbit, Bungie. And hey, Chin stows away, and hey, Chang’e is real, and hey, there are problems that only Fei Fei can help solve, this time with the assistance of Gobi (Ken Jeong), an exiled former helper of Chang’e.

Over the Moon ultimately has a really good message. This is a movie about letting go of the past and things we can’t change. We get that from both Fei Fei, who can’t let go of her mother and from Chang’e, who can’t let go of her lost love. It’s a valuable lesson for kids to learn (and for some adults to learn) that life comes with loss, and there will always be losses to deal with. We can dwell on those things or we can accept that the loss has happened and move forward with our lives. That’s honestly the best part of the film.

It’s the getting there that’s the problem. Over the Moon hits just about every issue I dislike in animated films designed for kids. One of the bigger problems is the fact that everything that comes up at one point in the movie plays out in another point. Fei Fei is interested in the new maglev train being built. Guess what technology she uses to go to the moon. Everything that Chin does to annoy her will come back as a thing that helps her later. Chin himself loves ping-pong; guess what the game of choice is on the moon. Literally every single thing that comes up at one point in the movie shows up in the second or third act. It’s like a series of Chekhov’s guns that get ticked off one after the other.

I’m also very disturbed by the nature of Fei Fei’s character. This is a girl who is roughly 13 after the opening scenes, and she’s still deeply involved in the belief of a moon goddess with a jade rabbit companion. I get that she does this because it connects her to her dead mother, but this is a kid who builds a spaceship on her own and who evidently knows a great deal about the moon because of this obsession, but doesn’t realize what the moon actually is. Why doesn’t she realize that Armstrong and Aldrin didn’t come back with stories of Chang’e?

There has to be a good way to get this message out to people, because Over the Moon, for the things it gets right, isn’t the way to do it.

Why to watch Over the Moon: The message is a good one.
Why not to watch: It’s so desperate to be Disney.