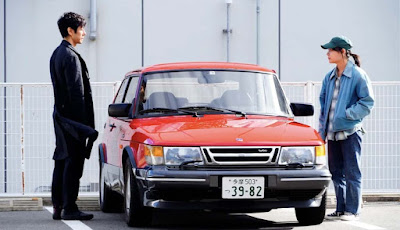 On a film nerd site like Letterboxd, it’s not a surprise when a critical darling and arthouse film like Drive My Car (or, in Anglicized katakana, Doraibu Mai Ka) comes in with 130,000 reviews at 4 stars and higher and about 325 reviews at the dreaded half star. A less artsy crowd—Rotten Tomatoes, for instance—is still overwhelmingly positive, but has user ratings at about 78%. That seems closer for this film. Sure, the audience for a slow, three-hour Japanese drama on grief is going to self-select in large part, but this is a film that moves at a snail’s pace.

We are initially introduced to Yusuke Kafuku (Hidetoshi Nishijima) and his wife Oto Kafuku (Reika Kirishima). Yusuke is a theater director and actor, and Oto is a successful screenwriter. Oto’s stories come to her during sex, and she narrates them during the sex act, asking Yusuke to remember them so she can write them down. After a performance of Waiting for Godot, she introduces her husband to Koji Takatsuki (Masaki Okada), a young actor she is working with. Yusuke eventually discovers Koji and Oto in flagrante delicto, but doesn’t tell anyone. Shortly after this, Oto dies suddenly of a cerebral hemorrhage.

Two years later, Yusuke is asked to stage a version of Chekov’s “Uncle Vanya” in Hiroshima. His process involves hiring actors who frequently speak different languages and having them perform in their own languages, meaning that people are rehearsed to death to know every beat of the play throughout. Among the cast is Koji, who Yusuke casts in the title role despite him being far younger than the character.

Because of a previous problem at this upcoming drama festival, Yusuke is prevented from driving his own car. He is given Misaki Watari (Toko Miura) as a driver. Initially reluctant to let her drive his prized car, he is eventually won over, and the two start to bond on the long drive every day to the theater. The long drive is a part of Yusuke’s process—he has a recording of his wife reading “Uncle Vanya” that he listens to so that he can continually refresh himself on the pacing. Despite his insistence of listening to the cassette every day, he and Misaki begin to trust each other and bond.

I don’t want to say a lot more, because going further would reveal some spoilers that are much better encountered in situ rather than on a blog. Suffice to say that the three characters we are going to be primarily concerned with—Yusuke, Misaki, and Koji—all have issues from their past that they are trying to work through. Yusuke has stopped acting because he feels he can no longer give himself over to his roles like that. Koji’s problems are more about self-control. We are told that he is “troubled” by a number of things, but these aren’t revealed until late in the film. Misaki is dealing with her own brand of guilt and seems to find driving a sort of therapy.

Drive My Car, if you’re not ready for it, is painfully slow. How slow is it? The opening film credits show up more than 40 minutes into the movie. They arrive at a point where you have forgotten that you didn’t see credits in the first five minutes, and when they do show up, it’s almost jarring. This is a film that, if it didn’t want to take its time on long, lingering shots, could probably have been told in half the time without too much difficulty. If you aren’t prepared for this to take the scenic route in all things and you’re not at least partially caffeinated, this is likely going to be a rough go for you.

The pace here is important, though. While this is clearly a story that could be told fast, I’m not certain it would be the same story at the end. The story needs this pace to slowly unfold, to become something that reveals exactly what these characters are experiencing, and how they are able to understand the grief and shame and guilt that they feel. But the entire thing is slowed down. No one speaks at a normal pace. Everyone speaks at a measured pace, taking long pauses between phrases or sentences. This takes some getting used to.

And yet, it is a beautiful film that needs this slow pace. It’s a cliché to say that it’s less a movie and more an experience, but that is very much the feel here. It is a film that is meditative to a fault, but it’s a meditation that plays out in multiple ways—in the long drives where Yusuke listens to his late wife reciting lines from his play, in the endless readings of Uncle Vanya around a table by Yusuke’s cast—the entire thing feels muted emotionally because to open up to all of that emotion would be too much for anyone to bear.

I understand why a lot of people would find this terribly boring, but I am not one of them. This is a film to be experienced, and every single minute of it is worth experiencing.

Why to watch Drive My Car: It feels like coming to terms with life.
Why not to watch: It is dead slow and if you’re not up for that, it’s going to be a slog.