Some 'Splainin' to Do

Film: Being the Ricardos
Format: Streaming video from Amazon Prime on Fire! 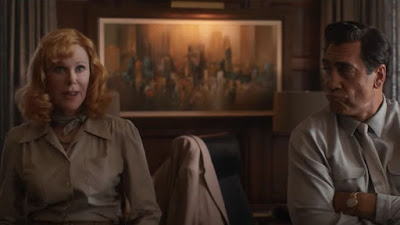 I’m slowly working my way through the Oscar movies on the list, and of them, Being the Ricardos is the one I was the least interested in at this point. Naturally, that then became the one that I needed to get through. It doesn’t hurt that it’s also one of the longest ones I had left. Since I started this blog, I’ve tried to remove longer movies when I could, almost as a sort of nervous habit just to get them done.

Why was this one I was less interested in? Two words: Nicole Kidman. I don’t really have anything against Kidman—when she’s good (as in, say, The Others), she is very good. But as Lucille Ball? This seems like terrible casting in a world where Debra Messing exists. It feels like a bit of stunt casting. As good as Kidman can be at times, she feels like a terrible choice for this. The rest of the casting is good—Javier Bardem works very well as Desi Arnaz and J.K. Simmons is perfectly cast as William Frawley. But Kidman really rubs me wrong here.

The movie essentially follows a very difficult week during the filming of I Love Lucy. There are three main problems that need to be handled over the course of the week and the show’s production. One problem is that at the start of the week, Lucy was essentially outed as being a member of the Communist Party by Walter Winchell. This is a thread that runs as an undercurrent of much of the movie. Second, Lucy has just discovered that she is pregnant, something that will have to be dealt with (assuming Lucy’s career survives the accusations), since up to this point, pregnancy is a taboo subject on a television show. Third, Lucy is concerned about her marriage. While there are rumors about Desi that she doesn’t believe (or does she?), she does feel like she is losing him to something.

And, of course, there is the normal behind-the-scenes nonsense of any workplace. William Frawley bickers constantly with his on-screen wife Vivian Vance (Nina Arianda). Lucy doesn’t like the director of the current episode and hates the blocking on many of the scenes. The two main writers of the show, Bob (Jake Lacy) and Madelyn (Alia Shawkat) bicker over who gets credit for which jokes. Vivian Vance has suddenly started losing weight which makes her something of a rival for Lucy’s attractiveness on screen.

All of these issues play out over the course of the week, along with some flashbacks to some of the principal players years later talking about this week. Of this, Linda Lavin as the older version of Madelyn is the most memorable.

The problem I have with Being the Ricardos is that I don’t find much of it very memorable. Javier Bardem is surprisingly good as Desi Arnaz/Ricky Ricardo despite being Spanish and not Cuban and not looking anything like the man he is portraying. I buy him in the role. Nina Arianda is good as Vivian Vance, and is believable in her frustrations of having an ornery, hard-drinking stage husband who is 22 years her senior. J.K. Simmons is absolutely the class of the film, inhabiting the role of William Frawley with perfection. Kidman does her best with the role; I try very hard to accept her as Lucy. I also am happy to see Alia Shawkat in this. I tend to like her work and I like her here.

So what doesn’t work? I’m not really sure. It just feels off throughout to me, as if there is something else that should be going on. Some of this is Kidman in a role that wasn’t suited for her, despite her Oscar nomination. While she is a talented actor, this isn’t a role that was meant for her, and the nomination feels more like it happened because it was “supposed to” rather than for any other reason. In a year that included Mass, Titane, The Worse Person in the World, Nightmare Alley, and Last Night in Soho, she has no business on the podium.

Some of this also needs to be laid at the feet of Aaron Sorkin. I’ve seen at least one person say that Aaron Sorkin the writer needs to fire Aaron Sorkin the director, and I think that says it more accurately than anything I could come up with. Ultimately, there’s nothing specifically wrong with Being the Ricardos except that there isn’t a great deal about it that is very much right.

Why to watch Being the Ricardos: Because Lucy was beloved.
Why not to watch: Was Nicole Kidman really the best choice here?