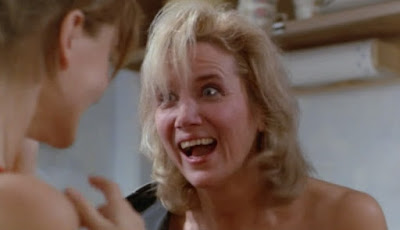 I find movies like Anna incredibly frustrating. The reason is simple: the movie contains one of the great performances of its year without question and it’s done in service of a film that doesn’t deserve it. Sally Kirkland has never been better than she is in Anna. Sadly, the film itself is little more than a sub-standard remake of All About Eve in so many ways.

Anna (Sally Kirkland) is an expatriate Czech who had a successful film career in her homeland until she was imprisoned for anti-government rhetoric. When she was released from prison, she came to the United States (back when we still had a policy of caching Czechs), where she has struggled to find any sort of acting work. Anna lives in New York and, figuring her film career is gone forever, fights for anything she can get on stage. The film opens with her auditioning for a role and potentially getting a part despite being aggressively against what she is asked to do.

Meanwhile, Krystyna (Paulina Porizkova) arrives in New York from Czechoslovakia. We learn soon enough that Krystyna is a fan of Anna’s work back in Czechoslovakia and somehow she manages to not only home in on the fact that Anna is in New York, she literally carries her various suitcases and belongings to the theater where Anna is literally auditioning for a part. Anna takes pity on the girl from her home country and suddenly she has a roommate.

What follows is what is going to be the driving force of Anna. Anna goes to her agent, happy to have gotten a part and then immediately distressed that the part she has gotten is as the understudy for the entire cast of seven women. Meanwhile, Krystyna is “discovered” by someone sitting in the agent’s office despite the fact that she speaks no English and has tragically rotten teeth. Anna’s sometime boyfriend/Czech film aficionado Daniel (Robert Fields) helps to get Krystyna ready for primetime. She gets her teeth fixed, she can suddenly carry on a conversation in English, and she is immediately the hot property in town.

I wasn’t kidding when I said that this was just a low-rent All About Eve. The plot is similar enough that it feels like they came off the same press. That’s not specifically an issue. What is an issue is that Anna feels like the NaNoWriMo rough draft version of the story where things happen just because they happen and All About Eve is carefully crafted. This is a movie that has less a plot than a series of connected events.

Here’s a case in point—for no real reason, suddenly Krystyna, speaking virtually perfect English with just a hint of an accent, is the talk of the town and is being interviewed on a New York television show. When she is asked for her backstory, well, she decides to give them Anna’s, including being imprisoned and losing a child. Why the hell would anyone do this? Even in a 1987 world where fact checking took a little more time and effort than using Google, fact checking happened. And like Anna herself wasn’t going to discover that Krystyna had decided to take her tragedies? It’s simply dumb all the way around.

And this is the tragic problem of Anna. I don’t buy into the story for a minute despite wanting to for Sally Kirkland’s sake. I really wanted to like as much as I could about this movie because I like Sally Kirkland in it. She is a compelling character, even if everyone around her is a ridiculous cardboard cutout and about as believable as a Daffy Duck cartoon.

The other issue here is just how predictable this turns out to be. You can just about predict everything that is going to happen. Do you think Anna is eventually going to get to play one of her understudy parts? How do you think that’s going to go? What do you think is going to happen with her boyfriend Daniel, content for years to do mainly nothing and live off his wealthy parents, slowly working on a book about Czech film that no one will read? Do you think he’s eventually going to start trying to become something more in an effort to be with Crystyna, who is half is age? Of course he is. And that’s going to happen not because it makes sense for the characters, but because it’s what the plot needs to have happen.

Anna is frustrating because Sally Kirkland gave her all for this and turned in a world-beating performance for a film that didn’t deserve it and for a script that didn’t deserve her. She’s the only reason to watch this, and even there she’s not enough to make me watch it a second time.

Why to watch Anna: Sally Kirkland, all day.
Why not to watch: All About Eve is better in every possible way…and easier to find.