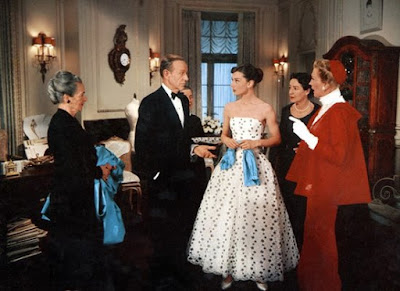 Funny Face is a movie that is going to give me agita. I like Fred Astaire; how can you not? I love Audrey Hepburn; how can you not? But who in his or her right mind would want the two of them to be romantic leads in the same movie? When Funny Face was made, Astaire was approaching 60. Audrey Hepburn was a few years short of 30. At one point in the movie, another character complains about the possible relationship—because he’s supposed to be above that sort of emotion and not because he could almost be her grandfather.

Anyway, Funny Face is one of those musicals that is really, really in the style of a classic Hollywood musical. Everyone in the film is an extreme character, and none is more extreme than Maggie Prescott (Kay Thompson). Maggie is the editor of a Vogue-style fashion magazine called Quality. Based on her behavior, she’s a good match for Anna Wintour, assuming we can believe the anecdotes in Tim Gunn’s book (and I think we can). She’s the sort of person who would walk into your house uninvited, eat your food, and complain that it wasn’t good and wasn’t what she wanted in the first place. This is not a joke; something similar to this happens in the early stages of the film.

After a musical number where she extols the virtues of the color pink, Maggie decides she wants to create something new for her readership—the idea that women with a brain would be a good thing. The problem is that their current model (Dovima) is a ditz. What to do? Put her in a more intellectual setting, naturally. The choice is made to find a Bohemian bookstore and do a photoshoot there, so off they go, locating a store run by Jo Stockton (Audrey Hepburn), a beatnik intellectual. And in reference to my comments about Maggie Prescott, the magazine crew moves in and, without permission, kicks Jo out and more or less destroys the store. Why? Because fuck you. Our photographer, Dick Avery (Fred Astaire), feels bad for Jo and tries to help her out. And later, going through the photos, he decides that Jo Stockton is the right choice to be the representation of all that is woman for Quality magazine.

Here’s another case where this is musical movie character logic and supreme entitlement. When Maggie decides that Jo will be her star model, she orders some books from the bookstore. Jo comes in to deliver them and suddenly there’s a horde of people more or less force-stripping Jo to put different clothing on her. Seriously, no wonder older generations have no fucking concept of consent.

Anyway, Dick convinces Jo that working as a model in this case will be worthwhile, since it will come with a free trip to Paris. Once in Paris, she can hunt down Professor Flostre (Michel Auclair), the founder of a school of thought called empathicalism to which she subscribes. Wacky hijinks ensue, including plenty of cases where Jo is shown as an intellectual naif who doesn’t understand that other people have responsibilities. But, it’s a musical, so we know it’s all going to work out.

Funny Face feels like a last gasp for Fred Astaire’s musical career. There’s a dance number or two, but they don’t have the same sort of joy and power of those of Astaire’s classic musicals. It feels a little sad. The man could still dance, of course, but it really does feel like sort of a victory lap more than anything else. It’s as if he couldn’t quite give up the ghost—he needed to don the tap shoes one more time.

And really, the age difference here is truly disturbing. Astaire was 29 years older than a 28-year-old Audrey Hepburn. There is no way that a romance between these two is something anyone should want to see. This is coming from someone who genuinely likes Astaire and who loves Audrey Hepburn. I said the same thing as a Cary Grant fan about Charade (Grant was 25 years older than Hepburn). Hollywood has always loved a May-December romance, but this is ridiculous and even embarrassing. There’s no way a self-respecting Fred Astaire character would legitimately attempt to court a woman half his age. I say that with full knowledge that the actual Fred Astaire did marry a woman about half his age late in life.

The truth is that Funny Face is ultimately fluffy and harmless for the most part, but it contains all of the worst aspects of musicals. The characters are pushy and rude or naïve and dippy and all of them are extreme to the point of not being believable. It’s a farce without advertising itself as such, and so in that it feels like a cheat as well. I didn’t hate it, but it’s not one I’ll watch again.

Why to watch Funny Face: You should never pass up an opportunity to see Astaire dance or Audrey Hepburn do anything.
Why not to watch: Fred Astaire was literally twice Audrey Hepburn’s age.