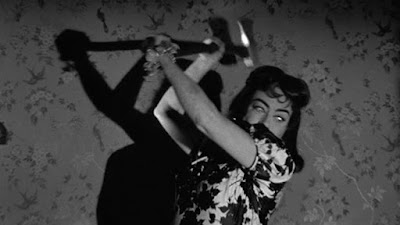 I haven’t been shy in the past about the fact that I love William Castle and love the cheesy goodness of many of his films. Castle was the king of the gimmick, having moviegoers sign waivers that held Castle and the film legally innocent if someone died of a heart attack from fright in the theater, for instance. With Strait-Jacket, he got his ultimate gimmick: a cheap slasher movie featuring Joan Crawford as an axe murderess with a screenplay written by Robert Bloch, who also wrote Psycho. Having an Oscar winner as your psychopath pretty much voids the need for seat buzzers and ghost viewers.

Strait-Jacket comes directly from the world of What Ever Happened to Baby Jane? Suddenly, older actresses, like Bette Davis and Joan Crawford, who both starred in that film, were bankable, but not really as romantic leads. This gave use the awesome little genre of hagsploitation, also known by the equally awesome name of psycho-biddy. Essentially, the genre consists of films about crazy older women, specifically women who were once glamorous and have descended into madness.

We don’t have to wait long for the madness in Strait-Jacket. Lucy Harbin (Joan Crawford) returns home from a trip a day early to find her husband (an uncredited Lee Majors in his first real role) in bed with an old girlfriend. Lucy snaps and kills them both with an axe in full view of her young daughter Carol (Vicki Cos, and eventually by Diane Baker). Lucy is dragged off to an asylum for 20 years and Carol is raised by Bill (Leif Erickson) and Emily Cutler (Rochelle Hudson). We flash forward to the end of those 20 years and Lucy’s release from the facility.

There’s a good deal of evidence right away that Lucy is still having some issues, of course. Carol does her best to integrate her mother back into society, shopping with her for clothing and even splurging on a wig to make her mother look younger and hide her gray hair. Lucy’s response to this is to feel young again in just about every way. In fact, when she meets Carol’s boyfriend/almost-fiancé Michael Fields (John Anthony Hays), it appears as if she attempts to seduce him openly in front of her daughter.

This is when her doctor (Mitchell Cox) shows up to check on her. When it’s clear that he’s going to return her to the asylum because she is still showing some signs of insanity, out comes the axe again, and the doctor loses his head. Some of this is witnessed by creepy hired hand Leo (George Kennedy), so he’s lined up for the axe in short order, too.

There’s a lot more to go into here, but I’m not going to. Strait-Jacket is just crazy enough that it needs to be experienced first-hand.

This is the kind of film for which one happily forgives its many faults. For instance, Leo’s death scene is so shoddy as to make the average amateur haunted house look professional grade. Joan Crawford plays the younger version of Lucy at the start of the film and it’s pretty clear immediately that there’s no way that she can pass for being in her mid- to late-20s. Even the casting of Mitchell Cox as the doctor is kind of ridiculous. Cox wasn’t an actor but an executive at Pepsico on whose board Crawford sat. She essentially demanded that he be given the part and because she was Joan Crawford, she got her way. And really, none of it matters.

It also doesn’t matter that in a lot of respects, screenwriter Robert Bloch mined a lot of the same territory that he did with Psycho. Oh, there are some differences here, but a lot of the plot beats are exactly the same and a lot of the plot seems to hit on the same notes. Again, it doesn’t matter. A great deal of this comes from the earnestness of director William Castle, who really just wanted to make a picture with a major star and with a screenwriter who had some chops.

But a lot of the credit for the film working at all comes from Joan Crawford herself. Crawford is, despite being in a gory (for the time) B-movie, still on the top of her game. She goes for it in scene after scene, playing the role as if she might be nominated for an Oscar. And really, who knows? Had she been in a picture with a bigger budget and with a director who had some respectability beyond the cheap-o movie roots of William Castle, she might have been.

This is a difficult movie to dislike entirely. Yeah, it’s cheap. Yeah, it’s exploitative in both the best and the worst ways. And it doesn’t matter because it features Joan Crawford swinging an axe while looking like she’s ready to murder the world. Even if the rest of the movie was crap, the first few minutes would be worth it, but the rest of it is plenty of fun, too.

Why to watch Strait-Jacket: How can you resist Joan Crawford as an axe murderess?
Why not to watch: Since it’s William Castle, it’s pretty cheap.