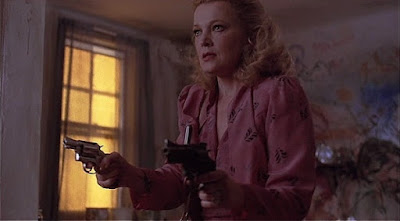 Truthfully, Gloria isn’t really that tremendous of a film, but it features that singular standout performance from Gene Rowlands as the title character. She is far and away the best part of this movie, something that writer/director John Cassavetes (who was married to Rowlands at the time) had to know on some level. The story is that his intent was never to actually direct Gloria, but once he’d written the screenplay and his wife was starring in it, he was railroaded into directing. Ironically, Gloria netted him some of his most favorable reviews.

The plot is pretty simple, really. A mob accountant named Jack Dawn (Buck Henry) has been working with the Feds to bust up the family, and now he’s targeted for a hit. Also targeted, because this is how the mob is alleged to work, is his entire family. Just as the Dawns believe that they are about to be wiped out, a knock comes on the door. Turns out that it’s Gloria, their neighbor from a nearby apartment. Thinking quickly, Jeri Dawn (Julie Carmen) tells her kids to go with Gloria. The older daughter refuses, but son Phil (John Adames) goes, and is handed his father’s book on the way out, the book containing all of the information on the mob’s accounts.

So, what’s going to happen is about what you expect. Gloria and Phil are the sort of odd couple that happens in movies like this. He’s a bit of a smartass and difficult for a seven-year-old kid and she’s a self-admitted kid hater. Naturally, they’re going to come to depend on each other. Meanwhile, the mob wants that book and, despite the fact that the kid clearly knows nothing, they want the kid dead as well. To complete the circle that makes the whole thing work, it turns out that Gloria was once the moll of the head of the mob family, so she has ties to the very people who are chasing her.

There are a lot of reasons that Gloria is worth a watch, and the start and end with the various aspects of Gena Rowlands’s performance. What makes the film work is her attitude. Gloria is a no-bullshit character. She doesn’t pretend to like Phil or to really care about him, but she feels compelled to keep him alive and take care of him. So, while we initially expect her to be on the run, hiding, and perhaps looking for someone to assist her, she very quickly realizes that she is her own first and best line of defense, and that her best defense is to be as aggressive as possible. Gloria isn’t shy about whipping out a pistol and taking shots at mobsters, even causing a massive car accident at one point.

I genuinely like just how clearly Gloria has been drawn as a character. She is absolutely not out of Central Casting. For instance, there is a specific look to her as a character—fashionable, but a little bit out of style. That’s perfectly in keeping with the personality that we’re given for Gloria. She made her living on her looks for much of her youth, and now that her youth has faded a bit, she does her best to keep up with styles and keep herself as in style as she can…and she’s just a little bit behind.

So I’ve said all of these nice things about Gene Rowlands, all of them deserved. And now I need to talk about what drove me insane with Gloria: John Adames. This is a kid that I wanted to drag out of the screen and pummel more than once. It’s not easy being a child actor, of course, and it’s always easy to point at the child actors and complain about them. This kid, though central to the film, is the biggest problem with it. I’m not alone in thinking this—Adames won a Razzie for this performance in the Golden Raspberries’ inaugural year.

The long and the short of this is that I’m happy I finally got a chance to track this down and watch it. It’s also worth saying that if this was going to get nominated for an Oscar, it got nominated for the right one. The screenplay is interesting only in how interesting Gloria is as a character. The story itself isn’t that different from movies that come out just about every year. Rowlands, though, is great, and I’m happy to have seen her performance.

Why to watch Gloria: Gena Rowlands is bad-ass.
Why not to watch: That kid.