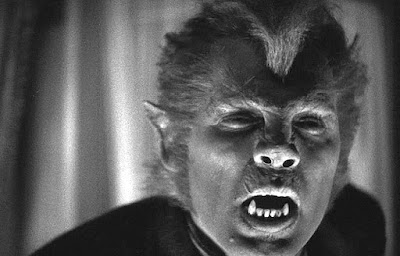 As a long-time Warren Zevon fan, I think I can be forgiven for both the title and the fact that I immediately associate Werewolf of London with St. Warren. I wasn’t exactly sure what to expect going into this one. The werewolf stories I know focus on the Lon Chaney Jr. persona, or are more modern takes like The Howling, An American Werewolf in London, and Dog Soldiers. This is an early look at the mythos, and one that is going to fly in the face of lycanthropic convention in a lot of ways. That’s okay—I don’t mind that too much when the film presents a consistent world, and perhaps surprisingly for a short little horror film from the mid-1930s, Werewolf of London does just that.

Dr. Wilfred Glendon (Henry Hill) is exploring in Tibet for a particular flowering plant. A renowned botanist, Glendon is hoping to bring it home and cultivate it. He is warned against entering a particular valley where the plant grows, but Glendon is a wealthy, white Englishman and such taboos and warnings are for others. Naturally, when he goes into the valley to find the plant, he is attacked and wounded by an unknown creature. If you guessed it was a werewolf, you’ve seen the title of the movie.

Anyway, Glendon returns home where he deals with his long-suffering wife Lisa (Valerie Hobson). It’s clear that he loves his wife, but he is also focused on his work. In this case, the plant he has brought back is said to bloom only in the moonlight, and he is working on creating a sort of artificial moonlight device in his greenhouse lab. He is also visited by a man named Dr. Yogami (Warner Oland), who claims to have met him, and who appears to be desperate for some of those flower blossoms. Meanwhile, on the domestic front, Paul Ames (Lester Matthews), one-time beau and potential fiancé of Lisa Glendon has arrived. Is this to rekindle the former romance? Is he on vacation? We’ll never really find out.

So Yogami warns Glendon about lycanthropy and insinuates that he knows Glendon is infected. And, it seems he is. Even his artificial moonlight machine seems to bring out the hair on the backs of his hands, and plucking a flower off the plant and rubbing whatever comes from the stem on his skin reverts him to his normal state. It’s not a cure, but a temporary antidote that will last through a night of the full moon. Of course, several of the blooms are stolen and Glendon transforms, causing mayhem in London and killing random women (it’s always women for some reason).

There are a lot of things that are done very well in Werewolf of London. The transformation sequences are about par for the era and would seem to have influenced what was done eventually in the Wolf Man movies of various stripe and caliber. We get something more akin to stop-motion photography, although there is one brilliant sequence where Glendon is transforming and walking past a series of pillars. As he emerges from behind each one, he is a little further along his werewolf transformation journey.

Of course a great deal of the film doesn’t make a huge amount of sense. Paul Ames buys into the concept of there being a rampant werewolf running about the town far too quickly, even for the 1930s. But really, it’s all a part of the fun. Just as much fun is the idea that Wilfred Glendon doesn’t really split out of his clothing in the way you might expect. He just sort of grows a lot of hair and fangs. He’s told that a werewolf is neither man nor wolf, but a hybrid of both, and that’s really what we’re given. He’s a human with a wolf face and hands dressed in human clothing. Odd, I know, but it works surprisingly well.

Of course, because this is from 1935, there’s not a great deal (or any) gore or real violence. Most of the violence happens off screen, and aside from near the end, we don’t really see any death on screen or even much in the way of aftermath. That’s okay—it would spoil a film like this one.

I’m happy to have seen this. It’s tame by today’s standards, but there’s a good story here and it tells it well.

Why to watch Werewolf of London: A fascinating early look at werewolf tales.
Why not to watch: There doesn’t seem to be a great deal at stake for much of it.