Shot for More or Less Shot 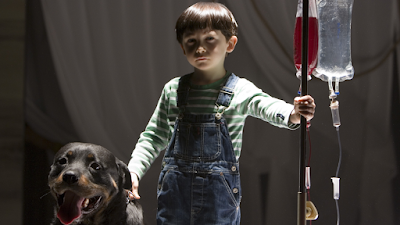 I can’t say that I was excited to see the remake of The Omen. The original, despite being included in the book “The 50 Worst Films of All Time,” is a horror classic and far better than that reputation would have you believe. There are some wonderful moments in the original version of the film, not the least of which being a decapitation specifically filmed in a way that even the people who closed their eyes would be almost forced to see it. Remakes of classics don’t tend to go over well. It always raises the question of why bother when the original is so good.

Actually, that’s kind of unfair. This version of The Omen is pretty good. The problem is that it’s not pretty good if you’ve seen the original from the 1970s. The story is virtually identical, beat for beat and scene for scene. In fact, the writer listed for this version of the film is the same as the first version. I suspect that they used the same screenplay, or at least the same script. So, if the script is essentially the same, why is this version so much lesser than the original?

Bluntly, it’s the cast. This is not to denigrate the cast of this version of The Omen, because it’s a good one. The problem is that in virtually every case, it’s a step backwards. There are a couple of exceptions, but for the most part, the original is superior. Consider the following changes in casting:

Ambassador Robert Thorn—Liev Schreiber vs. Gregory Peck. Schreiber is a fine actor, but he’s no Gregory Peck.
Thorn’s wife Katherine—Julia Stiles vs. Lee Remick. Again, I have nothing against Julia Stiles. I think she’s often a better actor than she’s given credit for, but she’s not Lee Remick.
Bugenhagen—Michael Gambon vs. Leo McKern. Gambon is a fine actor, but Leo McKern is a damn legend in odd little roles like this one.
Photographer Keith Jennings—David Thewlis vs. David Warner. I genuinely like David Thewlis. He should get more and better roles. But David Warner is one of those guys who was a mainstay of ‘70s villainy, and seeing him in a good guy role is fantastic.
Father Brennan—Pete Postlethwaite vs. Patrick Troughton. Let’s call this a push.

The only place where there’s a clear up grade in the remake is in the character of the nanny. The original had Billie Whitelaw while the remake has Mia Farrow. And here’s the thing—Mia Farrow is hard to top in anything, but Whitelaw is only a step behind her in this role.

Again, I want to make it clear that I like the cast of the remake. I like every actor that I have named here. But I have to wonder what the point of this film was. It’s not unlike the shot-for-shot remake of Psycho that happened. What was the point of that? Even when there are some interesting improvements in this version (like what happens to the photographer), it still feels completely unnecessary. If you haven’t seen The Omen, this is a fine version to watch. There’s nothing wrong with it. If you have seen the original, though, there is literally no clear reason that this would interest you. It’s the same movie, and not quite as good.

Why to watch The Omen (2006): It’s a creditable version of the original.
Why not to watch: It’s a step backwards in almost every role.

Posted by SJHoneywell at 5:55 PM