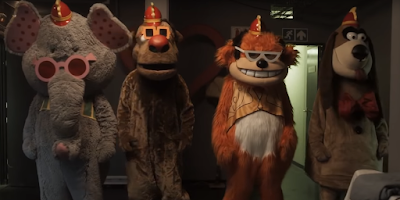 Sometimes you just know what you’re going to end up doing with your night. Like I do a lot of days, I went to the library today, in this case to return a few things. When I walked by the display of new movies, I saw The Banana Splits Movie on the new acquires shelf. When I actually looked at it, I realized this was not a kids’ movie; this is an R-rated horror movie featuring the Banana Splits characters from the old television show as the killers. I knew immediately that I had to see it.

I won’t say that I grew up on the old television show, but by the time I was cognizant of such things, it was in regular repeats and reruns, so I’d seen a few episodes. At least I’d seen enough episodes to know the names of the four characters (Fleagle, Bingo, Drooper, and Snorky) and to know the theme song.

The basic premise of the movie is that the Banana Splits is still a going concern, multiple decades after it was first created. Young Harley (Finlay Wojtak-Hissong) is a nerdy kid who still loves the show. This is kind of the equivalent of a kind in third or fourth grade still being really into Blue’s Clues or Dora. Harley doesn’t have a ton of friends, but for his birthday, his mom (Dani Kind) has arranged for Harley, his brother Austin (Romeo Carere), her husband (Steve Lund), who is Harley’s dad and Austin’s step-dad, and Harley’s friend Zoe (Maria Nash) to attend a taping of the show.

On the surface, everything seems normal. In addition to our family and friend, we’re introduced to a few other people. These include Thadd (Kiroshan Naidoo) and Poppy (Celina Martin), a couple of superfans who are attempting to livestream their show visit and Jonathan (Keeno Lee Hector) and Parker (Lia Sachs), a father-daughter duo desperate to make Parker a star. We also meet the people involved in the show. There’s Stevie (Richard White), the human co-host who acts opposite the four animatronic Splits (all of whom are voiced by Eric Bauza); Paige (Naledi Majola), the show’s page and long-suffering servant; Karl (Lionel Newton), the Splits’ creator; Rebecca (Sara Canning), the show’s producer; and Andy (Daniel Fox), the new vice president at the network.

The entire premise of the movie is that just before the taping of the show, Andy tells Rebecca that he is cancelling the show despite it still being a hit because he wants to take the network in a different direction. As it happens, one of the animatronics is being repaired at the time and hears that the show has been cancelled. That news turns him and the rest of the Splits instantly murderous. When the taping is done and our three groups of viewers are invited backstage, all hell starts to break loose.

I love the premise. It’s daring to take something that was purely innocent back in the day (and the Banana Splits were entirely safe and innocent for kids of any age) and turn it into something horrific and murderous. Where I fear this has gone wrong is that it has gone far too much in that direction. There’s a lot of completely gratuitous gore in this that absolutely doesn’t need to be here. It’s not fun splatter, either. This is at least in part supposed to be a comedy, so the gore seems unnecessary, a shock for the sake of it.

And so, I’m a bit torn on this. The concept of this is absolutely fantastic, but, and this is a surprising thing for me to say, it goes too far. Normally, films don’t go far enough with the premise and punk out. The Banana Splits Movie tries far too much to make this an actual horror movie rather than just having fun with the premise. It’s actually too dark for what it is, and yes, I’m surprised that I just wrote that.

Why to watch The Banana Splits Movie: It’s the craziest premise for a movie in years.
Why not to watch: It’s far more violent than it needs to be to make the point.