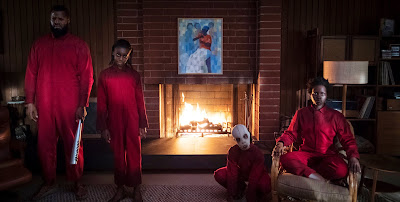 A couple of days ago, I looked at the Original Screenplay race from 2017 and I put winner Get Out and screenwriter Jordan Peele in fourth place. I admitted then and will admit now that that placement does bother me a little, because Peele is a talented screenwriter and he has a great deal to say. I’m pleased that he’s won an Oscar, though, because he well may not win another. Peele seems to be dedicated now to working in genre film, something Oscar typically turns up its nose at. That being the case, Peele will get plenty of acclaim from fans, but little from his peers. It’s a damn shame, too, because while I don’t think Us is as good a movie as Get Out, it’s a much better (and much more original) screenplay.

It’s also a difficult movie to describe to any depth without giving away the game. We start in the mid-1980s with a family on vacation in Santa Cruz. While on the boardwalk, young Adelaide (Madison Curry) wanders into a funhouse where she meets something like a double of herself in the mirror maze. Jump to the modern day and Adelaide (now Lupito Nyong’o) is married to Gabe (Winston Duke). They, along with their two kids, Zora (Shahadi Wright Joseph) and Jason (Evan Alex) are heading to their large summer house in, well, Santa Cruz. Everything seems normal, at least at first.

That night, though, things get very strange, and strange soon turns to deadly. The house loses power and suddenly, a group of four people appear on the driveway. These people are dressed in identical red jumpsuits, and in a few moments have broken into the house and attacked the family. It is soon evident that they are not merely attackers—they are doppelgangers of the family. Only Adelaide’s duplicate can talk, and she tells a tale that is quickly realized to be not metaphor or fairy tale, but her version of the truth. Essentially, she is Adelaide’s duplicate. What happens to Adelaide happens to her, but she has no control over this. Adelaide marries Gabe, the counterpart is forced to pair with Gabe’s duplicate, Abraham. Adelaide has a child, and so does the duplicate. Now, it appears, the duplicates are keen to take their place in the real world.

It’s a little bit too complicated for a high concept. It’s also a blending of themes, much like Get Out. Interestingly, there is very much a theme of being replaced here, which is a big part of Peele’s first film. The racial overtones have been removed here, though, because the replacement of people by their doppelgangers appears to be something happening country-wide. There is a feel to this movie similar in a lot of ways to Invasion of the Body Snatchers, but with a much more conspiratorial air rather than it coming from outer space.

For all that Us touches on the some of the same themes as Get Out and for as much as it owes a huge debt of gratitude to Body Snatchers, this is a much more original movie than Peele’s first. We’ve seen some of these ideas before, but they are presented here in a completely new way. The doppelgangers are not pod people in any real way other than metaphorically, but they function the same way. The biggest difference is that they don’t cause their originals to turn to dust and blow away peacefully. No, these creatures are bet on killing their real world doubles by any means necessary. Since each one carries a giant pair of shears, I can imagine how this might happen.

So why won’t this get nominated for an Oscar? Well, in truth, it might (and we’ll know before the end of January. But I doubt it will for several reasons. The first, mentioned above, is that this is a genre film, and Oscar hates genre. The more important reason (at least per the Academy) is that while our main characters are black, this is not a movie about racism, at least not overtly. Oscar loves to reward itself for being woke, so while Peele deserves more recognition for this screenplay’s originality, he won’t get it from the Academy.

What I like about this is how straightforward it ends up being. Once the basic plot is established, Us is a steamroller going from one end to the other without any real deviations or breaks. Instead, it plays out that plot to its logical conclusion, giving us a twist or two along the way. A great deal is left unexplained, which is only fair, but it does make the film feel unfinished in particular ways. It’s not—and I don’t want to imply that—but because we end the film with gaps in our knowledge, it feels that way. This is also true because of some unexplained behavior of the doppelgangers.

So, ultimately, I don’t think it’s as good a movie as Get Out, but it’s more worthy of praise in some areas.

Why to watch Us: It touches on some of the same ideas as Get Out, but in much more interesting ways.
Why not to watch: It’s not as satisfying an experience as Get Out.