Off Script: The Addams Family 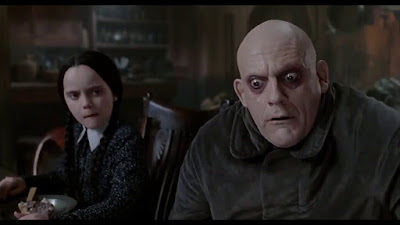 I’m just going to cut to the chase here and say that I really, really like The Addams Family and get that out of the way. There’s a lot here to love, not the least of which being the connection to both the original comics and the old black-and-white television show. It’s an update, though, and in being updated, it’s been made both darker and funnier. In the television show, the Addamses were always a touch malevolent, but in the movie, they are openly homicidal (but always in a fun way). There’s a sense of funhouse danger with the Addamses, as if they’re just having fun, but that their brand of fun includes lighthearted attempts to kill each other or guests.

This is also a movie that is so perfectly cast that it’s impossible to find complaint with it. Admittedly, Judith Malina was replaced as Grandmama by the always-adorably entertaining Carol Kane and Jimmy Workman, who played Pugsley, hasn’t done much outside of these films, but there’s a lot to praise in the casting otherwise. This movie and its sequel were the movies that made the career of Christina Ricci (who played Wednesday), and it’s always nice to see Dan Hedaya and Carel Struycken, but I’m talking specifically about the three main characters here.

First, Christopher Lloyd is a perfect Fester. He always comes across as just a little odd in any role he plays, and for Fester Addams, that’s exactly what is needed. I mean, you could get someone like Crispin Glover to play Fester, but it would be a very different take on the character. Lloyd’s take fits in exactly as it should—vaguely malevolent, but always in a way that seems good-hearted and entertaining. But it’s Anjelica Huston and Raul Julia as Morticia and Gomez Addams respectively that steal every scene they are in.

Anjelica Huston is a flawless Morticia. She delivers lines that drip with potential malice with such seeming innocence that listening to her talk about the family motto or seeing her watch her children electrocute each other is such a simple and basic joy. It’s a case where no one could play this role in the same way or with the same perfection. For his part, Raul Julia was born to play Gomez Addams. He is bombastic and joyfully vicious, pleased to see and welcome anyone to his home and just as pleased to attempt to skewer that visitor with a sword. It’s not a joke to say that I know a number of people who consider Gomez and Morticia to be an ideal relationship—and that it’s this version of the couple that they are referencing.

I normally talk about plot in this reviews, and I’ve written close to 500 words without touching on it. My guess is that most of the people reading this blog have seen The Addams Family multiple times, or at least once. That said, a quick summary is worthwhile. What we learn is that Fester Addams, the brother of Gomez, disappeared 25 years ago, and that the family holds a séance every year on the anniversary of his disappearance. At the same time, the Addams laywer Tully Alford (Dan Hedaya) finds himself on the business end of a vicious loanshark (Elizabeth Wilson) and her adopted son Gordon (Christopher Lloyd). Desperate, Tully notices that Gordon bears a strong resemblance to the portrait of Fester and concocts a plan—have Gordon show up as Fester during the séance, and then have him discover the way to the family vault and run off with the treasure.

It’s a simply plot, and while the movie is absolutely about this plot from start to finish, a great deal of the movie is simply giving the characters space to move around in. Many of the scenes and asides are there just to develop either the characters, the unique perspective of the Addamses, or both. Seeing Morticia take a small knife away from Wednesday (“Is that for your brother?”) and hand her a much, much larger one is exactly the sort of thing that establishes the oeuvre of The Addams Family. It takes five seconds (if that), but demonstrates so much of the world, and the way the characters work. It’s these little moments that make the movie work.

Why to watch The Addams Family: Few movies can boast a more perfectly designed cast.
Why not to watch: It’s a rare case where the sequel is better.