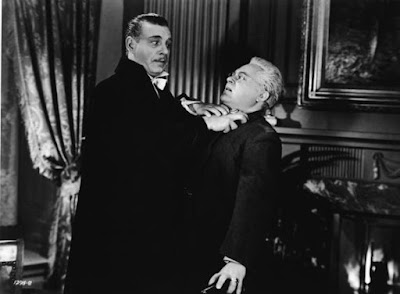 Dracula films are sort of their own thing, at least when you’re dealing with the classic Universal films. I’ve seen most of them at this point, and of all of them, Son of Dracula might well be the darkest of them. One of the rules of monster films from this era was that the monster always had to die in the end. Traditionally, this meant that Drac met his end by sunlight or stake (or, more obscurely, running water or something similar) but everyone else aside from minor characters pulled through. Son of Dracula is darker in just about every way it can be.

I’m not going to be too extensive on the plot here. Essentially, a Count “Alucard” (Lon Chaney Jr.) shows up in Louisiana, having been invited by Katherine Caldwell (Louise Allbritton), the daughter of a scion of the community. Since Alucard’s arrival, Louise has been distant from Frank Stanley (Robert Paige), her fiancé. The reason is simple and obvious: she has fallen under the spell of Alucard. And, obvious to just about anybody who isn’t actually a character in the film, Alucard is Dracula spelled backwards, which explains exactly why Katherine is enamored of him.

Eventually, Alucard/Dracula convinces Katherine to marry him, promising an eternal future together. Frank has followed them but doesn’t see the marriage. Finally confronting them and discovering what Katherine has done, he attempts to kill Alucard by shooting him. In a strange shift from vampire lore, the bullets actually go through him and strike Katherine, killing her. Frank is naturally despondent and goes a bit crazy, turning himself in to the police. Family friend Dr. Brewster (Frank Craven) goes to her house and sees her evidently alive, but returns during the day and finds her in a coffin, dead. Enlisting the help of Professor Lazlo (J. Edward Bromberg), the two decide what to do about Dracula. Meanwhile, Frank has turned himself in to the police, but is visited in his cell by the now-vampiric Katherine.

I’m not going to tell you how this turns out, but it’s a downer followed by a downer, and I love that the film goes here. Honestly, we shouldn’t be getting a lot of happy endings from vampire movies. Vampires should be creatures that destroy everything they touch, even when they are destroyed themselves.

It’s also a film that uses the talents of Robert Siodmak very well. I often like a lot of Siodmak’s films. There was a level of grit to his movies, a sort of real-world lack of polish that wanted things to be closer to reality than movies of the period often were. Sidomak also managed to arrange for some very interesting effects. Unlike many films of the era where the transformation of vampire into alternate form was cheesy and tended to end up as a rubber bat on an obvious string, we get a great transformation here when Katherine turns into smoke to move through the bars of Frank’s jail cell.

In fact, the biggest problem with Son of Dracula is Lon Chaney Jr. himself. I like Chaney Jr. well enough when he’s in an appropriate role. Whenever he plays Larry Talbot, I find myself liking him quite a bit. He’s sympathetic when he plays that sort of hard luck loser who deserves better than he’s gotten. Chaney really on works when he’s pitiable, and there’s nothing pitiable about Count Dracula.

Other than that, though, this was entirely entertaining. Surprisingly so, in fact. For as little as I expected of this, it’s a film I would happily watch again.

Why to watch Son of Dracula: It’s almost modern in how dark it gets.
Why not to watch: Lon Chaney Jr. is a terrible choice for Dracula.