Clowns to the Left of Me 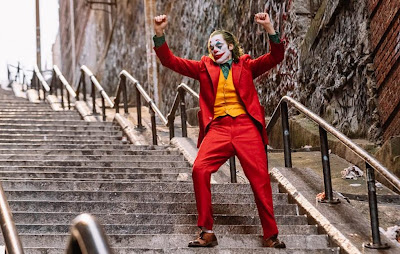 I try very hard not to read reviews of movies I haven’t seen. That’s especially true of movies that I know or assume will eventually show up on this blog. What this means is that I have no idea of what I’m about to say about Joker is a completely new take on the film or one that is the most common take on it. I honestly have no clue of I’m either off my meds or just repeating something everyone else has already said.

Now that I’ve said that, I also need to say this—you can consider everything after this paragraph to be potentially in spoiler territory. To discuss the film the way I want to and in the sort of detail I think I need to, I almost certainly have to go places that would be otherwise considered spoiler. I’m doing so after this second paragraph because this is where I typically include the “more” break, so if you don’t want the spoilers, just don’t click through.

So, even if you haven’t seen Joker at this point, you’ve almost certainly heard all about it. It has been both touted as being the latest film to accurately depict the malaise of our time and as a screed either explaining or defending incel culture. Certainly it was immediately embraced by the incel part of comic book fandom, with Joker becoming an immediate favorite of everyone party to, as an SNL skit put it, white male rage.

I’ll run through the plot quickly. Arthur Fleck (Joaquin Phoenix) is a clown, and not a very successful one. We see him working as a sign spinner at a store going out of business when he is attacked by a gang of kids that steal his sign. He chases them down, whereupon they beat him and break the sign. Later, Arthur is called on the carpet by his boss, essentially a low-rent talent agent for clowns, about his own dereliction of duty in losing the sign and running off. Arthur lives in a rundown apartment building in Gotham with his mother Penny (Frances Conroy), who isn’t quite all there. Penny writes frequent letters to her old employer, Thomas Wayne (Brett Cullen), and is convinced that Wayne is actually Arthur’s father.

As for Arthur, he attempts stand-up comedy, but a condition that causes him to laugh uncontrollably gets in the way. His performance is disastrous, and he is eventually featured on a Gotham late-night show hosted by Murray Franklin (Robert De Niro), of whom Arthur and his mother are fans. The clips of Arthur’s disastrous performance are, of course, embarrassing, and Murray is showing them as a sort of public shaming. It’s the late night talk show equivalent of people who go viral for something embarrassing.

But what’s going to really set things up are the following things: Arthur’s budding relationship with his neighbor Sophie (Zazie Betts), his realization of just how deeply disturbed his mother is, the loss of funds for the program where he gets his therapy and medication leaves him without support, and, finally the brutal slaying of three men who attack him in the subway. All three men are Wayne Enterprises employees, and, while drunk, they attack Arthur. He responds by shooting two, and then tracking down the third and executing him as well. The slayings become the story around the city, and the people of Gotham start to react violently when Thomas Wayne, disgusted by these events, calls the people starting to riot clowns (since Arthur was in his clown makeup for the killings) and beings a run for mayor.

Ultimately, I think there are two ways to look at Joker.

The first way is, I think, the more likely way to look at it. That is that what we are given on screen is exactly what is depicted on screen. Arthur is someone who is completely beaten up by life, but fights back in one telling moment. From that moment on, Arthur, while still unknown and behind the clown white, is suddenly noticed. People are inspired by his actions. The riots starting to happen around Gotham are happening, if not on his behalf or at his request, because of what he has done.

If this is the way that we are supposed to view Joker, I understand every bit of anger directed toward it, because this is absolutely the reading that would make every sexless incel as happy as he could possibly be.

An honest, if unkind reading of incels is that they feel life has treated them unfairly. Women aren’t interested in them no matter how nice they might be. Success seems to elude them at every turn. No one considers their opinion important. No one looks up to them. Joker, thus, is not an everyman, but an everyincel. He is unimportant and broken by a world that is made for other people and doesn’t care about him. Here’s the unkind part—subconsciously, the problem your average incel has isn’t that the world treats him this way, it’s that he’s treated this way when he has all of the advantages going in. He’s male, typically white, typically from a household with a decent enough income that he hasn’t suffered any real privation. He’s generally not dumb, but is socially awkward. He’s hetereosexual. In short, he’s living in a society that is geared toward cis/het white males, and he’s still a loser. Even with the entire deck stacked his way, he’s a loser. No wonder Arthur Fleck is his patron saint and Joker is his church.

But there is another way to see this. We know from multiple instances in the film that Arthur, through whose eyes we see the film, is an unreliable narrator. His budding relationship with Sophie isn’t real, for instance. It’s all fantasy. We know he is under therapeutic care and on medication, which he loses. So how much of the rest of this is fantasy? In this reading, since the film more or less sets up the origin story of Batman, we need to include the death of Thomas Wayne, which means the subway killings are almost certainly real. But who is to say that Arthur had to be the one pulling the trigger? It’s entirely possible that all of this is just Arthur’s own insane fever dream, especially since the film ends with him under psychiatric care at Arkham.

If that’s the reading of the film, then Joker is brilliant.

Anyway, Joaquin Phoenix has earned an Oscar about four times in the past, so it’s nice that he got one for what is ultimately a very good performance, even if he deserved one for Her or The Master more than he did for this.

Why to watch Joker: Joaquin Phoenix has needed an Oscar for a long time.
Why not to watch: You certainly already know the “white male rage” reasons for this.