The Hole in the Donut 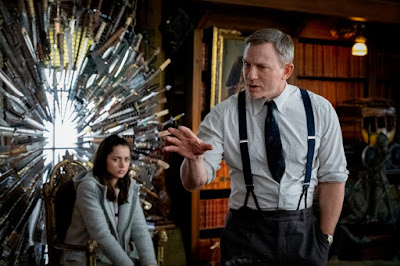 A couple of weeks ago, fellow movie nerd, bad film aficionado, and all-around mensch Jason Soto purchased a copy of Knives Out and offered the electronic version to anyone who wanted it, so I claimed it. It took me a little while to get to actually claiming the electronic copy, but now I have, and I set about to watching the movie with a will. I’m so happy I did. Of all the movies on my Oscar list from 2019, Knives Out is one that I really wanted to see in the theater. Then again, since I pretty much never see anything in the theater, I knew I wouldn’t, but would want to see it as soon as I could.

Knives Out is an Agatha Christie-style murder mystery. We’ve got a big house, a dead body that looks like a suicide, conniving relatives all desperate for a reading of the will, and everyone in the house having a motive. True to the form, we’ve also got a gentleman detective, in this case a Southern gentleman named Benoit Blanc (Daniel Craig), who has been called in to investigate what looks like a clear case of suicide, hired by an unknown party via a thick envelope of cash.

There are a couple of things that make Knives Out a lot of fun. The first is the absolutely dynamite cast. Our dead body is Harlan Thrombey (Christopher Plummer), a wildly successful mystery author, found dead the morning after his 85th birthday party. His family includes daughter Linda (Jamie Lee Curtis), her husband Richard (Don Johnson), and son Ransom (Chris Evans); daughter-in-law Joni (Toni Collette) and her daughter Meg (Katherine Langford); and younger son Walt (Michael Shannon). There are a few other assorted family members here—Walt’s wife and son, for instance—who are not really plot-essential. There’s also Harlan’s ancient mother Wanetta (K Callan). Unrelated to the family are housekeeper Fran (Edi Patterson), Harlan’s nurse Marta (Ana de Armas), and investigating officers Lieutenant Elliott (LaKeith Stanfield) and Trooper Wagner (Noah Segan). For good measure, we also get a scene with the house groundskeeper, played by the great M. Emmet Walsh. Seriously, this is a cast list to kill for, pun fully intended.

A write-up like this one cannot fully address the intricacies of the characters and their relationships. Suffice it to say that many of them (but not all) have their reasons for wanting Harlan bumped off. He’s got evidence that son-in-law Richard is cheating on Linda. He’s planning on firing Walt from running his publishing house. He’s going to cut Joni off since he has evidence that she’s been double-dipping on the tuition he pays for her daughter. And he had a loud fight with Ransom the night of the party. So when he turns up dead, it’s suspicious. It’s even more suspicious when his death is clearly a suicide.

In truth, the method of Harlan’s death becomes evident about half an hour in, but I’m not going to spoil it here. We know exactly the circumstances surrounding his death early on in the film, with the rest of it more or less being the playing out of all of the plots that intertwine to get us the death in the first place. Knives Out is a clever film, one that doesn’t underestimate the intelligence of its characters. More importantly, it doesn’t underestimate the intelligence of its audience. It wants us to follow along and understand what is happening without knowing exactly where things are going to end up.

In fact, there is only a single issue here that gives me pause: the particular quirk we are given about nurse Marta. Marta, it turns out, has an inability to lie. If she lies, she vomits. I get that that makes her a unique character as well as an absolute perfect person for someone investigating a murder, but it seems like such a frankly dumb character trait. It’s extreme to the point of silliness, and for a movie that is otherwise this smart, a bit of a cop-out.

The real star here, though, is the person of Benoit Blanc. Daniel Craig has said that the next James Bond film is going to be his last in the role, so I hope that he starts doing one of these every 12-18 months. Really smart detectives are fun characters, and Blanc has a lot going for him. He’s smart, but not obscenely smart like Hercule Poirot or Sherlock Holmes. He’s also got that Southern-fried accent that just makes his investigations that much more genteel. We need a good detective character in the canon—someone new and modern—and Blanc could well be it.

While the character trait of Marta is the film’s biggest weakness, it’s also the film’s only real weakness. It would be tempting, for instance, to paint the entire collected Thrombey clan as being terrible, selfish people. Truthfully, most of them are, but not all of them. The film is smarter than that. It’s also interestingly political. How interesting is it that the one character who cannot lie and who is routinely shown as being a genuinely good person is a South American immigrant whose mother is undocumented?

I hope Rian Johnson does more of these, and I hope they all make a lot of money so that he continues to make them for the next 30 years.

Why to watch Knives Out: This is what Agatha Christie would be writing today.
Why not to watch: That one character quirk is a little hard to stomach (pun fully intended).