Kids Will Be Kids 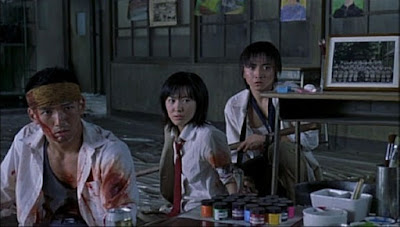 When you have a good idea, it’s inevitable that someone will more or less duplicate it. Several years ago, you couldn’t go anywhere without walking face-first into something connected to The Hunger Games, either books or movies. Since it was such a huge hit in pretty much every medium, it’s the one people are going to know, so when they come across Battle Royale (or Batoru Rowaiaru if you want the anglicized Japanese), many are likely to see this more original story as derivative.

I’m not sure what it is about the collapse of civilization that makes people think that the natural human reaction is to hold contests where kids kill each other, but there it is: Battle Royale is one of those stories where kids kill each other at the behest of a government that has decided for some reason that this fits into their world view. We’re told that the “BR Act” was created to help control unruly youth; the upshot is that every year, one class of students is taken to a remote location.

Once there, our young group (there are 42 of them in this story) are each given a little bit of food, a weapon or special item, and are fitted with a collar that tracks them. This collar will explode under certain conditions, including attempted removal. The kids then have three days to kill each other off, with the last one alive being allowed to live. The weapons they are given vary in usefulness. Some get firearms while others get non-weapon items like a megaphone, a tracking device, or a bullet-proof vest.

Naturally, with 42 kids looking to kill each other and 41 that need to die, there’s not going to be a great deal of time for a lot of character development for many of our players. A couple are going to die before the entire process starts as examples. Others will kill themselves shortly after the “festivities” begin. Much as The Hunger Games would duplicate, there’s a romance or two going on here. In this case, our star-crossed romance concerns Shuya Nanahara (Tatsuya Fujiwara) and Noriko Nakagawa (Aki Maeda). These two are ultimately assisted by Shogo Kawada (Taro Yamamoto), who survived a previous Battle Royale and wants to avenge his dead girlfriend.

Standing in the way of the survival of the aforementioned characters are Kazuo Kiriyama (Masanobu Ando), who ultimately has the most kills in the battle. Kiriyama appears to have no compunction against killing and no remorse, even for killing his friends. Also on the darker side of the coin is Mitsuko Souma (Ko Shibasaki), beautiful on the outside and dead on the inside due to vast amounts of physical and sexual abuse in her childhood at the hands of her stepfather. She is perhaps the most well-known of the characters in the sense that her received weapon is a sickle-like kama, something that seems to be a symbol of the movie.

Also in the mix is Kitano (“Beat” Takeshi Kitano), the former teacher of the students who arrives with them to more or less lead them through the Battle Royale process. It is he who gets them to kill each other, to understand the rules, and, ultimately, to crown a winner.

I have truly mixed feelings about Battle Royale. I love the idea, and that may be the answer as to why so many apocalyptic visions include children killing each other or being thrown into some hellish contest where they must fight for their lives. It presages not only The Hunger Games, but it contains traces of The Lord of the Flies as well as Stephen King/Richard Bachman’s The Long Walk. It’s compelling on its face, and so that means a lot of the odd plot holes and pieces of confusion are easy to gloss over. Like, these are kids who are supposed to be in middle school, yet they all look in their late teens.

It honestly feels like it should have been longer, like it would have made more sense as something like a mini-series rather than a stand-alone film. With more time, we’d have more opportunity to know the characters and more opportunity to genuinely care about them when they are inevitably killed. Give this 5-7 episodes, and we’ve got much more emotionally at stake in what happens, and the unescapable deaths are that much more meaningful.

That really is my only knock against this film. Despite clocking in at just over two hours, the vast number of characters means that most of them get very short shrift rather than the full treatment it almost certainly deserves. Movies aren’t always the right vehicle for a story, and in this case, it creates a few problems better solved with multiple episodes.

Why to watch Battle Royale: Takes the “children murdering each other” from The Lord of the Flies to the next level.
Why not to watch: No character development.