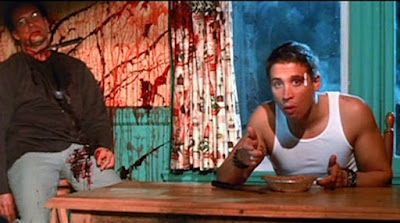 It’s fun, sometimes, to see people at odd points in their careers. Dead & Breakfast from 2004 is a case in point. This weird little indie features performances from, among others, Jeremy Sisto, David Carradine, Diedrich Bader, and Jeffrey Dean Morgan. Since this is a weird little indie horror comedy, it’s kind of a surprising cast.

And this is a weird little horror comedy. A group of six people, Christian (Sisto), David (Erik Palladino), Kate (Bianca Lawson), Johnny (Oz Perkins), Melody (Gina Philips), and Sara (Ever Carradine, who is David Carradine’s niece). They are headed to Galveston for the wedding of a friend, but have managed to get lost. They end up, of course, in a tiny little town where, because that’s what the genre is, terrible things are about to happen.

I’ll give you the quick and dirty. The six end up in a bed and breakfast run by Mr. Wise (David Carradine), assisted by his chef Henri (Diedrich Bader). There’s also a drifter (Brent David Fraser) wandering through town, evidently with some sort of agenda. What we soon discover is that Mr. Wise has a mystic box that we learn houses the soul of his own dead child. This box gives him a certain amount of power, provided it never has the spell it is wrapped in removed and opened. Whoever opens it will become possessed by the spirit and start a murder spree. Worse, any person who has a body part (hair, blood, etc.) placed in the box will become possessed.

I should not have to tell you that one of our visitors (Johnny in this case) accidentally opens the box, becomes possessed, and starts killing people and using the box to possess others.

Dead & Breakfast provides us at least with a unique view of zombies. Our possessed people in this film are in some ways clearly inspired by Romero’s films. The only way to effectively kill them is decapitation or destroying the brain. However, they don’t really seem to want to eat anyone. They’re slower than normal, but are really more like voodoo zombies in how they behave. Johnny, as the first one possessed, retains all of his faculties. He can talk, use tools, even crack jokes.

The issue with Dead & Breakfast is exactly what you think it’s going to be—it’s not nearly as funny as it thinks it is. Like most horror comedies, it really does go for the comedy part of things in terms of focus. Also like many horror comedies, rather than trying to be truly scary, it instead goes for the gross-out, giving us splattered heads, blood, and more. In truth, it’s not very funny and not particularly scary. I suppose it’s funny enough in the sense that unlike most horror comedies it doesn’t specifically go for slapstick or the lowest of lowbrow humor. I never laughed out loud at it, but I was also relatively entertained by it.

That said, it’s disappointing that the bar here is so depressingly low. My expectations for horror comedies are so low in general that I end up liking any of them that don’t actively offend my intelligence. In a better world than this one, Dead & Breakfast would be completely forgettable as a movie instead of being a horror/comedy that I can almost recommend for having a few original ideas and not being completely a waste of everyone’s time.

Sadly, I think this is what the subgenre has come to more or less. Aside from a few classics like Shaun of the Dead and Slither, the best we can hope for is mildly funny, a few gross outs and something that doesn’t overtly insult us. I had more hopes here.

But while we’re here, I think it’s worth talking about just how far some people will evidently go to see themselves on somebody’s movie poster or DVD box. The pull quote from Ain’t It Cool News for this movie is something to the effect of this being America’s answer to Shaun of the Dead. If that’s the case, America should officially give up making movies permanently and let the Brits take over. If this is the best we can do as a response to that, we’re in really terrible shape.

Why to watch Dead & Breakfast: It absolutely goes for it, whatever it may be.
Why not to watch: Like most horror comedies, it’s not as funny as it thinks it is.