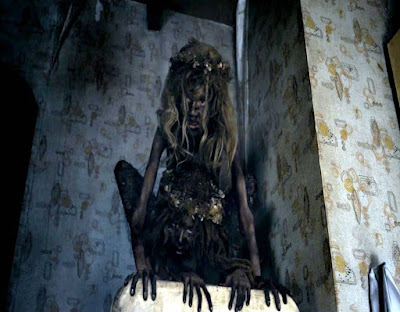 Mama is one of those movies that I’ve wanted to watch for some time but have never pulled the trigger on until now. I’m not entirely sure why this is the case. Its executive producer was Guillermo del Toro, and he’s got something close to a magic touch as far as I’m concerned, so this should be a move that I should love. And yet, I think part of the reason I haven’t been truly excited to watch is that I haven’t heard a lot of people raving about it.

The quick wrap-up is that the movie starts with the economic crash in 2008. A broker (Nikolaj Coster-Waldau) has killed a couple of his partners and then murders his estranged ex-wife. He scoops up his two young daughters and drives off, too fast for the weather and eventually slides off the road. There’s a cabin nearby, and he takes the girls into it, planning on killing them and then himself. Before is does, though, he swept up by some unseen thing that kills him and protects the two girls.

Jump ahead a few years, and in the film’s present, Lucas Desange (also Coster-Waldau), the twin brother of the man from the film’s opening, has not given up hope of finding his nieces, something in which he is supported by his hard-living rock and roll girlfriend Annabel (Jessica Chastain). So, when a search party suddenly finds the long-lost car of Lucas’s brother, and then finds the two girls, now older and completely feral in a nearby cabin, Lucas and Annabel are suddenly given much more than they expected. This is especially true for Annabel who is clearly shown being thankful at going another month without being pregnant.

The girls make progress slowly at first, but the older Victoria (Megan Charpentier) has retained some of her language skills and adapts quickly once she is given glasses to allow her to see clearly. Younger sibling Lily (Isabelle Nelisse) was abandoned while still essentially an infant, and thus has virtually no language skills. Through the work of Gerald Dreyfuss (Daniel Kash), the girls make more progress and Victoria speaks of “Mama,” who she claims has acted as their protector and provider.

A custody battle ensues, and Lucas and Annabel win thanks to the support of Dreyfuss, who provides them with a rent-free house provided he gets continued access to the girls. And, naturally, things immediately start to go pear-shaped. The girls are heard talking to someone, and electricity in the house seems to work sporadically at times. Lily sometimes appears in the yard with no clear indication of how she got there. More disturbingly, when questioned about Mama, Victoria often appears to be looking in the corners of rooms, as if asking permission to speak. When Lucas is pushed over the stair railing by some unseen force and winds up in a coma, Annabel is suddenly left in charge of the two feral girls and the increasing number of bizarre events around the house, and Victoria is starting to warn her that Mama is jealous in the extreme.

Here’s the thing—now that I’ve given you that much of the set-up of Mama, I’m guessing that you could come up with roughly 80% of what happens in the last hour of the film. Given a basic list of the characters in the film as well as their roles, you’d probably be better than 80% on determining who lives and who dies by the end as well. That’s the biggest disappointment here. Mama, despite the interesting premise and set-up, quickly devolves into being a film that tells exactly the story you expected it to tell. Once all of the pieces are in place, the story takes exactly the path of least resistance to get to the end credits.

Worse, or at least worse in terms of horror movie sins, the scares here are virtually all of the jump variety. Sure, there are a few good ones, but jump scares are a baby step above the basic gross-out in terms of horror movie chills and thrills. This is lowest common denominator stuff in terms of actually putting a little bit of fear into the audience, and it’s disappointing to say the least. Even the ending, which does have a single surprise, isn’t that surprising once we get there.

There’s potential here for a scary movie that is interesting and thoughtful and goes in some unique directions. Unfortunately, once we get past the premise, this isn’t it. Worse, parts of the film are so dark it's impossible to see what is happening. I wanted to like this a lot more than I did.

Why to watch : It’s clearly not the worst thing in Nikolaj Coster-Waldau’s filmography.
Why not to watch: It might well be the worst thing with Guillermo del Toro’s name attached to it.