My Return to Kubrick

When I started this a little more than a year ago, I watched several Kubrick films right away. I realized soon enough that if I kept it up, I’d be through all of the Kubrick-y goodness in a few months and have no Kubrick to look forward to over the long months and years to come. So I stopped watching them, despite the fact that I had ample opportunity to watch more of them. I figured if I was doing the same thing with Hitchcock, I could do the same with Kubrick. 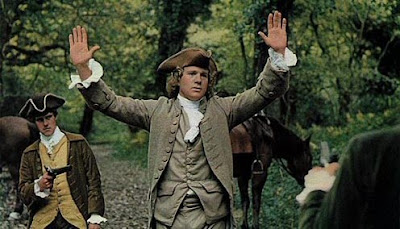 Well, it’s been more than a year since I screened a Kubrick film, so I figured I’d waited long enough. I’m not entirely certain why I selected Barry Lyndon save for the fact that it was immediately available to me, and I’ve made it a goal to continue watching a few long films every month so that I’m not buried by them at the end.

Barry Lyndon is the tale of a man born Redmond Barry (Ryan O’Neal) as he stalks through the various courts of Europe in the mid- to late-18th century. His goal is to live the life of a gentleman, something taken from him at a very early age when his father is slain in a duel over some horses. Barry is raised in the home of his relatives, where he falls in love with Nora (Gay Hamilton), his cousin. This is made complicated by the fact that the family is in dire straits for money, and thus wants to marry Nora off to a wealthy British officer named John Quinn (Leonard Rossiter). Barry engages to fight a duel with the man and slays him (he thinks), and is thus forced to go on the lam to avoid imprisonment. He’s immediately robbed, and forced into the British Army as a way to survive.

As it turns out, the duel was a sham, and Nora did marry Quinn after all. Now in the service, Barry gets his first taste of battle and decides he’s had enough. At the first opportunity, he steals the uniform of a courier and deserts only to be eventually pressed into service by the Prussian Army. It is here that his life changes again; Barry is assigned the task of playing servant to the Chevalier de Balibari (Patrick Magee). The Prussians believe the man to be a spy, but he’s really just a card cheat. Barry throws in with him immediately, and the two work out a scheme to keep them in money. Barry helps the Chevalier cheat at cards, and does the dirty work of dueling those who refuse to pay.

Barry’s life changes again when he meets the lovely Lady Honoria Lyndon (Marisa Berenson). Her husband, the sick Lord Lyndon (Frank Middlemass) confronts Barry, and then is so enraged by the young man that he immediately has a heart attack and dies. Barry marries the widow and officially tacks her family name onto his own, becoming Barry Lyndon.

So now we’ve seen the rise; it’s time for the fall, because no good epic story about a complete bastard can ever be without a fall of at least the same length as the rise. The newly named Barry Lyndon begins indulging himself at every possible opportunity. The two have a son named Bryan, but the heir to the estate and the Lyndon name is young Lord Bullingdon (played as a child by Dominic Savage, and as a young adult by Leon Vitali), Lady Lyndon’s son from her previous marriage. Lord Bullingdon and Lyndon take an immediate dislike to each other, one that continues to grow through the years.

A large part of this enmity is that Bullingdon holds the title, and should anything happen to Lady Lyndon, Barry, his mother, and his son will all be turned out without a penny between them. Lyndon, realizing this, spends a great deal of the Lyndon fortune in an effort to get himself a title. It all goes for naught when Bullingdon insults him publically and Lyndon beats his stepson severely. While this manages to get rid of the stepson, it also gives Lyndon a reputation for merciless cruelty, and he is abandoned by his society peers.

To pile tragedy on top of problems, Lyndon’s young son is killed in an accident, sending Lyndon into a spiraling depression of grief and alcohol. It all comes to a head when Bullingdon returns and challenges his stepfather to a duel. The results of said duel are better kept as a spoiler.

Bullingdon gets to shoot first, but his nerves cause the gun to go off prematurely. With his shot, Lyndon fires into the ground instead of at his stepson, essentially granting the boy his life. Whether this is from pity, or because he realizes that killing the lad will make him all the more hated isn’t clear. What is clear is that given a clear chance, he refuses to kill Bullingdon.

For this mercy, Bullingdon’s response is especially cold. Declaring that he has not yet had satisfaction, he takes another pistol and fires, wounding Lyndon in the leg. As a result, Lyndon has his left leg amputated below the knee. To finish him off, Bullingdon grants him an annual income of 500 guineas if he leaves England and never returns. Given that his only other option is jail, Lyndon takes it and returns to Ireland with his mother. He returns to his gambling ways, but never with any success.

The question here is one of crime and punishment as well as redemption. Is Lyndon redeemed by his actions at the end? I don’t know. I think it more likely that his redemption comes instead from the punishment he receives. But again, I don’t really know.

I also don’t know if I like it. Evidently, a great many people feel that this is one of Kubrick’s best films, and while it’s certainly pretty, I found very little here that got me excited. One man’s social climb and fall isn’t a story that excites me too much, and while everything here is beautifully filmed and appears to be exquisitely authentic, I sometimes found my mind wandering.

Where the film excels is the overall look. Kubrick is often at his most interesting when it comes to the visual style and appeal of his films, and Barry Lyndon does not disappoint. Many of the scenes are lit by candlelight, not just in appearance on screen, but in actuality; Kubrick used electric lighting only when absolutely necessary. This gives the look of the film another level of authenticity the really does play. It looks like 18th century paintings, which is almost certainly what Kubrick was after.

But this authentic look comes in the service of a very slow-moving plot in which the few points of actual action are the punctuation in some long sentences in which not much happens. As always, I’m impressed by Kubrick’s visual artistry. I just wish that for this film I were more impressed with the actual story taking place.

Why to watch Barry Lyndon: A great period piece with Kubrick at the helm.
Why not to watch: No one to root for.
Posted by SJHoneywell at 3:07 PM