Film: The Servant
Format: Streaming video from NetFlix on laptop. 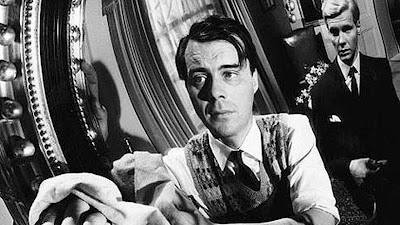 When I was an undergraduate, I majored in English literature. For those of you who didn’t major in literature, allow me to burst the bubble on a few notions. Yes, I’ve read a lot of the classics. No, I haven’t read them all. So, while I’ve read quite a lot of Shakespeare and Milton, I’ve read almost no Chaucer or Spenser. I’m good on Graham Greene and Joseph Conrad, shaky on John Donne, solid on Byron, Keats, Shelley, and Blake and woefully unable to carry on a conversation about Jane Austen or Wilkie Collins.

To the point, I’m almost completely unfamiliar with Harold Pinter, the author of The Servant, but I’ve read (mostly on my own, for enjoyment) a shit-ton of P.G. Wodehouse, particularly the Bertie Wooster and Jeeves stories. I like Bertie and Jeeves. They have an interesting relationship. For the uninitiated, I will give you the quick overview. Bertie is a relatively self-indulgent rich guy with a circle of equally layabout, wealthy friends. What sets Bertie apart is his valet, Jeeves. Jeeves is the ultimate gentleman’s gentleman—Jeeves is always right about everything. Most of the stories involve Bertie doing something of which Jeeves disapproves; often it’s something like wearing purple socks or spats resplendent in his school colors. Bertie gets into a terrible fix, usually involving someone trying to get him married. Eventually, Jeeves pulls him through and Bertie gives up the thing that annoyed Jeeves in the first place. These stories are fun and goofy, and entertaining as all hell.

Tony (James Fox) is a guy a little too wealthy for his own good. His wealth gives him a comfortable upper-crust existence, which makes him a little less ambitious than he should be. He’s just hired a large, empty house and requires a manservant to look after him while he works on his current project: planning the creation of a trio of cities in the Brazilian rainforest. He employs Barrett (Bogarde) to look after his day-to-day affairs, cook, dress him, and decorate the house.

Once hired, Barrett begins to insinuate himself into every aspect of Tony’s life. This starts slowly, with paint colors in the hallway and simple decorating advice. Whether because of this or simply because she finds him somehow despicable, Tony’s fiancée Susan (Wendy Craig) takes an immediate dislike to Barrett, a dislike that is evidently mutual. Regardless of this dislike, the romance between these two young, wealthy people continues apace, as does Tony’s career.

Things change when Barrett suggests that Tony hire a maid, and he has the perfect maid for him. This is Vera (Sarah Miles), who is introduced as Barrett’s sister, although it soon becomes evident that if she really is his sister, their relationship is a very disturbing one. Vera is a hard character to nail down. She presents herself as shy, almost painfully so when it comes to Tony, but she is actually a steaming cauldron of hormones who manages to seduce Tony while making it appear that he has seduced her. Except that Vera is actually Barrett’s love interest as well, and it’s evident that she has been encouraged to be more forward with Tony by Barrett himself. All of this comes to a head when Tony finds his servants together in his own bed, and his own infidelity with Vera is revealed to Susan.

From this point forward, Tony slowly spirals into depression and dissolution. Barrett reveals that Vera has played him false as well and convinces Tony to rehire him. However, Tony’s job appears to have faded away as well as his will to do anything but feel sorry for himself, and the roles of master and servant begin to flip, with Barrett beginning to order Tony around the house.

From what I’ve heard, having this as my introduction to Pinter works in my favor—it’s one of his better and most widely read and performed plays. It’s dark and severe and filled with the kind of existential anguish that marks a lot of works of its era. There’s a decadence here that is, honestly, sort of like watching trashy reality television. It’s ugly and painful and often disgusting, but it’s also completely compelling because it is so trashy. There is, for lack of a better word, a desire to see how close to bottoming out these two characters will get before the end of the film.

Dirk Bogarde was never a big name in Hollywood and did most of his acting in British films. Early on, he evidently did a lot of light comedy, which got him compared to Rock Hudson (his later-revealed homosexuality brings another point of comparison between the two. In truth, one of the reasons he flopped in Hollywood was his rejection of a sham marriage to keep him appearing straight). The Servant marked a turn in his career to more serious and dramatic roles. While I’m curious to see what those early comedies might have been like, a part of me thinks that Bogarde should have moved to serious drama earlier, because he’s devastating in this film. Everything turns on what he does, and he is magnetic on the screen. There is a sense of malice around him that is difficult to describe but unmistakable when seen. Everything he does is tinged with both contempt and smugness. The same is true of Sarah Miles, who is wide-eyed and dim when around Tony, but sly and wicked around Barrett.

There is a sense of fascination in watching someone else go to smash, and it is in full evidence here. A large part of that is the physical, emotional, and spiritual transformation of Tony through the course of the film. Most of it, though, is the fact that it is one of the most solidly acted films I have seen in a long time.

Why to watch The Servant: British drawing room drama as good as it gets.
Why not to watch: The painful descent into alcoholism and physical dissolution.
Posted by SJHoneywell at 8:13 PM