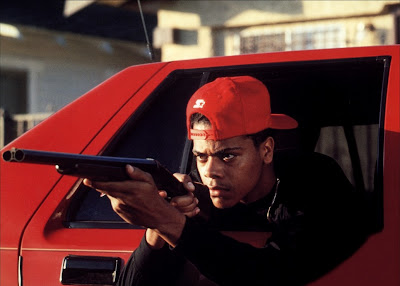 There are certain movies that fit me like a comfortable pair of shoes, and then there are movies that make me feel so far out of my element that I’m not sure where to look. John Singleton’s Boyz N the Hood didn’t make me feel whiter than some other movies I’ve seen, but I’ve never felt more sheltered or suburban than I did while watching this film. I can’t help the fact that I grew up in a white bread town and I don’t apologize for moving to a hick little burg in the middle of cornfields, and Boyz N the Hood is one reason why.

This is a story of open, urban warfare. The film begins with the statement that nearly 5% of all black men will be murdered, and that the majority of these deaths will be at the hands of other black men. The story that follows depicts this world in as much graphic and painful detail as possible to get this simple point across. It was true in 1991 when the film was made, and I’m guessing that it’s still true today in many of the tougher neighborhoods in this world. In fact, based on what a number of my students tell me, Boyz N the Hood is fairly tame.

We start in the mid-80s in South Central Los Angeles. Tre Styles (played at this age by Desi Arnez Hines II) is a bright young man with a temper and a penchant for getting into fights in school. His mother (Angela Bassett) sends him to live with his father, Furious Styles (Laurence Fishburne) in the hope that his hard-nosed father will teach him how to be a man and not just a thug.

At his father’s house, Tre meets up with some friends: Doughboy (Baha Jackson), Doughboy’s half-brother Ricky (Donovan McCrary) and Chris (Kenneth A. Brown). These four boys adapt to life in a rough and crime-ridden neighborhood as best they can, with Tre having the benefit of a father present. Tre manages to avoid most of the problems of his friends, and in fact witnesses Doughboy and Chris being dragged off by the police after being caught stealing.

Flash forward seven years. Tre (now played by Cuba Gooding, Jr.) is still bright, and does well in school. He also has a regular job and college plans. Ricky (Morris Chestnut) has also stayed close to the straight-and-narrow. He’s a football star at the local high school and is hoping for a scholarship at USC. He’s also a new father. Chris (Redge Green) is now in a wheelchair after some misfortune—possibly a gunshot wound—and Doughboy (Ice Cube) has been released from prison.

What happens is, essentially, days in the life of these young men. Ricky interviews with USC and is told that his grades are good enough, but he needs a 700 on his SAT. Should he get that, he’ll get a scholarship. Furious Styles tries to educate not only his own son, but the other boys as best he can. He works in real estate, and gives them lessons on the ideas (and resultant problems for the black community) on gentrification. It’s perhaps a little conspiratorial (don’t look at me—the bank still owns most of my house), but relevant and interesting.

Of course, in this world, not everything can go easily for too long. Ricky is forced into a fight with an unnamed thug from a different neighborhood, and Doughboy moves to protect him. This results in gunfire, revenge, and more revenge as these men attempt to, essentially, define their own manhood with weaponry in the only way they know how and in the only way they’ve been taught.

Ultimately, though, the film is not so much about the terrible violence or even the terrible cost in lives in these urban neighborhoods. Instead, it is about the choices that are made by those who live in this places and how these decisions affect them and those around them. Tre’s reaction to the shooting that affects him personally is natural and understandable, and also terrible. His ultimate reaction to this is perhaps a greater lesson here, a sense that what he has learned from his father is more than just the handling of a firearm.

This is more than likely the message that Singleton wants to get across in this film. The presence of and lessons from the father figure—a real father figure and not just a male—make a great deal of difference in the outcomes of the young men depicted here.

But of course, there are other themes here, too. This was Singleton’s first film as a director and as a writer, and like many young directors, he was filled with ideas he wanted to see on the screen. This is the reason for Furious Styles’s speech on gentrification. This is the purpose behind the importance of the SAT and the resultant complaints of cultural bias. This is the function of the self-loathing black cop who seems to plague Tre Styles at several different points in his life. This cop plays into another of Singleton’s themes: that of the ineffectiveness of the police in these neighborhoods, and thus the desire of many young men to seek justice on their own. They know that justice at the hands of society will be slow in coming, if it ever comes at all.

This is an amazing first effort from a director, and remains a powerful and moving film. It also proves that actors like Cuba Gooding, Jr. and Ice Cube started strong, even if they started taking lousy projects later in their career. Singleton needs to get back to this type of filmmaking instead of exploitative garbage, remakes, and sequels. Singleton is better than his later output—he’s Boyz N the Hood good, and that’s better than most.

Why to watch Boyz N the Hood: A true and tragic story of urban life.
Why not to watch: The reality has only gotten worse.
Posted by SJHoneywell at 2:23 PM