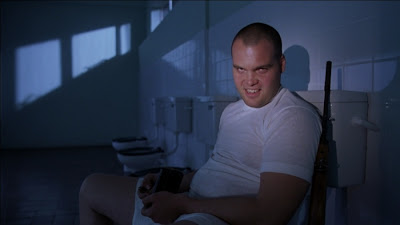 Some films are difficult to review because so much has already been said about them, coming up with something new is nearly impossible. Full Metal Jacket is like that in a lot of ways. This is a film that essentially has a standard opinion with which most people agree. The first half of the film is generally considered to be some of Kubrick’s best work, while the general vibe from viewers is that the film peters off in the second half, becoming more or less a standard war film, albeit a war film directed by Stanley Kubrick.

There is some truth to this notion, and the reason for it is pretty clear. Full Metal Jacket is a story told in two parts. This means that people will naturally make a favorite of one part and consider the other part to be considerably weaker. When this happens with a film as highly regarded as Full Metal Jacket, the stronger half of the film grows over time to become something much more than what it is, while the weaker half is diminished in the eyes of viewers until it is something unworthy to be watched. That was certainly in the neighborhood of my opinion going in, and it’s the opinion of almost everyone I know who has seen this film. The opening 45 minutes are as close to perfect as a film gets, and then Full Metal Jacket sucks.

Guess what. Not true. While I’m still of the opinion that the first chunk of this film is by far the stronger part, the second half is far better than I previously gave it credit for being. There’s a lot going on here that I never really wanted to pay attention to, simply because it was the second, inferior part of a movie that starts so strong.

For the most of the first part of the film, we are unaware of who the narrator is. Instead, we have a collection of men entering basic training in the Marine Corps. While several of these men are in most of the scenes, it soon becomes evident that we are focusing primarily on Gunnery Sergeant Hartman (R. Lee Ermey) and Privates Cowboy (Arliss Howard), Joker (Matthew Modine), and Gomer Pyle (Vincent D’Onofrio). Cowboy gets his nickname because he’s from Texas; Joker gets his because he can’t keep his big mouth shut; Gomer Pyle gets his because there’s not much he can do right.

This sequence of the film is as dehumanizing as almost any horror film I have seen. The men are stripped of their humanity and built into marines by the constant, brutal abuse of Hartman, who spares no pity for anyone, least of all Private “Pyle.” As the platoon screw-up, Pyle is constantly on Hartman’s bad side. Eventually, it gets to the point that Hartman starts punishing the rest of the men for each time Pyle does something wrong, which leads to retaliation, which causes Pyle to slip further and further into a sort of paranoid dementia. Eventually, on the night after graduation, Pyle slips his mental tether completely and guns down Hartman before turning the gun on himself. The complete stripping of humanity is done—the recruits have been turned into effective killers. D’Onofrio’s portrayal here is one of the best in his career—it’s safe to say that it’s the role that turned him into the actor he is.

And then we’re in Vietnam, and suddenly most viewers want to change the channel. It’s evident now (actually a little before this) that Joker is our main character. He’s in country, and he is a correspondent for Stars and Stripes. He frequently works with a cameraman nicknamed Rafterman (Kevyn Major Howard), who got the nickname because he’s never left the rear guard and has never been out in the action.

And then the Tet Offensive happens and Joker is sent out into the field with Rafterman tailing. Joker hunts up his old basic training mate Cowboy, is introduced around the squad, and they go out hunting for the Viet Cong, an action that essentially takes the rest of the film.

The question I have is why so many people seem to feel that this part of the film has no merit. While I freely agree that it doesn’t have the same power as the opening, which essentially has at its heart the idea that the military wants to train men to kill without question and without mercy, essentially removing their humanity to turn them into weapons, I disagree that the second half is considerably worse. It’s actually still very compelling, in no small part because of the personalities we encounter in Cowboy’s squad. There is Crazy Earl (Kieron Jecchinis), who celebrates his position in the war and fears its ending. There is Animal Mother (Adam Baldwin), who is one step away from homicidal mania and is also the type to whom nothing bad in a war really happens. We meet Eightball (Dorian Harewood), who appears to be the only thing that keeps Animal Mother in line.

What we see here is that the war is just as dehumanizing and terrible as the training. Perhaps, because this is the reality, this is why the training is so brutal and crushing. The only way to come out of the war intact in any way is to reach a point where nothing matters, where life and death are merely states of existence. When a member of the squad is killed, there is some remorse and a little sadness, but not much. No one can afford it.

Is it the best film about Vietnam? No—that’s Apocalypse Now. But it’s right underneath it.

Why to watch Full Metal Jacket: The first 45 minutes and R. Lee Ermey’s coming-out party.
Why not to watch: Its reputation for ending weakly might keep you away.
Posted by SJHoneywell at 9:24 PM