[These two reviews have been included as a part of Pussy Goes Grrr's Juxtaposition Blogathon!]

I find films that take place behind the Iron Curtain fascinating. I can’t help it. There’s something about them that I instantly find compelling. I’m sure the reason for this is that the ones that I get a chance to see tend to be the better ones—the bad ones don’t get exported. Regardless, it’s undeniable that I find the existence of people in that sort of repressive, overwhelming environment riveting. 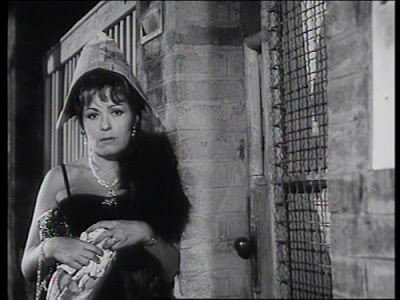 Ucho (The Ear) is a Czech film that fits this description perfectly. While there are a number of bit parts in this film, and a few people who become prominent for about 10 minutes in the middle, the bulk of the film centers entirely around two people, a married couple. These are Ludvik (Radoslav Brzobohaty), a government official and his wife Anna (Jirina Bohdalova), the hard-drinking daughter of a pub owner. As the film starts, the pair is returning home from a party, but their gate is locked, and neither one appears to have the key. Eventually, they get into the house, and they discover that things are…different.

The power is out, for one thing. So is the phone. Things are missing, or are subtly moved around. This, coupled with some remembered conversations at the party causes the couple to start moving much more warily around the house. Ludvik’s superior has been arrested along with several other men in the same government area that he works in. Naturally, the question that Ludvik is asking is whether or not he’s next. Anna doesn’t seem too concerned with what will happen to Ludvik aside from the fact that it will affect her life greatly—and she is concerned about that. And both are convinced that while they were at the party, bugs have been planted in the house.

What we see as the film progresses is all of the frustrations of the last ten years of this marriage boil up to the surface and break open, aided by the intense paranoia and fear that Ludvik might be dragged off to prison for any reason at any minute. We learn, for instance, that Anna’s drinking isn’t simply because of the party; she drinks all the time anyway and would probably be drunk even without the party. We learn that it’s likely that Ludvik consented to marriage with the wanton Anna rather than his virginal former girlfriend because Anna came with a sizable dowry.

What is most fascinating to me in this film, especially because of how effective and believable it is, is how quickly Ludvik and Anna go from anger and hatred to mutual protection. As their feelings bubble out, it’s easy to think that there is no love lost between them; this is especially true when Ludvik becomes abusive of his wife. And yet, every time there is evidence of tampering in the home, or every time one of the pair thinks of something possibly incriminating, they immediately bond together. Anna yells at him for burning files in the bathroom and throwing them in the toilet, but immediately takes over and does the same thing when he takes a break.

The “ear” in this film isn’t a literal one but a figurative one. These are the spying devices most likely planted around the home to catch conversations that might well go against Czech policy or otherwise contradict the country’s leader. Throughout the bulk of the film, we simply assume that these exist somewhere in the film’s world. This in turn makes the conversations between our two characters highly charged emotionally, but also filled with hyperbole, double-speak, and a lot of veiled allusions to what is probably going on around them.

The end (which I won’t reveal) is chilling.

Ucho was suppressed the minute it finished filming. The film did not get a release until 1989 despite being made in 1970. It is hardly surprising that the Czech government suppressed this film, since it’s hardly a positive portrait of anything going on in Czechoslovakia. It’s a worthy film, though, and intense enough to still be more interesting than a film with two people walking around their house has any right to be. 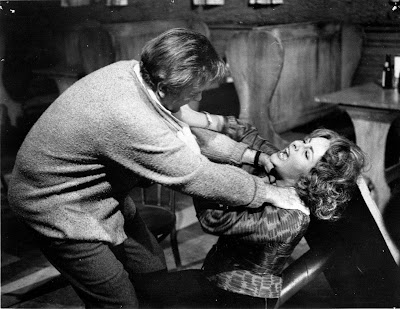 The film that Ucho is most commonly compared with is Mike Nichols’s debut, Who’s Afraid of Virginia Woolf? for the marital dynamics, not the who “suppression by the government with bugs” thing. And, boy! There sure are some similarities here! George (Richard Burton) and Martha (Elizabeth Taylor) are a married couple who have two pastimes—they drink and they fight with each other. George is a history professor at a small college and Martha is the daughter of the university president. After a party at her father’s house, Martha has invited a new professor named Nick (George Segal) and his wife, who goes by Honey (Sandy Dennis) back to their house so everyone can keep drinking.

What results is less a film with a plot and more a set of character studies, with the characters studied being the marriages. George and Martha have a marriage that consists of aggression fueled by drinking and drinking caused by unbridled aggression. They do nothing but pick at each other constantly, attempt to embarrass each other and attempt to break each other mentally and emotionally. As the film goes on, it’s not so much that cracks appear in the marriage, but that the marriage appears to be nothing but cracks.

What becomes evident quickly is that Nick’s and Honey’s marriage is also riddled with cracks that they were unaware of. Nick is relentlessly and aggressively ambitious, and will not hesitate to sleep his way to the top with the daughter of the university president. That’s Martha, for those of you playing along at home. And Honey seems to have a thing for brandy.

We learn all of the dirty details of these people in the course of the evening. We learn that George has been a part of the history department at the college for years, but will never be in charge of the history department because he doesn’t have the ambition, drive, or talent to head the department. In Martha’s eyes, this makes him a failure and completely worthless. We learn eventually that Martha’s world is one of dark fantasy. Her pleasures are one overriding fantasy and her constant cruelty of her husband.

What makes this film work, though, is that through all of this—through all of the horror and pain of this terrible, twisted relationship, these two people are entirely dependent on each other. They cannot survive without each other. George genuinely loves Martha, something she freely admits. She also admits that she isn’t worthy of it, and that some day she will push things too far and that this twisted life will come crashing down—and that it’s what she deserves.

This is a difficult film, one that I feel enriched in having seen, but one that I will probably not watch again for a very long time. It is brutal and unrelenting, a punishing film that seems intended to push boundaries as far as they could go in 1966. It succeeds in doing this, too. It’s a compelling watch—it’s just ugly to see these people go to smash in front of us.

The movie is based on the Edward Albee play of the same name, and it’s pretty faithful in general. While it has certainly been staged a number of times, I can’t envision it being staged more effectively than this filmed version. All four of the performances rank among the best of the respective players’ careers. Consider how rare it is to have four actors simultaneously perform at the tops of their respective games on the same days. For no other reason, this film is worth watching for that. It’s punishing and awful, but it is awful in the original sense of the word.

Why to watch Ucho: It’s tense as hell.
Why not to watch: The world it depicts is mostly gone.

Why to watch Who’s Afraid of Virginia Woolf?: It’s a classic for a reason.
Why not to watch: Being around drunk people for a long time kinda sucks.
Posted by SJHoneywell at 11:52 PM