The Wheels on the Bus go 'Round and 'Round

Tragedy, according to ancient Greek fuzzyhead Aristotle, comes from someone making a terrible mistake and undergoing a terrible reversal of fortune. Typically, people think of traditional tragedy as coming from a character flaw, which results in an inevitable conclusion. Regardless of it being a mistake or a flaw in the person him- or herself, classic tragedy comes not from chance or random fate, but as a matter of course. We expect the ending we get, because the ending is in a sense pre-ordained. 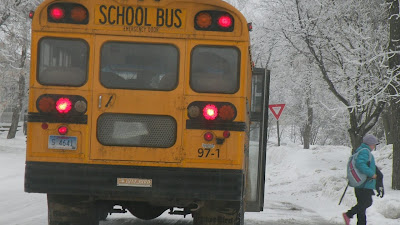 Today, though, tragedy is more or less the word used for any terrible event regardless of how it happens or what brings it about. The central event of Atom Egoyan’s The Sweet Hereafter is not a classic tragedy, but a modern one. In a small town in British Columbia, a school bus accident has killed many of the town’s children. This has naturally left the town in an emotional shambles.

In the wake of the accident, a lawyer named Mitchell Stephens (Ian Holm) arrives in town. It’s his contention that the town needs to act quickly if they are to receive any damages by claiming that the bus was faulty. Initially, the parents resist this idea, still mired in their grief, but eventually, Stephens convinces them that a class action suit is a good idea. Eventually, the case comes down to the testimony of a surviving victim named Nicole Burnell (Sarah Polley), who was paralyzed in the crash.

A great deal of the film comes out in flashback as Stephens speaks to a childhood friend (Stephanie Morgenstern) of his daughter, Zoe (Caerthan Banks). It becomes evident very quickly that in many ways, he is dealing with a more traditional tragedy of his own. Zoe has been addicted to drugs for years, and is in and out of rehab centers, clinics, and halfway houses. Much like the people of the town have lost their children, he has lost his own, and in a real way, he empathizes with their plight.

This film could have gone in a number of directions, almost all of them bad. A nudge here, a twist there, and this becomes melodrama. A tweak in one spot or another turns it into maudlin farce. Instead, the film is very tightly controlled throughout. We aren’t thrust into the tragedy, but moved into it slowly. We’re given the small details of the people and of the day that the accident occurred on as the film progresses, allowing us to, in a way, ease into the pain that we know will come eventually. From the first ten minutes in, the moment we first see the bus that has been pulled from the water, we know where we are going, but we are given the mental and emotional room to get there on our own.

How does one react to this film? Personally, I think. There is no specific or general reaction to a film that has such enormous potential for reaction. Many a person will rip through a box of tissues as this film goes on while others will respond with a sort of numb shock. In other words, people will react in ways much like the parents of the children themselves. There is no correct response for this, because every response will be a personal one.

Part of the wisdom of this film is that it presents the people here as real, and their lives as real. The town is not as idyllic as we may wish to believe at first. The sorts of problems that people have in the wider world happen here. Abuse happens. Affairs happen. Private tragedies—real tragedies—go on and give us new ways to look at what has happened and what will happen with these shattered lives and broken families.

The Sweet Hereafter is a masterful piece of filmmaking. If Atom Egoyan never made another film after this, he’d be remembered for this one. For a film that could have so easily been something awful and brutal, it is surprisingly beautiful. I cannot truthfully say that I enjoyed this film; the pain of innocent people is not on my list of pleasures. I can’t say I want to watch this again. I can say that unlike many films that seem to wallow in misery and self-pity and a need to wring every last emotional response out of its audience, that this film feels real and honest. It is a punch to the gut, but is the sort of punch that makes the viewer come away whole. Sometimes we break so that we can rebuild stronger. This film is like that. But I don’t want to break this way again.

Why to watch The Sweet Hereafter: Because life goes on after tragedy.
Why not to watch: How much tragedy do you need?
Posted by SJHoneywell at 11:58 PM