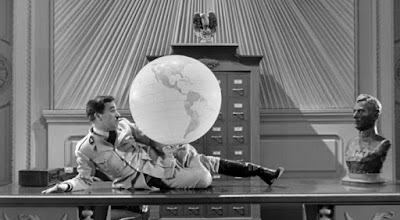 Everyone has gaps in his or her viewing. In fact, one of the main reasons I created this site seven(!) years ago is because there were so many gaps in my viewing history. Try as I might, I’m never going to fill them all. There are just too many movies and too many good movies to see to have seen everything. I’ve seen a shit-ton of movies in my life and a shit-ton since I started this site, but I know that there are many people who have seen far more than I have. Even if I watched two or three movies per day, I’d never catch up to everything worth watching. Still, you fill the gaps where and when you can, and for me, the biggest gap I know of has been The Great Dictator. Well, no more.

The Great Dictator is Chaplin’s first all-sound, all-talkie film, and it comes years after Modern Times, his list pseudo-silent. Part of that comes from the fact that Chaplin worked on The Great Dictator actively for nearly two years. When he first came up with the idea of doing the film, a number of people felt that he was taking on Hitler for no good reason. By the time the film was released, there was a shooting war in Europe, the Holocaust had started, and the U.S. was a year away from entering the war.

Basically, The Great Dictator is a version of “The Prince and the Pauper” moved into the modern world and with a much more political slant. A Jewish barber (Chaplin) fights in the First World War for the country of Tomainia, which is standing in for Germany here. Tomainia loses the war, and while the barber manages to rescue a pilot named Schultz (Reginald Gardiner) from being killed, the barber is afflicted with amnesia and is put into a hospital for 20 years. During those 20 years, Tomainia undergoes radical changes including the rise of a dictator named Adenoid Hynkel (also played by Chaplin). Hynkel’s policies are a complete destruction of individual freedom and persecution of Jews. Our Jewish barber manages to escape from the hospital, and, unaware of the changes that have happened, returns to his home town and his abandoned barber shop to rebuild his life.

Unfortunately for him, he runs into trouble almost immediately, fighting back against Hynkel’s Stormtroopers because he doesn’t understand the political reality of the world he now lives in. He is initially rescued by Hannah (Paulette Goddard), but is eventually captured and nearly lynched, except that his near-lynching is witnessed by Schultz, who is a leading member of Hynkel’s new order. When Schultz falls into disfavor because he disagrees with the attacks on the Jews, the barber’s neighborhood falls under attack and he is dragged off to a concentration camp along with Schultz.

Meanwhile, Hynkel, with advice from Herring (Billy Gilbert) and Garbitsch (Henry Daniell) believes he can become the dictator of the world. His first step would be in attacking the bordering country of Osterlich. Unfortunately, a rival dictator named Benzino Napaloni (Jack Okie) from the nearby country of Bacteria has already placed his troops on the Osterlich border.

Eventually, we’ll get a situation where the barber is mistaken for Hynkel and Hynkel is mistaken for the barber, but this really doesn’t happen until the concluding couple of scenes of the film. Much of the film is essentially leading up to this moment, but a great deal of what we see is episodic and dealing with the situations of the barber and his neighborhood and Hynkel dealing with his advisors and his policies.

That’s really the weakness here—while there is a specific plot, a great deal of the film is completely tangential to that plot. Much of the film instead centers around Chaplin doing what he did best—physical comedy that works in a sound context but would have generally worked just as well in a silent film. There is some tremendous physical comedy here throughout the film. It’s evidence that one of the best ways to deal with terrible problems and horrible evil is to find a way to laugh at it.

Jack Okie was nominated in a supporting role, and he’s not on screen that much. He doesn’t even show up until close to the end of the film. Okie is incredibly memorable, though, doing an almost perfect physical impersonation of Mussolini. There is a wonderful set of competitions between Napaloni and Hynkel throughout, with Hynkel trying desperately to be more physically imposing or impressive than his dictatorial rival. This culminates with a battle of barber chairs and eventually ends in a food fight.

Really, though, The Great Dictator is memorable for three scenes--Okie is incredibly memorable, though, doing an almost perfect physical impersonation of Mussolini. There is a wonderful set of competitions between Napaloni and Hynkel throughout, with Hynkel trying desperately to be more physically imposing or impressive than his dictatorial rival. This culminates with a battle of barber chairs and eventually ends in a food fight.

Really, though, The Great Dictator is memorable for three scenes—Hynkel’s dance with the globe, the speech at the end, and anything involving Jack Okie. It is in many ways a great film, but it suffers from many of the same issues that Chaplin’s longer works do. The middle feels mushy, like it’s there for schtick and Chaplin being Chaplin, and not really in service to the plot. It’s absolutely worth seeing and a critically important film for many reasons. But it’s not a perfect film for as good as it is. Fortunately, allowing Chaplin to be Chaplin covers up a lot of holes, and it’s only in retrospect that the film feels episodic.

Why to watch The Great Dictator: It’s rightly considered one of Chaplin’s great films.
Why not to watch: Chaplin’s work is more episodic than it is a solid narrative.