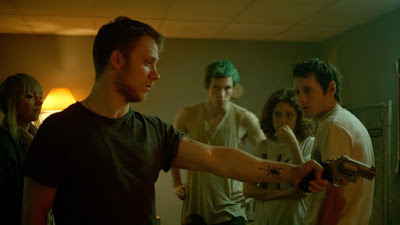 I don’t go to the movies that often, but I do pay attention to the movies that are released. After all, a chunk of them are going to show up on my various Oscar lists and the 1001 list every year. Green Room isn’t that sort of movie, of course, but I kept my ears open about it because the buzz on it was very good. So, when I came across it at one of the libraries I frequent, it was a no-brainer to check it out. I’m not about to call Green Room the second coming of horror movies, but I’m pleased to report that it’s a tight thriller that skimps on nothing.

The members of the band the Ain’t Rights wake up one morning in a cornfield, having driven off the road the night before. A pair ride a bike toward the nearest town and siphon off some gas to get back on the road and continue on their way. Eventually they reach their destination and are interviewed by Tad (David W. Thompson) for a local college radio station. He’s also promised them a gig that has fallen through. He lines up another one for them. The upside is that it will pay them $350. The downside is that it’s at a neo-Nazi club in the middle of nowhere in Oregon. Needing the money, the bad accepts the gig.

They survive the set and are preparing to leave after getting paid. And then everything goes wrong. As the band’s singer Tiger (Callum Turner) and drummer Reece (Joe Cole) head out to the fan, guitarist Sam (Alia Shawkat) realizes she has left her phone back in the green room. Bassist Pat (Anton Yelchin) goes back to get it for her and sees a scene of chaos. During their set, a member of the headlining band has killed someone in the green room. Amber (Imogen Poots), the victim’s friend, tells him to call the police, which he does, but the call is interrupted when the club’s bouncers Big Justin (Eric Edelstein) and Gabe (Macon Blair) confiscate the band’s phones. They are all thrown back into the green room with Big Justin standing guard over them.

It should come as no surprise that most of the rest of the film comes down to the Ain’t Rights attempting to get out of the club while the club workers decide what to do. Eventually, the club owner (Patrick Stewart) shows up and immediately takes charge. His solution is to keep the number of people who know what happened to a minimum and to clean up the problem as quickly a possible. That means killing Amber and the band and staging it to look like something happened that was caused by the band. The problem for the band is that there is only one way out of the green room, and outside is filled with skinheads who want to make their problem go away at the expense of the band.

The band tries several times to get out, and each time gets more and more beaten up. The attack on Pat is extremely brutal, or so we’re led to think, until worse and worse happens to everyone involved. Casualties, brutal, brutal casualties are taken on both sides as the terrible events of the night spiral further and further out of control.

There’s a lot to like with Green Room. One of the first things to like is that while this is clearly a story that could happen in the real world, making it more a thriller than a horror film in my personal categorizing, there are clearly elements of horror here. There’s too much blood and violence for this to be classified any other way. While a lot of the violence happens in the middle of emotionally charged scenes, there are several moments of real violence that happen with a sort of cold, calculated nonchalance, a lot of that coming from Amber. There is a shocking coldness to Amber. She’s not one of the villain here, but she might be the scariest thing on the screen at times.

There are also some damn fine performances. Imogen Poots is that ice-cold killer through much of the film. Patrick Stewart is Patrick Stewart, which means that he’s awesome, C’mon, it’s Patrick Stewart and he’s hard to top. Anton Yelchin is surprisingly effective here as well. It was initially annoyed with his performance; his voice is very quavery and I found it annoying until I realized just how true that reaction would be. I immediately understood that Yelchin’s performance is actually near-perfect. It goes to the point that Green Room really feels like something that is happening.

Green Room is how you do this sort of horror film. You take a solid premise, one that is unusual but not unthinkably impossible. You get the protagonists out in the middle of nowhere. Attack the protagonists repeatedly from different directions and with a variety of weaponry. Keep digging everyone on both sides deeper and deeper. And, most of all, make people smart on both sides of the conflict.

Green Room does all this and more. It’s not something I would show my wife, but I am entirely pleased that I got to watch this.

Why to watch Green Room: This is how you do bad-ass.
Why not to watch: It’s Anton Yelchin’s last movie, and that’s incredibly depressing.

Posted by SJHoneywell at 6:09 PM